My name is Rose and I am a Canadian freelance writer. I love to tackle human rights issues and anything related to the betterment of society and our planet.  For a sorted directory of my articles: RoseWrites.netboard.me Love to write too? Join me on here on InfoBarrel.
InfoBarrel is a writing platform for non-fiction, reference-based, informative content. Opinions expressed by InfoBarrel writers are their own.
InfoBarrel > Lifestyle > Pets & Animals > Cats

Some myths, facts, and feline emotions

Since I was a year old, I've always had a cat or two in my life. I love dogs and other pets too (so please don't peg me as a crazy cat lady).

In a big city, cats are just easier to keep and provide for (especially without a yard). When I rented apartments, most landlords were fine with me keeping a cat or two on the premises.

One thing I can always sense is when one of my furry friends is watching me.  There is a presence in the room. (Not a creepy poltergeist-type feeling, just an energy in the room). I've asked other cat owners about this and they expressed the same hunch.

Every writer I know owns a cat. Or perhaps I should rephrase that: every cat owns a writer.

Today, I thought I'd present some lesser known facts about cats and some new research by Dr. Barbara J. King, an anthropology professor at Oklahoma university.

Yet, in dim light, they see about 7 times better than we do

Apparently our feline friends have six to eight times more rod cells in their retina than we do. The rod cells are the light receptors - which translate into black and white tones. In dim light, they can also sense motion better than us. Cone cells are responsible for color vision. Cats do see color, however, but not as wide a range of colors as we do.[1]

"You're not going to see what's-his-face again?"

Can they sense when someone isn't right for us?

I think many cats (and other animals) can sense a "good" person from a shady character. My proof comes not only from my failed dating experiences, but from two harrowing incidences in my life.

One time, my apartment was broken into and the thief left my hallway door open. My two cats always used to dash out the door every chance they could to greet me (especially if I had groceries). On this particular day, they both hid behind my TV stand - obviously aware of a bad guy around.

Another time, we had firemen frequent our area to check for a gas leak. My cats loved these guys. In fact, one followed a young firefighter right out the door and rolled around on the driveway under his feet.

Key point: I think cats do sense whether someone is a nice person or at least compatible with you (in case you are a bit shady). What do you think?

According to the Arizona Humane Society,[2] there are five clearly recognizable feline facial expressions: happy, frightened, angry, content, and playful. I will argue there are more, but perhaps they are less obvious.

Ears are an excellent indicator of emotion, in felines. If a cat's ears are flattened out to the sides, s/he is upset. If a cat proceeds to point it's ears back, watch out. In addition, if a cat's eyes are dilated with fur standing on end - then your cat has seen the enemy (whatever that may be).

Purring is thought to be a sign that a cat is happy, however this is not always the case. Felines sometimes purr when they are injured, giving birth, or in the process of dying. In an article by Paul D. Pion DVM, DipACVIM (Cardiology) and Gina Spadafori,[3] Dr. Margie Scherk likens purring to the human smile. It can also mean "don't hurt me, I'm nice."

I used to feel a cat swishing her tail around was annoyed. Now, I'm not so convinced. I think some cats like to wave their tail about more than others. For sure, though, when they walk with their tail straight up, they are content.

Cats clean themselves for other reasons too

Cats like to be clean and groom themselves regularly. But did you know that cats may groom excessively when under a great deal of stress? I had a cat that licked her belly until it was almost bare when my man-servant brought home another kitten.

Other reasons for excessive licking include: pain, nerve pain, matted fur, allergies, parasites (fleas, mites, lice, and ticks), change in diet, emotional problems (including depression, OCD, and paranoia). It's best to consult a veterinarian who can determine the root cause and prescribe the appropriate treatment.[4]

A little known fact is that cats can cool themselves by licking their fur. As their saliva evaporates, it cools their bodies.[5] Even so, cats can tolerate the heat fairly well and like to be warmer than us. Their ancestral roots indicate they thrived in hot climates, such as the desert.[6]

How do cats sweat? Through the pads of their paws.[7] They will even leave footprints behind if they are walking while "sweating."

Felines prefer to be warmer than us 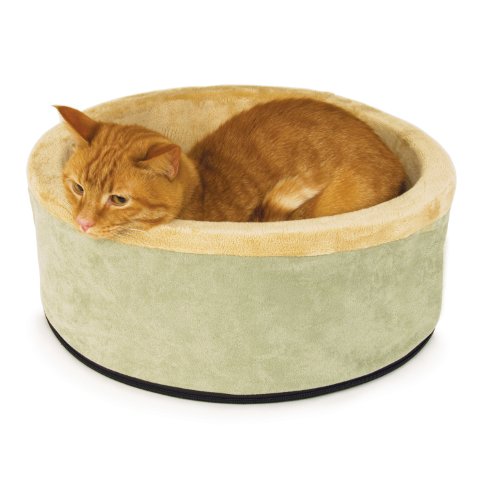 K&H Manufacturing Thermo-Kitty Bed Small Sage 16-Inch 4 Watts Amazon Price: $67.99 $23.69 Buy Now(price as of Feb 8, 2016)
This is Kady's favorite place to nap. What impressed me most about this bed is the removable cover which I vacuum and wash regularly. A 4-watt heater and thermostat maintains a temperature about 10 - 15 degrees F higher than the surrounding air in the room. (In Celsius, for Canadian friends, felines like to be about 39 degrees).

I think they do. When we had to euthanize our beloved cat Pika, our other cat Boo wept. She seemed to mourn her loss for a few weeks. I'm not sure all cats cry though, since I had the hardest time finding supporting evidence.

Of course, a weepy eye(s) in your feline friend should be checked by a veterinarian since the most cited cause appears to be physical (such as infection, injury, or allergies). Still, I wonder if any cat owners out there believe their cat has shed real tears (out of sorrow) too.

Barbara J. King, Ph.D. Professor of Anthropology[8] seems to support my feelings (and perhaps yours too) stating: "My definition of grief requires that an animal's normal behavior routine is significantly altered..." (taking into account body language, vocalizations, social signals, and failure to eat and/or sleep as well).[9]

Apparently this cat was bumped in the nose by his owner: 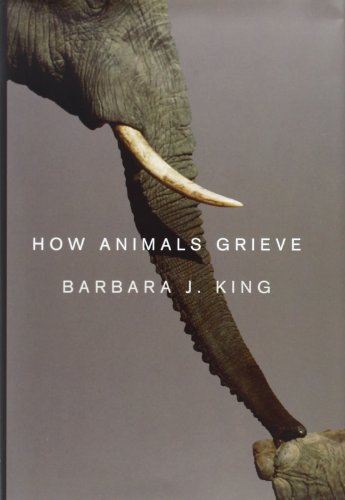 How Animals Grieve Amazon Price: $25.00 $11.35 Buy Now(price as of Feb 8, 2016)
Dr. King provides compelling evidence that animals feel emotional attachments and grieve losses much like we do. It may be widely known that larger animals mourn (such as elephants, dolphins, and chimps) but I found her research on smaller creatures (like cats, turtles, and birds) fascinating.

Can cats be friends with their natural prey or predators?

They sure can. When I was growing up, our cat Mittens often slept on the porch with our neighbor's dog Flip (a black Labrador retriever).

I found numerous YouTube videos of cats being friends with mice and rats. Although I was surprised to find video proof of a cat and a skunk getting along, the shocker for me was a cat that befriended a bird.
Dr. Patricia Wagner, a veterinarian at the ASPCA (American Society for the Prevention of Cruelty to Animals), published an incredible 2:11 video (shown next) of a cat named Nubbins. Unfortunately, Nubbins required extensive ear surgery to remove tumors, but once he recovered, Dr. Wagner adopted this grateful cat (who appears to adore her pet parakeet).[10]

See Nubbins with Dr. Wagner and her parakeet: