InfoBarrel is a writing platform for non-fiction, reference-based, informative content. Opinions expressed by InfoBarrel writers are their own.
InfoBarrel > Travel & Places > Places > Greece

Some of the most inaccessible places on earth are religious in nature.  From a variety of religions, some of these spots are off-limits except to all but a select few individuals. Sorted from most to least accessible as counted by the number of people who have access, let's do some virtual tourism together.  We will visit Saudi Arabia, Greece, Rome, Japan, and Ethiopia and explore the sacred places of Orthodox Christians, Muslims, Shinto, and Roman Catholics.

Mecca, Saudi Arabia is a religious traveler's paradox. If you are an able bodied Muslim, you have to visit at least once in your lifetime. If you are not a Muslim, you are prohibited from entering the city.

Mecca is located 73 km (45 mi) inland from Jeddah in a narrow valley at a height of 277 m (909 ft) above sea level.  The population in 2008 was 1.7 million, but that more than doubles every year during Hajj period held in the twelfth Muslim lunar month of Dhu al-Hijjah.  More than 13 million pilgrams visit Mecca each year and the city's economy is based around servicing the pilgram's needs.

As the birthplace of Muhammad and a site of the composition of the Quran, Mecca is regarded as the holiest city in the Islamic faith.

The Saudi's have been busy destroying the history of Mecca. Because the officially-approved form of Islam in Saudi Arabia, Wahhabism, is hostile to any reverence given to historical or religious places of significance for fear that it may give rise to idolatry,  it has been estimated that since 1985 about 95% of Mecca's historic buildings, most over a thousand years old, have been demolished. These historic sites of religious importance destroyed by the Saudis include five of the renowned "Seven Mosques" initially built by Muhammad's daughter and four of his "greatest Companions": Masjid Abu Bakr, Masjid Salman al-Farsi, Masjid Umar ibn al-Khattab, Masjid Sayyida Fatima bint Rasulullah and Masjid Ali ibn Abu Talib. They have also bulldozed the house of Khadijah, the wife of Muhammad, demolished to make way for public lavatories; the house of Abu Bakr, Muhammad's companion, now the site of the local Hilton hotel; the house of Ali-Oraid, the grandson of Muhammad, and the Mosque of abu-Qubais, now the location of the King's palace in Mecca. Fewer than 20 structures now remain in Mecca that date back to the time of Muhammad.

If you are not a believer in Islam, you will need to content yourself with looking at photos and watching videos about Mecca.

The Greek Isles are a peranneal tourist destination, but there is one autonomous and ancient area that is completely inaccessable to most of the world's population. No females are allowed and no one under 18 is allowed to stay over night. A very limited number of non-orthodox men are given access, limited to 10 men per day.

Credit: Wikipedia Creative CommonsMount Athos is a 390 km² peninsula that houses some 1,400 monks in 20 Eastern Orthodox monasteries. An autonomous state under Greek sovereignty, entry into the area is strictly controlled by permit.

The story goes that the Vigin Mary visited and asked her Son to give her the Mount Athos as a garden.  It has been dedicated to the Virgin and her alone ever since. The no females rule is also thought to make living in celibacy easier for those who have chosen to do so. Monks state they feel that the presence of women alters the social dynamics of the community and therefore slows their path towards spiritual enlightenment. The rules have been bent occasionally, like to shelter refugees in WWII.

A fair bit of advance preparation and battling with bureaucracy is necessary to visit Mount Athos, since only 100 Orthodox and 10 non-Orthodox visitors per day are permitted.

Once you have a permit you must obtain prior written consent to stay at a particular monestary, which is free for the first night.

Although the territory is technically a penninsula, access is only by ferry or water taxi and rough seas often cancel sailings. There are also sightseeing boats that do tours around the peninsula without landing. Since there is no permit needed if you are not landing, the sightseeing boats are the only opion for women who want to get a glimpse of Mount Athos in person. The other way to see the life and art is to watch the amazing 60 minutes piece on Mount Athos below.

Mt Athos is a UNESCO World Heritage Site, and the monestaries contain countless priceless religious artifacts, books, painting, and other art collections.  Some of the buildings are a thousand years old, and there are many amazing gardens.

The Vatican Secret Archives are not accessible to the public and are officially the personal property of each Pope for the life of the Pope.

The Archives are not completely restricted however, because about 1000 researchers are allowed to consult the Index and request documents which can be examined in the Archives reading room.

This first very unusual video tours the Secret Archives which contain about 1000 years of documents forming the collective history of both the Roman Catholic Church and most of Europe, as well as many other parts of the world.

The second video is much longer and tells a broader story of the Vatican, including how Neapolitan stole the Secret Archives and moved them to Paris, which messed up the library pretty badly. Many documents were lost, given to people to wrap fish or burn for heat since the Vatican did not have the money to move them back to Rome.  As a result of this disruption, interesting documents are still resurfacing today.

For 75 years after the death of a Pope, the records are sealed.  In the video you can see the steel cage containing Pope John Paul II's records which are not even accessible to the archivists.

Credit: Wikipedia Creative CommonsThe Ise Grand Shrine is one of the most sacred places in Japan. Dedicated to Amaterasu, the Sun goddess, the shrine was first built in 4 BC (over 2000 years ago) and the main shrine is said to contain the single, most important item in Japanese imperial history, the "Naik". This is the mirror of mythology is said to have passed to the first emperors of Japan and continues to be a source of power today.

The shrine is demolished to enable rebuilding every 20 years, honoring Shinto ideas of death and rebirth.  Next rebuild it in 2013. Obviously during the destruction and reconstruction workers have access, so it is not as exclusive as the final shrine on this list.

Once constructed, the shrine is barred to anyone but the priest or priestess, who must be a member of the Japanese imperial family. You can see the outside but the inside is barred.

#1 Chapel of the Ark of the Covenant, Axum, Ethiopia

In the ancient city of Axum, Ethiopia, spiritual center of the Ethiopian Orthodox Church, there is a small building that only one person is allowed to enter.  The monk, Abba Tesfa Mariam, is the keeper of the ark of the covenant, and once he enters he is never allowed to leave the compound again.  Believed to be a descendant of Aaron, and a high prest, each keeper generally names his own replacement. Credit: Wikipedia Creative CommonsMany may dispute the claim in the Ethiopian royal chronicles that the Ark left Jerusalem in the days of King Solomon. The legend says that Menelik[2], the son of King Solomon and the Queen of Sheba, visited Jerusalem to see his father. When he returned to Ethiopia with a contingent of Israelites and priests who were to establish the worship of the true God in his future kingdom, the Ark was secreted out of the city and into Ethiopia. The Bible tells of a meeting between the monarchs (1 Kings 10), but not a marriage or Prince Menelik, though some suggest that Song of Solomon is about a romance between the fabled Queen of Sheba and King Solomon.

In the book Sign and the Seal: The Quest for the Lost Ark of the Covenant, Graham Hancock traces a possible route that the Ark of the Covenant could have taken, weaving a pretty convincing case that the actual Ark is in Axum in the Treasury Building next to the Church of Our Lady Mary of Zion.  Ark or no Ark, the building definitely contains priceless treasures that are brought out for display occasionally like the crowns from the Ethiopian Monarchy.

The restrictions on entering are for your own good.  The Ark of the Covenant has a history of killing people who are curious or get too close. 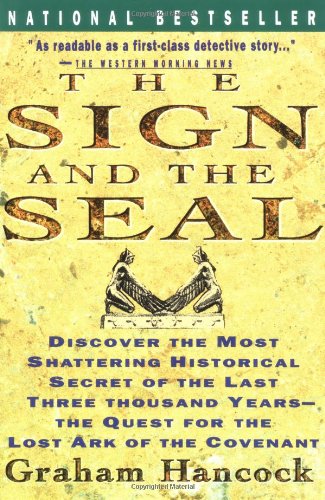 Sign and the Seal: The Quest for the Lost Ark of the Covenant Amazon Price: $17.99 $3.96 Buy Now(price as of Nov 1, 2014)
Very controversial but an exciting "who done it" archeology and history book.

Location of Axum where the Ark of the Covenant Chapel is located.

Get DirectionsAksum, Ethiopia
Next >> Top Things to See and Do in Athens, Greece

Top 13 Things to See and Do in Stunning Santorini

Best Greek Islands to Visit: A Guide to Help You Choose