trufflehunter is a full-time copyeditor by day and an InfoBarrel addict by night. Want to join her in her quest in writing for money? Join InfoBarrel now for free and start getting paid to write about what you love!
InfoBarrel is a writing platform for non-fiction, reference-based, informative content. Opinions expressed by InfoBarrel writers are their own.
InfoBarrel > History > 21st Century

It is no secret that humans do the dumbest things. And it should be no surprise that equally dumb and sometimes strange laws were created to regulate human behavior. Depending on the country, some of these laws were created several hundred years ago. While they make no sense in today’s modern society, some strange old laws existed for a reason.

1.    A sticky situation in Singapore

In Singapore, the sale of chewing gum is prohibited. This law was created in 2004 because people disposed of gum incorrectly by sticking it under places such as chairs or tables. Also, removing stuck chewing gum in public places such as the subway doors and on cars was costly and difficult. No thanks to people sticking their gum on the door sensors of commuter trains!

Strangely, even if you're not allowed to sell chewing gum in Singapore, this country allows its inhabitants to chew it. Just make sure the gum is disposed of in trash cans, or hefty fines may apply. Also, Thailand and the UK have followed suit with this law in order to maintain cleanliness in their cities. Other types of gum, such as nicotine chewing gum that helps smokers quit smoking are available, but you’d need a medical prescription for those.

Established by leader Deng Xiaoping in 1979, China’s one child policy was to limit population growth in the then-communist country. As the communist government condemned birth control and banned imports of contraceptives, this measure is believed by the Chinese government to have helped to ease China’s socioeconomic and environmental problems. Contrary to Western belief, China does not kill second borns. Rather, a huge tax is imposed on any family who chooses to have more than one offspring.

Despite this law, the world’s most populated nation shows no sign of slowing down and is about to get more crowded. According to reports, Chinese authorities are considering lifting their controversial one-child policy by the end of 2015. Currently, couples may be eligible for a second child if both parents are sole children themselves.

3.    Ladies in pants break the law in France

Until 2013, there was a law that forbade women to wear pants in France. Created in 1800, this 200-year old law was originally intended to prevent women from wearing the pantalons fashionable with Parisian rebels during the French revolution. This law required that women needed to have the permission of local authorities if they wanted to "dress like a man".

The law was amended twice: once in 1892 to make exception if the woman is “holding a bicycle handbar” and another time in 1909, for when the woman is “holding the reins of a horse". In January 2013, this law was officially lifted and Parisian ladies could finally catch up with fashion in the 21st century.

In the words of Shakespeare, men’s eyes were made to look. But in New York, an old law prohibits a man from turning around on a city street and looking at a woman “in that way”. This lascivious behaviour from a man to a woman, otherwise known as flirting, could bring about a $25 fine.

If a man breaks this law for the second time, he can be forced to wear horse-blinders when he next goes for a walk.  So boys, flirt at your own peril! This law has worse consequences in Little Rock, Arizona, whereby engaging in playful banter may result in a 30-day jail term. What a good thing there are no similar laws against flirting online.

5. Be hanged for attempting suicide in Ireland

From 1964, the penalty for suicide in Ireland was death by hanging. Apparently, whoever took away the life given to them by their Creator showed disrespect for God and jeopardized their salvation. This must have encouraged the church to treat suicide like a sin. Also, aristocrats viewed suicide as a shameful act, more often recorded among peasants.

But how can a perpetrator of the law be punished, if he’s already dead? How do you enforce a penalty on a corpse? Also, judges eventually realized that the same person could not be considered both murderer and victim, not technically. Since 1993, the act of taking one’s life was no longer a crime.

6. Exam cheaters will be jailed in Bangladesh

While many of us might remember cheating on a school exam or two, this is no joking matter in Bangladesh, where children aged 15 and older could be jailed for cheating on their final examinations.

Bangladesh takes the ‘crime’ of cheating very seriously. Every year, the government takes pains via print and television media every year to forewarn students. While some may view this as a good law and one that should be adopted in other countries, it is a rather heavy penalty to pay while one is still a student. So, what’s the moral of the story? Cheaters never win, but they may go to jail.

7. No more than three sandwiches in Massachusetts

Trying to starve mourners to death? In Massachusetts, USA, it’s not just bad manners to eat more than sandwiches at a wake. Apparently, it’s illegal. This is an old law that was never taken out of the books.

So, why do the Massachusetts authorities regulate the number of sandwiches you eat? Is this simply a law developed out of social courtesies? And what is the relation between wakes and sandwiches? What if you had more than three slices of cake at a funeral? Anyway,  maybe you just shouldn’t attend a wake in Massachusetts if you’re really hungry, unless they serve huge sandwiches. Or just eat something at home before going to a wake.

8. Don’t forget your underwear in Thailand

Every mother knows that clean underwear is essential, but not as much as in Thailand and Bangkok. If you’re travelling to the Land of Smiles, make sure you pack enough underwear to last you for the entire trip.

Leaving the house without wearing underwear is illegal, even if you had other clothes on. And this is not because it’s cold in that country. But how exactly they enforce this law, we will never know. So don’t take chances! Then again, nobody said anything about leaving your house wearing ONLY underwear, or underwear on any other part of your body such as your head.

You’ve probably done this many times: change a light bulb. But strangely enough, in Victoria, Australia, it is against the law to change a light bulb unless you’re a licensed electrician or professional. This law probably originated from the days when having an unlicensed electrician change your house lighting could result in a fire in the neighborhood.

Not just applicable to public buildings, changing the light bulb in your own home would be breaking the law. Having said that, the fine is only $10 or $20, hardly worth worrying about. So, are Australian stores allowed to sell light bulbs to unlicensed people?

Don’t tell Mary Poppins, but it’s illegal to feed pigeons in St Mark’s Square Venice, Italy, or anywhere for that matter! Apparently, pigeons outnumber tourist at about 110,000 in the city square. Officials do not take kindly to their beloved buildings and monuments being covered with pigeon poop, which not only contributes to the decay of these buildings but also poses a potential health risk.

This law was evicted in May 2007, and with it came angry birdseed vendors who were out of their jobs. While previous efforts to control the numbers - nets, spikes and electronic contraptions to deter perching – were mainly unsuccessful, the birdseed hawkers were their most important food supply and had to be cut off. Failure to comply with this law would result with just a warning at first, but the fines could reach up to $600. Now, that ought to deter offenders. 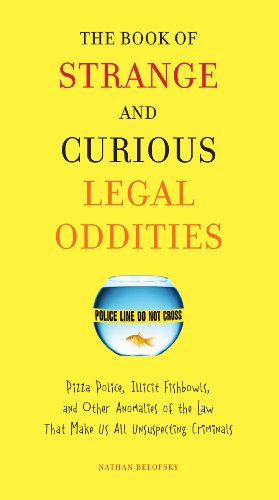 The Book of Strange and Curious Legal Oddities: Pizza Police, Illicit Fishbowls, and Other Anomalies of theLaw That Make Us AllUnsuspecting CriminalsAmazon Price: $13.95 Buy Now(price as of Sep 21, 2013)
Written by a lawyer, all the laws in this book are real. It also shows how some of us may be breaking the law unknowingly. Intellectual and slightly entertaining, I think it would make a good gift.

In the words of Nathan Belofsky, author of the book in my Amazon Product link above, "(some laws) are just plain dumb, the result of accident or mistake, while others are borne of malice, to... taking away our fun." You decide. If only there were a law that everyone must be happy.