1998 is the only year that the United States struck a Kennedy half with a matte proof finish. The total number of coins that where minted to go in the set was 62,000.

A one dollar proof coin depicting Robert Kennedy is alongside his brother in a two coin set struck in silver by the United States mint for collectors.

Originally selling for $59.95 many savvy numismatists stocked away a few sets for sale at a later date. The ones who still have them may want to reconsider selling right now. Availability has not yet taken the turn toward rare but soon it will surpass that to the ultra rare.

Although the majority of these coins will always remain in perfect condition as they are not for circulation and all come in plastic for collectors. There is the fact that many of the two coin sets have been split in half for certification and encapsulated, looking for that coveted MS 70 perfect coin.

What this has done is reduced the amount of original sets in the original packaging to a much lesser amount. This fact along with the relatively new Internet phenomenon, that has everybody and there brother collecting US coins across the globe, a new rarity is on the near horizon.

I have been searching eBay and other auction sites for this coin set and at this time I can find about a half dozen sets that are all going for around $200.00. This is a coin that is less then 20 years old and it has already appreciated by 150 percent.

What this means is that there are only 62,000 complete sets of Kennedy half dollars possible. That makes this the key date and we all know what eventually happens to all key dates. They soar to unobtainable price ranges and become non collectible to most of us.

Pile these up and you'll have a real 401-K plan 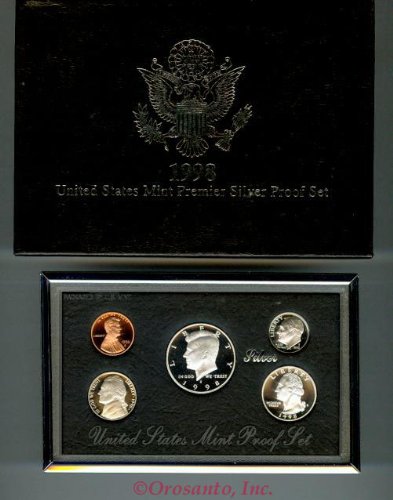 1998 U.S. Mint Premier Silver Proof Set Amazon Price: $33.99 Buy Now(price as of Sep 23, 2015)
Silver is fast becoming a great hedge against looming inflation in these trying times. There is no better way to invest then in brand new government issue silver coins. No worries about inflation with this one it goes up substantially when inflation rises.

King Of The Kennedy's

This is by far the king of the Kennedys. A coin that will very soon be uncollectible in my opinion. A small mintage has sent the price as of this writing to $200.00 for any original example already.

Nowhere left to go but up, both in price and rarity, this coin is now presenting a unique opportunity for the avid coin investor to put away an obsolete United States coin for short term investment and make a substantial return.

This opportunity is also a shout out to collectors who may not have considered the fact that now is probably the final years that this coin will be obtainable and if you are attempting a complete set then you had better get the lead out and grab yours now. Taking your time looking around for the best price could leave you out in the cold.

Uncirculated examples of any coin are graded from MS 60 or mint state 60 to MS 70. A sixty coin will have bag marks from the mint or blemishes in color. There may be a little toning or a spot or two that throw the grade down.

MS 70 Kennedy matte proofs are currently over a thousand dollars and not that many have been certified with this grade. The reason for the decline in sets being sold again, is because many are being broken up looking for that perfect coin. Keeping them together may end up being a smarter move as original sets are going to be what's scarce.

This coin will join its brother soon for rarity. 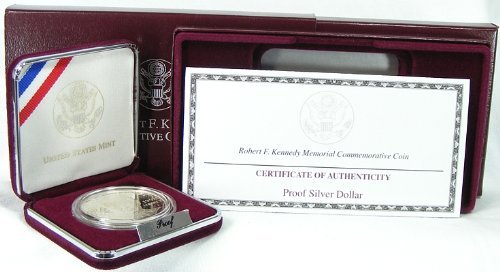 1998 Proof Robert Kennedy Memorial Commemorative Silver Dollar w/Box Amazon Price: Buy Now(price as of Sep 23, 2015)
I've watched the JFK half dollar thats part of the two coin set dissapear from the market. This coin which comes along with that matte proof half dollar is gaining popularity as people put sets back together. The more valuable half dollars were removed from many of the 60,000 sets that were made.

Robert Kennedy adorns this proof dollar to make up the second half of the two coin set.

This coin is worth about 40 dollars as it unfortunately has no other set competing for it's presence, as does the Kennedy half.

I also believe that this coin is another good coin to invest in because it does have the same rarity and it also is being split from it's original packaging in large numbers.

Silver values have risen to record levels and show no sign of retreating soon. This makes another benefit to owning this set, the silver content is always going to be there.

Two beautiful coins. Sent out directly from the United States mint to collectors directly. This is not your average collectible, but a rarity waiting to happen, unfortunately for most, it will not wait too long.