My name is Rose and I am a Canadian freelance writer. I love to tackle human rights issues and anything related to the betterment of society and our planet.  For a sorted directory of my articles: RoseWrites.netboard.me Love to write too? Join me on here on InfoBarrel.
InfoBarrel is a writing platform for non-fiction, reference-based, informative content. Opinions expressed by InfoBarrel writers are their own.
InfoBarrel > Sports > Olympics

Men and women support our athletes...

At the Socki 2014 Winter Olympics, Canada placed an impressive 3rd for the most gold medals victories (10 in total) and 2nd place for the most silver medals (10 as well). Canada brings home 25 medals this year (the 4th most medals won in the final tally).[1]

My favorite moments were when our women's hockey team won the gold medal. It all happened with only 55 seconds left in the game. Marie-Philip Poulin not only tied the game, she scored again (in overtime) and won it for us.
What I love most is the pride our men also share in this win for Canada.
Gary Clement's 2006 Olympic cartoon was posted again in Dave Bidini's National Post article (published February 21st, 2014). Simply put, it shows the men's hockey coach saying to the team, "Play like girls."[2]
And the guys did. They won the gold medal for Canada in men's hockey.
So, who are the best hockey players in the world? Canadian men and women. Bravo! It's okay, take a moment to feel great about it all.
Up next, the video of Marie-Philip Poulin's overtime winning goal (41 seconds):

Marie-Philip Poulin and the winning goal (in OT):

The men secured the gold too...

LandonProduction did an incredible job of detailing the game (I watched nine videos). He embodies all the enthusiasm (with a lead in to my next point).

We believe in you Justin and Jesse

What makes our Canadian athletes great isn't just their dedication to the sport, it's their sense of giving back to the community. And these guys deserve a gold for what they've endured prior to (and during) the Olympic games.

If you watched LandonProduction's report (above) on the men's hockey win, you know he mentioned the heartwrenching crash of our 4-men bobsled team (comprised of Justin Kripps, Jesse Lumsden, Cody Sorensen, and Ben Coakwell). Main point: the guys seemed to be okay. Thankfully, we watched them walk away from the scene.
Addendum: Justin Kripps tweeted, "Cleared to slide today, it will be good to be back out there. [Lumsden] will be with me, [Sorensen and Coakwell] recovering."[3]
They tied their first start time, transitioning through the turns Kripps proved to be a stellar pilot, it was near the end that the bobsled overturned.
Why I love them and our Canadian crowds - we applauded their effort. The team consoled each other. They are brave. What you might not know is how much dedication and sacrifice goes into preparing for the Olympics.
Justin and Jesse put together this hilarious promo video shown next. (I had no idea the costs involved in this sport). For example, one pair of runners cost $10,000; a sled costs up to $80,000. Not to mention the cost of food, supplements, and safety equipment (which we know saves lives and probably did on February 22nd, 2014).
This hilarious commercial was made not only to support their dream of bringing back gold for Canada, but to help out amateur athletes. By raising awareness for their sport (and the costs associated with it) these guys remind corporate Canada to stay involved. My girl wants to try out all kinds of sports now, I think that makes our athletes wonderful role models.

The most sought after Canadian Olympic keepsake... 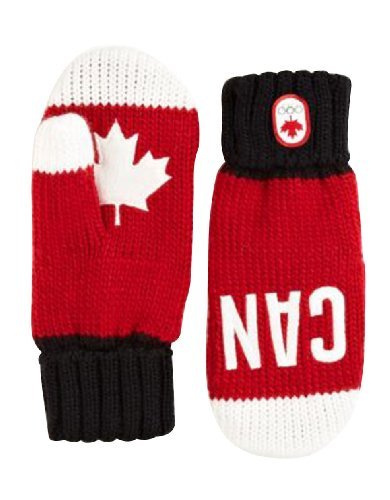 Canada Olympic Collection 2014 Snow Top Red Mittens Small/medium Amazon Price: Buy Now(price as of Aug 4, 2015)
These mitts are fleece-lined and quite warm. The team Canada maple leaf and Olympic rings are neatly embroidered on the wrist. What I like most is the big maple leaf on the palm - you really notice it whenever the wearer waves his or her hands in a crowd. Also available in Large and X-Large (when you click and scroll down). Recommended care: cold water wash in a gentle cycle.
Next >> Steven Bradbury: The Most Amazing Race In Skating History