I've spent most of the past two decades in East Asia, holding lecturing and publishing positions in Hong Kong, Japan and South Korea. Among my favorite places are Taiwan and the Philippines. I'm fascinated by local religions and customs, and enjoy reading about history and how the English language changes and develops. I enjoy writing on InfoBarrel. If you love writing, sign up today.
InfoBarrel is a writing platform for non-fiction, reference-based, informative content. Opinions expressed by InfoBarrel writers are their own.
InfoBarrel > Lifestyle > Politics & Government

Meltdown in May? Looking Ahead to the 2015 UK Election

The United Kingdom's electoral system is a clear and present danger to the country's political health. Because the UK is an important country, having the world's sixth-largest economy, we should all be concerned. I'm not suggesting the UK is likely to collapse into civil war, but the current system through which British voters chose their government may well lead to paralysis right after the 2015 election. The UK is a permanent member of the United Nations' Security Council, so indecision in London will surely impact global efforts to tackle Ebola, the Islamic State, climate change, and other serious issues.

The problem isn't so much the quality of the UK's politicians or its media, both of which seem at least as good if not better than their American or Canadian counterparts. The crux of the matter is the electoral system, which fails to accurately reflect public opinion.

The UK has neither proportional representation (where seats in the legislature are assigned to parties according to the percentage of the vote they obtain across the country) nor STV (single transferable vote; voters list candidates in order of preference, so expressing support for a person or party with no chance of winning doesn't feel like a wasted vote). As with elections to the US Congress and the Canadian House of Common, UK members of the parliament (MPs) get their jobs by winning "first past the post" polls.

To win, a candidate must get more votes than everyone else standing in that constituency (or riding, as electoral divisions are called in my homeland, Canada). If it's a typical two-horse race with a two or three minor-party candidates, that means getting well over 40% of the ballots cast;. But in other places, 30% may be enough. David Cameron, pictured above with his wife after voting in the 2010 election, won a handsome 58.8% of the total vote in his constituency, Witney in Oxfordshire. The candidate who came second got a mere 19.4%.

While the candidate who gets the most votes in a particular constituency is sure to win that seat, there's no such guarantee the national result will be fair. Just as the American electoral college notoriously made George W. Bush president in 2000, despite his winning fewer votes than Al Gore (50,456,002 to 50,999,897), the British system sometimes hands the keys to 10 Downing Street to runner-up.

In the UK, this happened as recently as February 1974, when Labour won 301 seats having received 11,645,616 votes, to the Conservatives' 297 seats and 11,872,180 votes. It's as if every adult in the English Midlands city of Leicester had voted and had their ballots discarded. In the same election, the Liberals got 6,059,519 votes (19.3% of the national total), but a mere 14 seats (just 2.2% of the House of Commons). The Liberals set electoral reform as the price for entering a coalition with the Conservatives. The Conservatives, aware such changes would forever dilute their power, rejected such terms, and Labour leader Harold Wilson, previously prime minister from 1964 to 1970, returned to office.

After the 2010 election produced another "hung parliament" (meaning no single party has a majority), the Liberal Democrats (the party which evolved out of the Liberals in the late 1980s) again demanded changes to the electoral system. To get the Liberal Democrats to join them in a coalition government, the Conservatives agreed to hold a referendum on the question. The Conservatives then campaigned against reform, while the Labour Party allowed its MPs to say whatever they wished on the matter. Due to public anger at the Liberal Democrats (who, many thought, had betrayed their supporters by agreeing to a massive increase in university tuition fees), the electorate turned down this opportunity to replace "first past the post" with the fairer "alternative vote" method. In hindsight, this outcome may look like a shortsighted and costly tantrum. 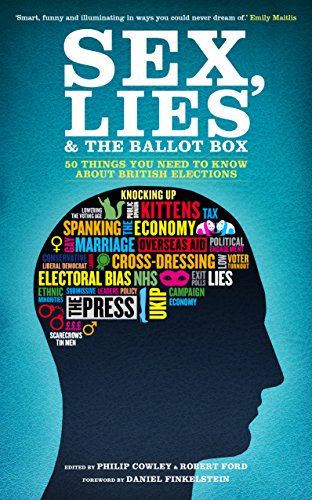 Sex, Lies and the Ballot Box: 50 Things You Need To Know About British Elections Amazon Price: Buy Now(price as of Nov 5, 2014)

Some supporters of "first past the post" say it reduces extremism, because voters who might otherwise be drawn to fringe factions are more likely to cast their ballots in favor of a mainstream party which has a realistic chance of victory. There are two problems with this. The first is that political views which resonant with a meaningful number of citizens, but which aren't represented through normal channels, may end up being expressed on the streets, in the form of unrest or worse. Secondly, the history of Northern Ireland shows moderate parties are vulnerable to extreme factions. The pro-British Democratic Unionist Party (whose homophobic founder, the Rev. Ian Paisley, regarded the Pope as the Antichrist) decimated the mainstream loyalist Official Unionist Party during the 2005 election. A few years earlier, Sinn Fein - the political wing of the IRA terrorist group - had edged out the nationalist but anti-violence Social Democratic and Labour Party (SDLP) as the most popular party among Northern Ireland's Catholic residents.

There can be no doubt that minority parties are gaining ground in the UK. The Green Party got its first MP in 2010. The United Kingdom Independence Party (UKIP) has proved in recent by-elections it can come from almost nowhere to overtake the three major parties. UKIP's opposition to EU membership and large-scale immigration are winning over voters in many parts of England. But because of "first past the post," UKIP is very unlikely to win more than a dozen seats (out of 650) in the next parliament, even if it gets a fifth of the ballots cast.

All previous British parliamentary elections were held on a date decided by the government of the day, except for those rare instances (1979 being the most recent) when the Cabinet lost a vote of no confidence, and wa required by constitutional convention to resign and "go to the country." However, the Fixed-term Parliaments Act 2011 stipulates that the current Parliament will be dissolved on March 30, 2015 and the next election will be held on May 7.

"A week is a long time in politics," Harold Wilson once said, meaning that anything can happen between now and election day. The economy could boom or bust; a scandal could engulf a major politician. But as things look now, the most likely outcome is another hung parliament. Many Liberal Democrat supporters have gone over to Labour. UKIP is picking up support in both Conservative and Labour heartlands.

Credit: Public DomainThe Conservatives have hinted they'll try to rule without a coalition partner if they emerge as the largest party, but lack an overall majority. However, even that may be impossible because UKIP is pulling away so many old-school Conservatives. What's more, the distribution of constituencies favors Labour; this is admitted even by The Guardian, a newspaper which supports left-wing causes. There's a distinct chance of a "second past the post" result of the type outlined above.

Within the Liberal Democrats, many feel working with Labour would be preferable to again sharing power with the Conservatives. So, it seems, in most scenarios will benefit Ed Miliband, the Labour Party's notably unimpressive leader (pictured left). In June 2014, an opinion poll found that  61% of those asked thought Miliband- who served as Secretary of State for Energy and Climate Change between 2008 and 2010 - was doing a bad job. Just 22% were happy with his record. In September 2014, after he was criticized for not mentioning the economy during his keynote speech at the party's annual conference, Miliband admitted forgetting chunks of his presentation.

Can Miliband win a majority in his own right? If not, is he capable of forging a workable coalition with others? Unlike their counterparts in much of Western Europe, British parties have almost no experience of forming coalitions. The Conservative-Liberal Democrat deal in 2010 was made much easier, many say, by the fact the leadership of both parties was dominated by youngish socially-liberal men who attended expensive private schools. In other words, they were speaking the same language from the very start. Miliband won't have this advantage. Is he up to running the economy? And doing the right thing in foreign relations?

The British people, I predict, will soon be living in interesting times.