Thanks for reading!
InfoBarrel is a writing platform for non-fiction, reference-based, informative content. Opinions expressed by InfoBarrel writers are their own.
InfoBarrel > Entertainment > Games

I love to play free online arcade games that I played while growing up in the 80's. I didn't know that I could, until recently. Most of the games listed below you can find and play easily online; a few require you to download some support software to play. The control system takes a little practice before you get the hang of it on some, but what do you expect, you're playing it on a computer. The only thing you have to worry about is spending too much time having fun. Hope you enjoy the list.

1) Pac-Man: A real icon from the 80's, Pac-Man was a hit right from its initial release in Japan. It appeals to men, women, and children which is probably why it is considered synonymous with video games. Pac-Man is one of the easier games of find online, just do a Google search and you'll be chomping on ghosts in no time.

2) Tetris: Another 80's classic game that, if you're not careful, you can play for hours. This is a really great strategy game as you really have to think fast at times to fit those falling blocks into the proper place.

3) Space Invaders: Space Invaders was released in 1978 and is one of the earlier shooting games brought to the public. The goal is to shoot wave after wave of oncoming aliens with your ship. I always hated that you could shoot your own barricades, but otherwise a very addicting game.

4) Donkey Kong: Released in 1981, this is the first time we see Mario the plumber (unofficially). In the game he was called Jumpman (I wonder why).

5) Frogger: Who ever knew crossing the road was so dangerous? I'm glad I'm not a frog. This is another game that came out in 1981 that I spent quite a few quarters on that I can now play online for free. Nice.

6) Mortal Kombat: This game appeals to males for one reason: you get to

kick people's butts. Awesome characters as well, though there is a basic storyline. Released in 1992 by Midway it quickly became surrounded in controversy because of its violence. My favorite characters were Scorpion or Raiden…. MORTAL KOMBAT!!!

7) Kung-Fu Master: A simple, but addicting beat people up to rescue girlfriend game released in 1984. I played it a lot.

8) 1943 The Battle of Midway: This follow up to 1942 was released by Capcom in 1987 and is a vertical scroller shooter game just like its

predecessor. Players pilot a fighter plane during World War II with the goal of attacking the Japanese air fleet that just sank an American aircraft carrier. I always saw this game as a great shooter that I loved to play, and never gave a second thought to Japanese or American named forces. I guess they had to market it someway, though. I hadn't played it in years until I ran across a playable version on the web.

9) Centipede: Brought to you by Atari in 1980 Centipede was a vertical shoot'em up game where you try to destroy the centipede winding its way toward you through a field of mushrooms. I was never very good at this game, but I had a lady friend that was and she would kill me if I didn't include it in this article.

10) Pole Position: This racing video game released by Namco in 1982 used a format where the player is behind and above the vehicle. Somehow I doubt there are many guys who grew up during the 80's that haven't played this game.

11) Ghosts 'n Goblins: This is a 1985 platform game released by Capcom that is hard as heck to defeat and viewed by most as one of the most difficult arcade games ever released. My knight spent quite a bit of time in his underwear.

12) Punch-Out!!: A 1984 boxing game by Nintendo that produced many other successful sequels. I never played it very much, but I had friends who loved it.

13) Galaga: Brought to the Americas by Midway in 1981, Galaga is similar to Space Invaders as you have to shoot insect like aliens as they get closer. Be warned, sometimes a boss will come down and try to suck you into its tractor beam.

14) Double Dragon: A classic beat 'em up released in 1987 where another player can actually join in and help beat up the bad guys. I love the fact that you can disarm an enemy from their weapon and pick it up yourself. Weapons include bats, whips, dynamite sticks, and more.

15) Spy Hunter: Spy Hunter is a popular action driving 1983 arcade game that had some great theme music and allowed you to mix racing style game play with bullets. You play a spy driving an armed to the teeth sports car where you destroy enemy vehicles while trying to protect civilian vehicles.

16) Tron: A 1982 released arcade game that is based on the Walt Disney movie of the same name released the same year. It's divided up into four subgames my favorite being the battle tanks in the maze.

17) Asteroids: This 1979 game by Atari looks so simple by today's standards but is still very fun and addictive. The goal is to destroy asteroids and alien spaceships while not running into them. Everything is made up of basic lines, but this doesn't take away anything from the game play. Pretty easy to find online.

18) Dig Dug: Another 80's game that took many of my quarters Dig Dug gave you the opportunity to blow up your enemies like a balloon until they burst. You could also drop rocks on them, but who doesn't like to see a pooka pop?

19) Karate Champ: Coming out in 1984 Karate Champ is one of the first fighting games and a lot of fun to play against another person. Using two joysticks the player can perform a number of karate moves to degrade your opponent. I used to love it when another person just came up and put in a quarter to challenge me. I was good.

20) Street Fighter II: This sequel came out in 1991 and was a huge hit with fans because the game offered a selection of playable characters to choose from instead of just one. Players battle each other or the game in hand to hand combat in best two out of three matches. Each character had their own distinct fighting style. My favorites were Blanka, Dhalsim, and E. Honda.

21) Contra: Released in 1987 Contra was one of the earlier arcade games that featured two-player simultaneous game play. Players are sent on a mission to destroy a terrorist organization planning to take over the Earth. Be sure to pick a good partner when playing two-player mode as a slow partner can get you killed.

Enjoy your favorite classic arcade games through your iPad! 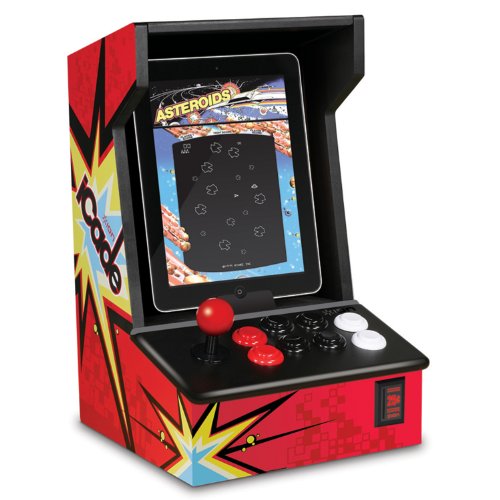