If you are considering the 24 volt four wheelers for purchase, you may want to take a little time to study up on them. These are certainly not the same as a gas powered quad, but they pack a lot more punch than the 6v or 12v units. If you have a youngster just waiting to ride, it would be a good idea to consider the pros and cons of an electric quad this size, so you can make sure it's the right choice for you and your child. This can be a hard decision to make, so let's take a look at some of the things you will need to consider, before you get the 24 volt four wheelers.  These are generally considered safer than cheap kids gas powered atv's. 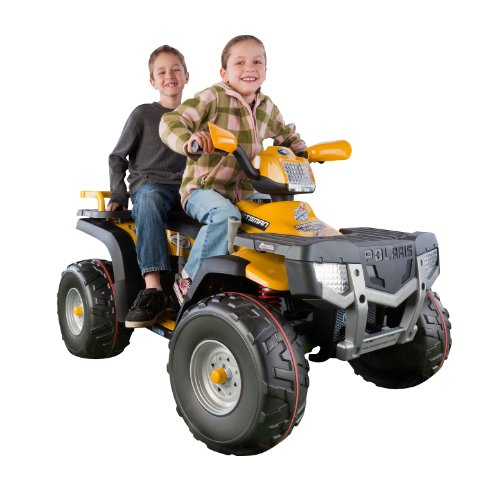 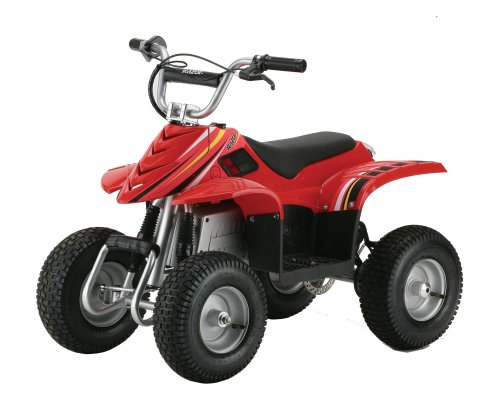 This will be the biggest difference between a 24 volt four wheeler and a 12v or even 6v electric ATV. You will find the Peg Perego Sportsman 800 and Ranger RZR both have plenty of pow

er for an electric version of the adults ATV's, along with the electric Gaucho ride on, and the Jeep model of 24 volt four wheelers. The power will allow your child to drive up hills and on rough terrain, like a yard, instead of just sticking with the flat pavement. While the plastic tires don't allow tons of grip for off road riding, they do much better than you would likely expect. The top speed is not fast compared to a gas model, but is a bit faster than the 6v or 12v models you will generally find at the stores. This can make 24 volt four wheelers more appropriate for bigger kids that just aren't quite ready to go with gas.  If this won't work, consider some other battery operated ride on toys.

Of course, with the increased power and speed comes some danger with the 24 volt four wheelers you may be considering. The electric quad's wheels will continue to spin, so long as the gas pedal is engaged, even after the driver runs into a solid object, like a wall. The same could be true of a 6v electric ATV, but they lack the power to do major damage. While this may not be nearly as big of a deal when the child runs into a wall, it could be a big deal if the child runs into a person with the 24 volt four wheelers. Safety is a concern. It should be noted that although the speed is more with these, they still only top out at about 7 miles per hour.

The cost of Peg Perego 24 volt four wheelers is about $650, about the same price as a Chinese off brand atv, while the RZR model runs about $100 more. This is a substantial jump up from the price you could expect to pay for a 12v quad. It may

or may not be worth it to you, depending on your position. The Gaucho is little less expensive, but will vary quite a bit, depending on where you make your purchase. This is because the Gaucho and Jeep are no longer being made, but are still available here and there for purchase. Keep this in mind when you look at 24 volt four wheelers.

Shipping and handling can really add up on a heavy item. Like the 24 Volt four wheelers. The battery alone is really heavy. For this reason, you will really need to fully consider the cost of shipping and handling if you order online. It can add a lot of extra money to the purchase price of your 24 volt four wheelers. It just doesn't make any sense to pay more than you have to.

You can set the speed at two stages on these 24 volt four wheelers – 3 1/2 or 7 miles per hour for most models. This will allow you have at least some control over the speed your youngster goes on his electric ATV. The 24 volt four wheelers have reverse and a flip up seat for storage. In addition, you can get your 1 year warranty upgraded to a 2 year warranty by taking part in their survey. It's a decent upgrade. NOTE: The battery and charger warranty are separate and only last for 6 months. There is a flag for visibility and the battery powered ATV can handle a rider weighing up to 150 pounds, which is more than most of the other electric quads out there. This makes the 24 volt four wheelers last longer until your child outgrows them.

Buy an extra battery. You will pay about $140 for one, but it will allow your child to always have a fresh battery, so they don't have to quit riding in the middle and wait overnight for the battery to charge back up. Like many other battery powered ATV's, the take several hours to fully charge. This can be really hard on a child, so it may very well be worth the extra money for the spare battery to power your 24 volt four wheeler.

list. You may be able to get a really good deal and save hundreds of dollars on a battery powered quad or ATV. Just be sure you get a good enough deal to cover the cost of a new battery, just in case the old one isn't holding up its charge like it should. This will generally be the first thing to go.

When you buy used, look to make sure the 24 volt four wheelers aren't sun faded. This is a sign that the battery powered ATV has been left outdoors. Rain can damage them and the sun will fade and potentially weaken the plastic. In addition, look for major scuffs or cracks in the plastic. When the quads ram into hard objects, it will jar everything in them, including any electrical wires. This could potentially ruin the 24 volt four wheelers.

While companies like Power Wheels don't make 24 volt four wheelers, people are modifying them. This can be dangerous. In most cases, the electric systems themselves are not changed, just the battery. This could cause a fire or cause your child to get a shock. If you are looking at used 24 volt four wheelers, it's best to stick with one that's fully stock, not modified. Electric quads can be dangerous if they are altered incorrectly. 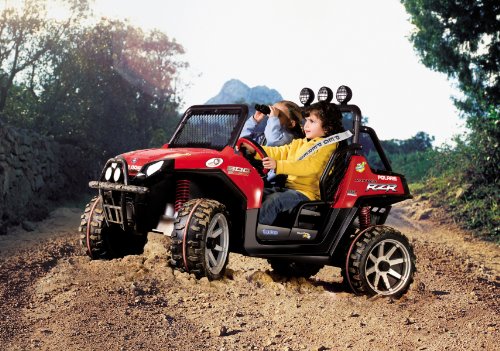