The 3M Company is an American multinational conglomerate corporation based in Maplewood, Minnesota, United States. 3M has worldwide reach and on of the greatest international presences of any multi-industry company. It's operations span more than 60 countries. There are 29 international subsidiary companies with manufacturing operations, 35 international laboratories and distributors and retailers managing sales in nearly every country in the world with 63% of 3M's total revenue comes from outside the United States as of 2009. The company also makes many 3M products available online for purchase.

3M's over 80,000 employees produce more than 55,000 products sold in more than 200 countries.  These products are broken into six business segments:

Innovation is the key to the company's success with up to a third of annual sales coming from new products.

3M trades on the NYSE as MMM.  It is a DOW JONES INDUSTRIAL AVERAGE component and a member of the S&P 500.

The history of innovation that sees mistakes as opportunities started on June 13, 1902. Five men walked into John Dwan's office in Two Harbors Minnesota to sign the incorporation documents for Minnesota Mining and Manufacturing, later renamed 3M Company. They thought they were going to sell a valuable mineral called corundum to eastern manufacturers for grinding wheels.

What they actually had was worthless anorthosite and it made a lousy abrasive.  They failed to make useful sand paper, but rather than give up, they persevered, turning to imported Spanish garnet, and building a good business.

The company's second serious problem came in 1914 with catastrophic product failure. Customer were complaining the garnet was falling off the sand paper. One worker noticed that the minerals left an oily residue when soaked in water.

It was uncovered that the garnet had been shipped with olive oil while travelling from Spain. Rough seas spilled the olive oil into the garnet. The oily garnet would not stick properly to the paper and cloth backings causing product failure.

But 3M couldn't chuck the garnet - it was vital inventory. Instead, they had to find a way to get the oil out. The garnet was too expensive to throw out, so they tried washing and baking the stone to remove  the oil, and it worked.

It took years for 3M to restore its reputation, but 3M's early misadventures taught the company an important lesson: ingenuity and perseverance can overcome even potentially ruinous mistakes.The company started its own lab in the wake of the oiled garnet disaster which was a critical step in the development of a culture of innovation.

A glue that would not stick very well lead to the invention of Post-It Notes and R&D continues to be the key to 3M's growth.

History of the 3M Logo

The 3M logo is the key element of the company's corporate identity. The company has worked hard to develop the logo into a corporate asset that is a symbol for innovative, reliable products and services from a company people can trust.  This information is summarized from 3M corporate site, where the logo images were borrowed from.

Buying a 3M collectible is a great choice for current or former employees of 3M, investors that made a lot of money with 3M or others that use 3M products in their business.

A line of 3M Bookshelf Games produced in the 1960s and 1970s has developed a collector following.  Titles include Phlounder, Ploy, Oh Wah Ree, and High-Bid.  Check eBay and collectible stores for these titles.

3M, along with Ford Motor Company sponsors Greg Biffle and the No. 16 3M Ford Fusion. As a result, there are a number of NASCAR collectibles and clothing that bear the 3M brand. 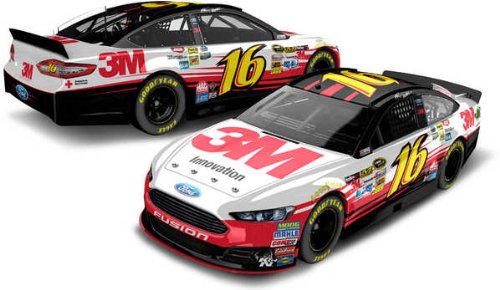 An interesting and unique gift for a 3M employee, supplier, or dedicated customer is a share of 3M stock.  These are easy to order as a gift. They come with annual reports, the right to attend 3M's annual general meeting in St Paul and dividend checks.

As a registered stockholder you can also join 3M's shareholder plan to reinvest dividends and buy additional shares without needing a stock broker.

Other Corporate Collectible Articles of Interest

The Innovative Culture of 3M

Next >> Why Most Bond Funds are Riskier Than You Think