If you are looking for one of the newer properties that have been built in the new Downtown of Las Vegas then you will not find it. The Golden Gate is truly a part of Old Downtown Vegas. The Golden Gate is actually the oldest Hotel Casino that is loaded under the canopy of the Fremont street experience.

The Golden Gate Hotel originally opened in 1906 and was called the Hotel Nevada. The Hotel Nevada was very popular with people who would ride into town on the Railroad. Once Gambling was legalized then the Hotel Nevada became the Sal Sagev. In 1955 the Hotel and Casino was once again renamed to the current name of the Golden Gate. In 2005 the Hotel underwent extensive renovation. Some of the largest Hotels in the World are in Las Vegas but there is no way that the Golden Gate Would ever make that list because there are only 106 rooms at this Hotel.

What makes the Golden Gate cool is that it is home to the Original Shrimp Cocktail. Unlike the other wannabe casinos in Vegas the Golden Gate loads your dish p with a lot of shrimp. Most Casinos in Vegas that sell cheap shrimp cocktail are able to sell it cheaply because they give you more lettuce and sauce then actual shrimp. The Golden Gate will actually give you a lot of shrimp and it is good. It is by far the best cheap shrimp cocktail in Las Vegas. Nothing cooler then eating a Shrimp Cocktail for breakfast after a hard night of partying all night.

The Plaza Hotel and Casino stand where the original Las Vegas train depot was located at. The Plaza Hotel and Casino has been seen in countless movies and as the backdrop to many music videos. The Plaza used to be my favorite place in Vegas to stay until they remodeled the rooms. The Hotel underwent a major remodeling. Yes the remodeling looks great and everything seems brand-new but the prices went up. I preferred it when I could get off-season rates of $20.00 a night with no resort fee Sunday-Thursday. How many times I used to swim in the old pool, even when I was not staying there. Times have changed since the remodeling and all super-rich Asians that used to play Baccarat for $100,000  a hand have since moved on to play in Macau.

Even though times have changed drastically the Plaza Hotel and Casino is still one of the top 5 coolest Hotels Downtown because it is at the head of the Fremont Street Experience and not matter how drunk you get, you can always find your way back to the Plaza!

The Four Queens makes the list of one of the top 5 coolest Hotels in Downtown Las Vegas because of the location. The Four Queens is located in the center of the Fremont Street Experience. If you have ever stayed for a few days or more before in the Downtown area and spent a lot of time wandering around under the Canopy then you know how cool the central location of this Hotel Casino is, especially if you were staggering a lot from all of the alcohol.

The Four Queens is loaded with history but it also is a cool property because it does not charge the scandalous resort fee that a lot of other Vegas Hotels charge.

The Golden Nugget makes the list of the 5 coolest Old Downtown Las Vegas Properties because it is an old property, yet brand-new. This property has undergone numerous renovations and remodels and continues to be one of the top-rated hotels to stay and play at in all of Las Vegas. The Golden Nugget has helped to attract more visitors who stay at cheaper properties downtown but will head over to the “G Nugget” for some gaming action.

No resort fees and a truly awesome place to stay makes for just a couple of great reasons why the El Cortez is the coolest hotel casino to stay at in Downtown Las Vegas.  The El Cortez gets a lot of locals who come and play here because they want to avoid the huge Mega-resorts with their low paying games and the asinine tourists.

Jackie Gaughan bought the Casino in 1966 and kept it until 2009 when he finally sold it. Today Jackie Gaughan is 92 years old but he still lives at the El Cortez and you can often see him playing poker downstairs. If you have ever played Poker or chatted with Jackie Gaughan then you know why the El Cortez is the coolest Casino and Hotel in Downtown Las Vegas. 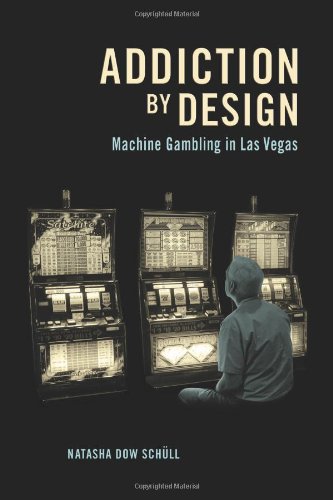 Addiction by Design: Machine Gambling in Las Vegas Amazon Price: $51.31 Buy Now(price as of May 11, 2015)
Next >> A Punishing Hike to Mt. Ypsilon in Rocky Mountain National Park