It’s no secret that politicians get a bad rap in America. It can be a thankless job sometimes, governing people in the hot white glare of the spotlight; having your every decision scrutinized and second-guessed; knowing that the fiscal or civil stability of your jurisdiction hangs in the balance. It takes a special kind of leader to shoulder this kind of responsibility. Some rise to the occasion and have buildings named after them. Others become punch lines in late night TV monologues.

So while the nation turns its attention to honoring Presidents, I’d like to take a minute to focus on a few mayors. In the past 50 years, these leaders have been considered some of the most ineffective to ever hold the office. Their tenures have included everything from bad decision making, to bribery, to all out mob hits. Let’s take a look at the five worst American mayors in past half-century.

“When the burdens of the presidency seem unusually heavy, I always remind myself it could be worse. I could be a mayor.” – Lyndon B. Johnson

In 1979 Mayor Byrne became the Windy City’s first female mayor. Her frequent bouts with the press and penchant for firing back emotionally drew much attention, and she eventually made an enemy of the newspapers, especially the Chicago Tribune. Her time as mayor was marked by fiscal crisis and a series of strikes, including workers’ strikes, teachers’ strikes, and firemen strikes.

There also were several allegations that some of her decisions were influenced by the mob. She inexplicably put a halt on police crackdowns on organized crime and reportedly used her influence to have potentially troublesome police officers removed from their jobs, although this has never been confirmed.

One of her biggest missteps was in her handling of the Chicago public housing situation. With the city becoming increasingly divided by race and an increase in violence, the not-so-media-friendly Mayor Byrne resorted to a bunch of PR tricks that blew up in her face.

The mayor staged an Easter celebration outside the Cabrini-Green housing projects on the north side. These projects had come to symbolize the crime and racial tension that existed in the city. The festival, complete with a carousel and merry-go-round, was considered a mockery by the predominantly African American neighborhood. This soon resulted in some physical confrontations between protesters and police and only served to deepen the racial divide.

Compounding this fiasco, Mayor Byrne and her husband decided to move into one of the units to show their support to the community. Three weeks later they moved out.

After former mayor William Green inherited the city from Frank Rizzo (also on our list), he managed to drastically reduce Philadelphia’s deficit through a series of tough and unpopular measures. Mayor Goode managed to undo this within his first few years in office, and by the end of his term the city was a month away from bankruptcy. He increased wage taxes to 4.96%, a record high at the time. To be fair, many of his programs were never able to gain any traction due to an unaccommodating city council.

The biggest setback during Goode’s time in office also happened to be one he inherited indirectly from Rizzo. In 1985, a black liberation group called MOVE barricaded themselves in their West Philadelphia homes when police attempted to forcibly remove them. Led by John Africa (all of the members adopted the surname “Africa”), members were known to refuse access to city workers into their neighborhoods. A standoff ensued during which police and MOVE members engaged in a shootout which dragged on for over an hour.

Feeling the pressure to bring a close to the situation, Mayor Goode gave the green light to an operation which involved dropping a bomb from a helicopter onto one of the houses. Missing its mark, the resulting explosion and fire from the bomb consumed four city blocks, killing 11 people, 5 of which were children. 60 of the homes that burned down were occupied by citizens with no affiliation to MOVE.

Although Goode was found to be exempt of any wrongdoing, Ramona Africa later sued the city and was awarded 1.5 million dollars.

Although he never dropped any bombs on his city, Mayor Yorty was responsible for many other problems during his time in office. Elected as a Democrat, Yorty frequently went against his party in support of Richard Nixon. This had less to do with voting his mind and almost everything to do with serving his own future self-interests.

However, this strategy often backfired, as not only did Nixon lose horribly to Kennedy in the 1960 Presidential election, but Yorty’s later non-endorsement of fellow Democrat Hubert Humphrey to gain favor with his opponent (again Nixon) bore no fruit when Nixon reneged on his promise to give him a cabinet post.

Yorty did not support the Civil Rights Movement and was opposed to feminism and desegregation, although on paper he kept up appearances by having a female deputy mayor and a racially integrated staff. His refusal to cooperate with minority communities contributed to the Watts Riots of 1965, resulting in 34 deaths, over 1000 injuries, and $40 million in damages. Throughout his time in office and afterwards, Mayor Yorty refused to take any responsibility for these events.

In 1967 Yorty was connected to a harbor commission scandal in which four city commissioners were convicted of bribery and another was found dead at the L.A. harbor. All of these officials happened to be Yorty appointees.

A shameless self-promoter, Mayor Yorty was frequently on entertainment television, including regular appearances on The Tonight Show (banjo in tow) and eventually hosting his own show called The Sam Yorty Show in 1967. As the burdens of office began to weigh heavy on his mind in his second term, Yorty would seek to escape by traveling and leaving the affairs of the city to be run by his staff. Nicknamed “Travel’n Sam,” Yorty spent almost 40% of his last term away from Los Angeles.

A 1997 survey at University of Illinois rated him 3rd worst U.S. mayor of all time.

When it comes to mayors of major American cities, you’d be hard-pressed to find a more polarizing figure than Frank Rizzo. A former police commissioner, Rizzo was known for his uncompromising attitude and intimidating, almost bullying personality. As commissioner, he frequently fought with the mayor, and once he became mayor, he made threats toward members involved in any kind anti-police movements. His followers were known as “Rizzocrats,” so named for their almost lemming-like support of his policies.

In the racially tumultuous times of 1970’s Philadelphia, Rizzo took a particularly hard stance against the Black Panthers. During a raid against the organization’s headquarters on Wallace and Columbia Streets in 1970, he had them strip searched in front of news cameras which angered community leaders and the NAACP.

The stage for the aforementioned 1985 MOVE conflict was actually set in 1978 when Mayor Rizzo ordered MOVE members to leave their compound after complaints of disturbing the peace and foul smelling compost heaps in their yard. When they refused to leave, police forcibly removed them, during which police were caught on camera beating MOVE member Dilbert Africa while surrendering. Rizzo then ordered the compound burned to the ground.

In 1973, city Democratic Party Chairman Peter Camiel accused Rizzo of bribing him with a job on his staff in exchange for the ability to appoint members to the office of District Attorney and City Comptroller. Rizzo vehemently denied the allegations and challenged Camiel to a lie detector test which Camiel passed and Rizzo failed. Critics point to this event as most detrimental to his future political aspirations, as Rizzo was later unable to secure any significant office up until his death in 1991, the year in which ironically he won the Republican Primary.

Many of the misadventures of Kwame Kilpatrick read like a character summary of a B-rated Hollywood bad guy. Voted one of the worst mayors of all-time in 2005 by Time magazine, his list of offenses include theft, tax evasion, bribery, fraud, racketeering, perjury, obstruction of justice, parole violation, and connection to murder.

During his first term, Mayor Kilpatrick used city funds for personal luxuries including a car, spa treatments, expensive dining, and wine purchases totaling $210,000. It was later discovered that Kilpatrick was involved in an elaborate criminal enterprise with his partner Bobby Furguson in which together they received over $76 million in contracts through extortion. Mayor Kilpatrick used his office to direct $127 million to Furguson’s company, Furguson Enterprises.

Kilpatrick was also accused of indirectly funneling state grant money to his wife and appointing family and friends to highly coveted city positions. When existing positions were not available, he created fake ones.

In 2002 Kilpatrick reportedly held a party at the Manoogian Mansion, the official residence of the Mayor of Detroit. There were several strippers in attendance, and when Kilpatrick’s wife came home and discovered the party she allegedly attacked some of them.  Several months later in 2003, one of the strippers in attendance named Tamara Green (nicknamed “Strawberry”) was shot multiple times and murdered while sitting in her car.

Ballistics showed that the gun used matched the type carried by Detroit police officers. Many believe that she was killed in order to prevent her testimony against the mayor in the Manoogian party. Alvin Bowman, the detective assigned to investigate the murder, was later taken off the case and transferred out of the division.

Other public dramas involving Kilpatrick included bribery for sewage sludge contracts (an endeavor he conducted with his father, Bernard Kilpatrick), a slander lawsuit, and a whistle-blower lawsuit filed by the mayor’s bodyguard and Deputy Police Chief Gary Brown for their unjust termination following investigations into the mayor’s personal affairs.

In 2013, five years after being forced to resign from office, Mayor Kilpatrick was convicted on 24 charges and sentenced to 28 years in prison, the longest sentence for public corruption in U.S. history. He is due to be released on August 1, 2037.

If you feel like there are others that should have made this list, or least deserve honorable mention, please feel free to leave a comment. We welcome all points of view.

A Film on the MOVE Conflict 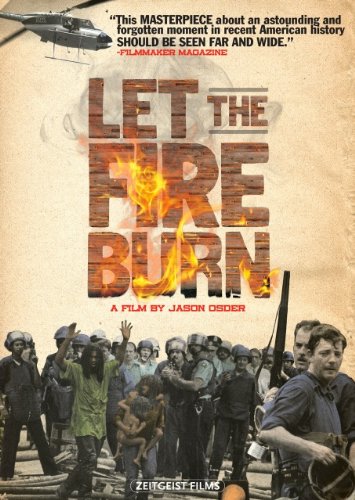