As well as being an avid writer, I am also an enthusiastic gamer, anime fan, movie buff, and love of all things strange. Being as I live with a boyfriend, I am also particularly knowledgeable about cleaning and cooking. You can join me in my adventure of writing for money here at Infobarrel. Sign Up today! Also, I wrote a book! Check out The Guild today!
InfoBarrel is a writing platform for non-fiction, reference-based, informative content. Opinions expressed by InfoBarrel writers are their own.
InfoBarrel > Lifestyle > Food & Drink > Cooking & Mixology > Beverages

A party drinker can only play Kings so many times before they need a new games. Nothing spells more fun than alcohol and a touch of competition. However, these games often can get a bit dangerous. I hereby renounce my responsibility for whatever harm you cause to yourself or to your friends while playing the following games.

Dangerous most of them are, but lacking in fun? Never. You don't need to be a Frat boy to enjoy these games either, however some of them require some space and maybe even a few random materials, so make sure you have those things before starting. however, feel free to add your own bit of creativity to these classic ideas, I would love to hear those stories.

This is a classic game that is not often played because of one valid argument. If we both play this, who will tape the beer to our hands? If you do have someone to tape you up, Edward 40hands is played by taping 40 ounce bottles of malt liquor to your hands and drinking it. Sure, that doesn't sound so interesting. While also limiting you ability to high five and operate a door knob, the challenge with this game comes when you have to go to the bathroom. You are faced with two options when this urge strikes.

Drink all the beer, or pour the remaining beer over your head in defeat and gnaw off the mass of duct tape attached to every hair on your hand. A lot of accidents can happen with two big bottles taped to your hand, peeing yourself is probably the most frequent though. You can also play Amy Winehands, with wine bottles if malt liquor is not your thing.

This is a relatively new game, based on the hit board game BattleShip. This isn't exactly a dangerous drinking game, but it merits mentioning because it is very fun. If only BattleShip was as much fun, I would have played it more.

The premise of BattleShots is pretty much what you would expect. Call out a coordinate and if they have a glass there, they take a shot. You can make a board out of old pizza boxes or you can buy the official board if you want to get fancy about it. 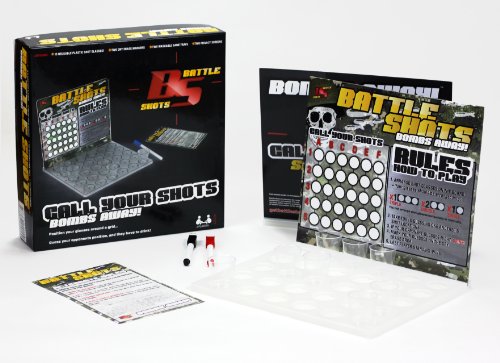 Get ready for a night of slurred speech and stupid spells that either turn more perverted or more like swear words as the night goes on. The wisest wizard is a game played with canned beer. As you finish beers, you tape new beers on top of the empty cans with duct tape. It gets more challenging as your wizard staff grows and your try to drink from it. However, at any time, another player can scream "You Shall Not Pass!!" and you must smash your staves together until one breaks.

There is usually a rule that the person has to drink a beer for every can that broke from his staff. You can choose to use that rule or not.

If you are looking for a way to prove your are a superior drunk AND a superior athlete, this is the game for you. It is a team event so you will need to round up enough friends for two teams. You will also need two bicycles.

The aim of this athletic event is for the first person to chug as much Franzia boxed wine as they can and them ride a lap on a bicycle. This lap can be around the block or through an obstacle course. While the first rides, the second person does the same thing. Your goal is to finish your wine and laps before the other can. When you win, if you haven't fallen and broken an arm or something, you can brag among your peers for being able to navigate a bicycle while tanked!

If you have enough friends to play tour de Franzia, you have enough to play this. The Great American Challenge generously shows off American drunkenness and stupidity. This event involves teams of four in a great triathlon of sorts. First your team must conquer a 30 pack of beer, then you must finish off a fifth of some hard liquor (some circles replace this with some illegal drug, but since illegal drugs are illegal, let's not), after than your team must conquer two large pizzas. Finally, your drunken and fat team bust complete a 100 piece jigsaw puzzle before midnight. You can make a short time limit to increase the challenge. When you win, bask in your glory and the thought of a terrible morning the next day!

This game requires some boxes of wine and one important thing--One of those rotating clothes lines. Place the bags from inside the boxed win onto the clothes line, which takes some doing and a whole bunch of duct tape and have your friends stand in front of each of the bags.

Spin the rotating clothes line and each player must drink from the bag that lands in front of them. Keep spinning until all the bags are empty. This game is especially hard to finish, so good luck. If you want to make the game interesting, change some of the contents of the bag to water or if you are a horrible person, hard liquor.

This is the singularly most dangerous game on the list. It is bad for your skull and for your fingers. For this, you need a stump, a hammer, and some nails. The idea is that you must throw the hammer in the air, it must spin once before you catch it, then you slam it down on a nail. If you hit your friends nail, they drink, if you miss, you drink. If you should happen to hit your own nail, it is time for you to god to bed.

The game traditionally recommends your friends hold the nails in place, but that it a recipe for some broken finger, so it is best to avoid. Also, try not to hit your head when tossing the hammer. As you get drunker, the easier that tends to happen.

Make a Fake Fried, Boiled or Poached Egg in a jiffy