I am a retired teacher of English as a second language. I teach on line via Skype, and write on-line articles which reflect my love of travel, language, literature, history and culture. I love writing for InfoBarrel. Why not join me by signing up here: http://www.infobarrel.com/signup.php
InfoBarrel is a writing platform for non-fiction, reference-based, informative content. Opinions expressed by InfoBarrel writers are their own.
InfoBarrel > Home & Garden > Renovations & Repair

When my husband and I were newlyweds, our first toehold in the property market was a disastrous "fixer upper" which should probably have been bulldozed.

One major challenge was the living room.  The walls were covered with ancient wallpaper disguised with sickly yellow paint; all of them, that is, except for where the previous owner had painted around a heavy china cabinet. Where the cabinet had stood, there was now a faded patch of pink and blue flowers.

I was tempted to re-paint, but there were places where the wallpaper was coming away from the wall so a coat of paint probably would not have been much of an improvement. It would look so much better, I decided, if I re-wallpapered.

My limited knowledge of interior decorating came from memories of home. I remembered that when I was a child my parents soaked old paper with hot water and then scraped it off with a putty knife. This worked like a charm with the unpainted patch in my front room, but the paint-covered paper in the rest of the room was another story.

What I did not know at the time is that there are two factors to take into account when stripping wallpaper.

The first is the wallpaper itself.  The easiest paper to remove is the newer dry strippable kind.  If this is what you are dealing with you should be able to lift a corner of a sheet and then peel it off slowly. If the top layer peels off leaving a backing behind on the wall, you have peelable paper.  In this case, remove the top layer and examine the backing.  If it is completely intact, no other wall preparation is needed  However, if it is damaged in any way, you will need to remove it by soaking it with hot soapy water

But, naturally, my project was not that easy.

If the paper is coated with vinyl, foil or paint, you have to find a way to get the water to penetrate. Also, if the surface was not properly sealed before the paper was hung, the paper will cling to the wall like Spandex.

I was dealing with a triple threat: non-strippable paper which had been applied to an unsealed surface and ten painted over. The first thing I tried was scoring the paper with a putty knife and then re-soaking it.  My husband also got into the act and attacked the walls with abandon. All we seemed to accomplish was the creation of a pattern of deep gouges in the wall.

We did not know it at the time, but there are actually nifty tools which are designed to score  paper without damaging the walls.

This Cheap Little Tool Would Have Things So Much Easier

But no matter. Our efforts were a complete failure. After painstakingly removing small scraps of paper one square inch at a time, the only progress we had made was to create a vast network of gouges with the putty knife.

Obviously we needed a better solution than the gouge, soak and scrape method, so we tried steaming. Not having a wallpaper steamer, I tried using a kettle, but not only was it was dangerously hot but it also turned itself off every time the water came to a really good boil. In the end I found the perfect solution in the form of my infant son's vaporizer.

Of course, an actual wallpaper steamer might have worked so much better. 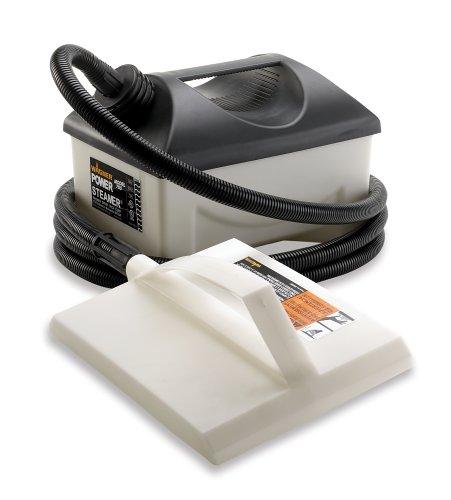 During the interminable stripping process, I  found that the second important factor in removing wallpaper is the type of wall surface underneath. When my parents wallpapered they were working with plaster walls. Plaster is a hard substance which you can scrape or steam it with impunity.

We, however, were dealing with drywall or wallboard, which is the most common modern material for interior walls.  As I found out, drywall gouges very easily so you need to scrape it with care. In addition, it can be damaged by steaming because it is composed of gypsum sandwiched between layers of paper. Although using steam could have been a real problem, I was lucky. Once all the wallpaper was gone and the walls had dried out there was no sign of water damage.

This stripping marathon was only the first step in the crucial process of wall preparation. The next step was to make sure that the walls were clean and smooth.

After I washed the walls with warm, soapy water, I began repairing spatula scars with patching compound. As I smoothed the compound with the spatula that had caused the damage in the first place, I cursed under my breath that most people would only have to fill a few easily filled nail holes.

Next, I checked to see if there were any lumps or rough spots. A smooth wall is important because any unevenness in the wall underneath creates unattractive bumps in the new wall covering.  I smoothed everything with medium sandpaper and then wiped the walls with a damp sponge to remove the sanding dust.

Once all this hard work was over, the final step in wall preparation was to apply size. This is a paste which comes as a white powder that you mix with water. Sizing seals the wall surface and increases wallpaper adhesion and “slip,” which allows you to easily slide paper into place and match patterns.  In addition, it makes the wallpaper easy to remove the next time you redecorate.  Applying size is fast and easy. You simply paint it on the walls using a large paint brush or roller, and allow it to dry.

Watch to See How Easy Wall Preparation Should Be

Of course, real life is never that easy!

When I chose the wallpaper for my first project I chose a small pattern which was easy to match. Other easy-to-match designs include abstract patterns and vertical stripes. Large patterns such as the one in the picture below are more difficult to match and may result in a lot of wastage.

It is important to buy the right amount of paper for your project by calculating the square footage of the area you are covering minus doors and windows. You also have to allow extra paper for pattern matching.

Equipment you need includes a wallpaper tray, a sponge, a water bucket and a pair of scissors and/or a utility knife or box cutter.

Now for the exciting part - hanging your paper.

To measure the first piece, lay a roll of paper on the floor against the wall. Lift the end of the roll up to the corner where the wall joins the ceiling and then raise it another inch. Roll your measured length back down. Get a pair of scissors and use the blade back to score gently across the bottom edge into the join between the wall and the floor or across the top of the baseboard, and then cut the paper an inch beyond the score line.

Your paper, which is two inches longer than you actually need, is now ready to be hung.

When my parents wallpapered, pasting was quite a process.  My father removed a door from its hinges and placed it across a couple of chairs to use as a work surface. He laid the paper across his makeshift workbench, slapped on paste with a giant brush, folded the paper into a concertina so as not to get paste on the front, and carried it over to the wall. Then, starting at the top of the wall, Mum carefully unfolded the paper as Dad sponged it into place.

How the Experts Do It

Pre-pasted paper makes this part of the job so much easier.

Place a wallpaper tray against the foot of the wall and fill it with water. Roll your cut piece of wallpaper inside out, making sure it is oriented the right way up, and place it in the tray to soak for about a minute. Grasp the leading edge of the paper, slowly lift it out of the water, and lay the top edge against the ceiling, about an inch from the wall. Press the top inch of the paper against the ceiling, allowing the rest of the piece to "hang" naturally. Use a wet sponge to press the wallpaper into the join between the ceiling. Then rub the paper outwards from the center with a sponge to remove air bubbles and press the paper to the wall, gradually working down from top to bottom.

One way to trim the paper is to use the back of your scissors to score a line against the ceiling join, pull the top of the paper away from the wall and cut along he score line. Use your sponge to stick the paper back in place. You could also use a utility knife to trim the paper in place. Although this looks quite easy I have never tried this method.

Trim the bottom edge in the same way.

Before measuring and cutting the second piece, pull the roll up and lay it on the wall against the first piece. Examine the pattern and look for a match. When you reach the top of the wall, keep unrolling the paper until a pattern match comes together and cut your paper to length, again allowing an extra inch at each end.

After moistening the paper, place it on the wall as before, leaving a slight space between the two strips, and slide it into place against the first piece. The video below shows you how.

Matching Paper on a Well-Sized Wall

Notice how the second piece slips smoothly into the first

Continue in this way around the room.

For help on how to deal with corners, windows, doors and switch plates, watch the video below.

How the Experts Do It

The hard work paid off and I was really happy with the final results. I have wallpapered  a few more rooms since then. Rather than whole rooms, I have mostly done single feature walls which, believe me, are much easier.

At the bottom of this article are a couple of photos of my most recent project. This was my first effort at papering a whole room since my first attempt all those years ago. I chose a subtle blue pattern which had a short pattern repeat and was easy to match. Because the walls were undamaged and covered with nothing but paint, wall preparation was a snap.

About how I broke a china cabinet full of wine glasses in the process - well, that's another story.

Next >> How Much Does it Cost to Finish a Basement?