Here's a link to an ebook I wrote It's all about my 10 years as a street cop on The Gold Coast in Queensland Australia. Feel free to get yourself a free sample! http://bit.ly/1qKs4YF
InfoBarrel is a writing platform for non-fiction, reference-based, informative content. Opinions expressed by InfoBarrel writers are their own.
InfoBarrel > Entertainment > Music

A Gangnam Style Christmas? The kids are going KPOP Crazy!

Gangnam Style. Who, or What is it?

Even middle aged codgers like me have seen and heard thisÂ

Credit: dragoartstrange phrase, â€œGangnam Styleâ€ bandied about on the airwaves, at the water cooler and even on mainstream news broadcasts lately. So like it, loathe it or lean towards being decidedly indifferent, letâ€™s see what itâ€™s all about.

Gangnam Style is actually the name of a single recorded pop song,(a â€˜45â€™ as we fossils would call it), sung by a South Korean Pop Sensation, simply known as Psy. This genre of music is known by the kids as KPOP, short for Korean pop music. At the time of writing in early October 2012, it has gone viral on social media, utube and the like. However Psy actually released it back in mid July this year, so not quite the overnight sensation that some breathless commentators would have you believe.

But it does not stop atÂ the lyrics or melody of the song. Oh no, Gangnam Style has a dance and fashion style of its own. If you havenâ€™t already watched it, join one of the over three million others and counting and have a peek at it on utube.com. To me itâ€™s a polarizing experience; you either love it or loathe it!

And as for the accessories? Well there isÂ

Credit: amazon.comGangnam Style SunglassesÂ in that distinctive cheeky design, and well the list just goes on and on. Yep I can see this being the top Christmas stocking filler for 2012, and this dad certainly knows what the kids will be craving this festive season! Shop till we drop, but at least we know what will be a hit â€“ ANYTHING Gangnam.

So how did this Mr Psy come up with this name Gangnam? Well it turns out that it is a hip and trendy presinct of South Koreaâ€™s capital city, Seoul.Â

Credit: thenewstribePsy describes it as a north Asian version of Beverly Hills California. Although Psy claims not to live in Gangnam, he wrote the song to suit the neighborhood. It seems that the plot, although familiar, is a step forward for traditional Asian cultural norms. It centers around a young female who aspires to be the perfect girlfriend. A lass, Hyuna, who knows when to show her wild side, and when to be at her most refined. A true Asian mistress for Psy, who pops in and out of the video clip several times.

Most of the music video is shot on location around the Gangnam district, and the viewer is left to watch Psy and friend, Hyuna, doing everything from cavorting in a hot spa, to a spot of outdoor yoga to several odd looking horse dances that just add to the WHAT factor.

And just to round off, it seems that musician and performer Psy isnâ€™t all that typical with matters legal either. According to the respected Guardian newspaper, he has officially waived his copyright to the video. Other commentators are more of the opinion that, whilst still officially having all rights to the product, our Psy has simply not bothered to enforce them. Perhaps this explains the abundance of parody and mimic performances that have sprung up worldwide. Well good on you Psy, after all they do say that imitation is the sincerest form of flattery.

No stress now, ok? Just fill those stockings with anything Gangnam Style and the kids will luv ya! 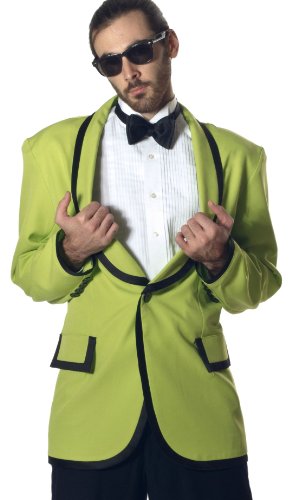 Gangnam Style Tuxedo Jacket, Green, Large Amazon Price: $139.99 Buy Now(price as of Oct 10, 2015)
Next >> Learn to Love Classical Music. Find Out What Amazing Songs You May Have Been Missing!