A Glimpse at the Diversity of the Chicken World

A Chicken For Every Purpose

The scientific name for the chicken is Gallus gallus domesticus. It is a subspecies of the Red Junglefowl. The chicken is one of the most common domestic animals in the world.

Chickens provide eggs and meat. Huge numbers of chickens are raised for these purposes. Many breeds have been developed specifically for egg or meat production. The Isa Brown, Plymouth Rock and Leghorn are all excellent layers of high-quality eggs while the Cornish is a meat bird. Dual purpose breeds which provide a reasonable number of eggs and an acceptable carcass for the table include the Brahma, Rhode Island Red and Australorp.

Some, such as the Cochin, have soft down and feathers which can be used for filling items such as pillows. There is also huge interest in breeding chickens for show purposes and some chickens are kept purely for their ornamental appeal.

Much intensive research has gone into modifying chickens for specific purposes and meat chickens now reach a suitable killing weight at just six weeks of age. Free range or organic birds destined for the table have about 14 weeks of life. Those breeds developed specifically to lay as many eggs as possible in a year, may produce 300 eggs per annum. However such a rate cannot be kept up for long and commercial egg-layers are culled and processed for various food products when their optimum egg-laying days are over.

Roosters or cocks are generally the more handsome of the sexes with the cocks of some breeds having long flowing tails and shiny feathers on the neck and back. The hen is often but not always similar in colour but not nearly as colourful and bright. If the plumage is very similar in both sexes there is usually a difference in the size and/or colour of the comb and the presence of spurs on the legs of males of some breeds. Some breeds are so colourful they are kept almost solely for exhibition purposes although no doubt the eggs are eaten and possibly so are the culls! Breeders continually strive for new and exotic colours and markings. Some of the attractive breeds regarded as 'ornamental' are the Cochin, Cubalaya, Sebright and Silkie.

Chickens have a fleshy protuberance on the top of their heads called a comb. They also have wattles, pieces of flesh which hang from under the chin. Combs come in a range of shapes apart from the common upright single comb seen in most standardised drawings and illustrations of fowl.

Chickens have a unique cooling system whereby their blood circulates through the combs and wattles. As the blood is so close to the surface in these appendages, it cools off before being pumped back into the interior of the body.

Some breeds fly better than others but none 'fly' for extended distances. Heavy breeds like the Brahmas are no trouble to keep enclosed as they are too heavy to fly much at all. Feathers can be close and fluffy or hard and shiny. Some breeds are clean-legged while others have feathered legs.

Chickens like company and establish a 'pecking order' whereby the dominant bird gets first choice of everything and the others submit. Anything that upsets this hierarchy, such as introducing new birds, will see a new round of disputes and fighting until a new order is established. Young birds can have an especially tough time if introduced into a new flock. They will need plenty of room and cover so they can get away from their tormentors.

Hens use communal nests for their eggs as a general rule and will happily move in with another hen to lay her egg. Hens can become possessive over 'their' nest and will try to squash in even when there is no room.

Eggs may be a variety of colours depending on the hen and the breed. Over the centuries fashions have changed with white, brown or in between being considered 'better' at one time or another. The Welsummer lays a dark brown egg as does the Maran. The Lamonalays a white egg and the Jersey Giant a light brown egg. 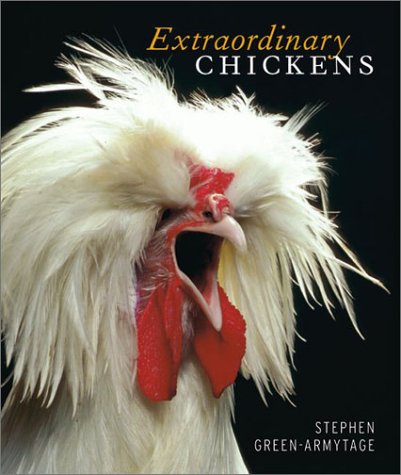 Extraordinary ChickensAmazon Price: $14.95 $7.48 Buy Now(price as of Jul 19, 2013)
Learn more about the strange and extraordinary breeds that frequent the world of the chicken.

Before the intervention of selective breeding, hens laid a clutch of eggs (usually around a dozen eggs) then became 'broody', ceasing to lay but incubating her clutch of eggs. While broody, she will protect her eggs by pecking at intruders. She will turn the eggs regularly and rarely leave the nest until the chicks are hatched. The incubation period is around 21 days.

While a hen is broody, she is not productive so broodiness was bred out of some varieties in an effort to produce birds that would continue to lay throughout the year. Some utility breeds or general purpose breeds go broody more easily than modern egg-laying breeds.

The Silkie, Cochin and Cornish will incubate just about any eggs and patiently sit until the chicks are hatched. Breeders are forever trying to 'improve on' or alter the available varieties or colours and some breeds now come in a great range of colour variations with markings which must follow the Standard of Perfection if they are to do well in the show ring. Many breeds have a standard size and a bantam size. Bantams are miniature versions of a breed. A diminuative bantam is one which has a large counterpart whereas a true bantam does not have a 'big brother' of the same breed. The Serama, Japanese, Belgian and Pekin are some breeds which only come in bantam size while the Welsummer, Barnevelder, New Hampshire and Leghorn all have large and small types. 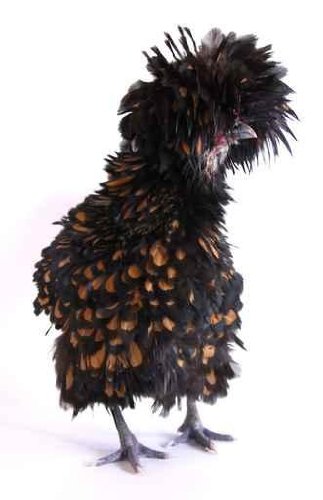 New breeds have been developed for many years by crossing various breeds in an endeavour to enhance a particular trait. The Australorp originated from the English Orpington and selective breeding of Rhode Island Reds resulted in the New Hampshire breed.

So, as you can see, 'chicken' is a very broad term covering an infinite variety of characteristics.