I'm the man who's gonna be King of the Writers!
InfoBarrel is a writing platform for non-fiction, reference-based, informative content. Opinions expressed by InfoBarrel writers are their own.
InfoBarrel > Lifestyle > Fashion

A Guide to the Best Selling Watches--A History of Watches

A history of watches to pass the time

Throughout the history of watches, people have often been really (and justifiably) picky when it came to choosing which specific timepiece to buy, looking only to wear the products of the best selling watch brands. While watches do serve a practical function (telling time), they have served as status symbol jewelry even before everybody had a time-telling smartphone in their pocket. Watches have evolved over time and have come in many different forms, but the best selling watch brands know how to keep their products updated with new trends and technology. Before we take a look at some of the top selling names in wristwatches, let's take a look at the history of watches to see how we got to where we are today.

The first watches appeared in 15th Century Europe and are widely believed to be the invention of a clockmaker named Peter Henlein, although no definitive proof of this exists (many clockmaker at the time were making miniature timepieces that could be worn on the body). The first watches were mechanical devices that worked by winding a mainspring that turned the gears. Time was kept via a balance wheel which would rotate, its back-and-forth movements moving the hands of the clock forward a set amount (they are responsible for the “tick tock” sound in mechanical clocks). The balance wheel is attached to a piece called a hairspring, over-coiled as to allow the wheel to move back and forth via a process called “escapement”.

Mechanical watches are actually significantly more complicated than that, and weren't made “in a vacuum”, so to speak. Even before the digital timepieces of today, mechanical watches have greatly changed over the years and have become more and more complex. So let's take a second and look at the following 1949 film produced by the Hamilton Watch Company which details how a mechanical watch actually works.

So that is a brief history of watches, as well as a quick look into the workings of both mechanical and quartz watches. Now let's talk about some of the more popular products of the best selling watch brands out there.

The first up is the U.S. Polo Assn. Sport Men's US9057 Watch. An Amazon Best Seller, and you can see why. It's sporty and simple, but has a slight elegance to it at the same time. Even a quick glance at it would give you the impression that this is more than a simple, regular watch. A bright orange Japanese Quartz watch, this timepiece has dual analog and digital displays that are shielded by a protective mineral crystal dial window. Some of the features include a stopwatch, timer, and EL backlight. A timer is especially useful if you are running or something like that, trying to see how many miles you can jog in ten minutes. That would fit a nice, sporty timepiece like this.

Customer reviews are overwhelmingly positive. Out of 428 reviews on Amazon, the average rating is 4 out of 5 stars. Not bad at all, right? It's a functional watch that commands attention from those who catch a glimpse, and at just over $20, you really can't go wrong. Plus, it has a two year limited warranty. 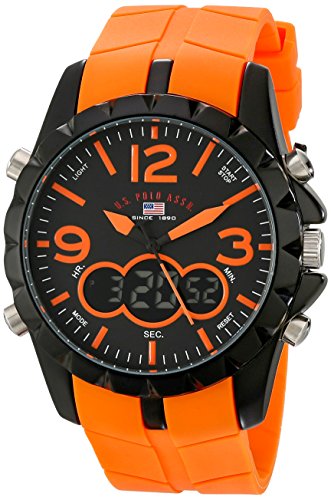 Of course, not everyone is looking for something bright and orange. Perhaps you are in the market for something that commands a little less attention, but just as much respect. Something that would be appropriate with a suit and tie that you can wear at a business meeting.

Look no further than the 1542 Men's Sport Classic Watch. Despite having “sport” instead of “business” in its name, it's a watch that would fit right at home on the wrist of a Wall Street stockbroker or a big time corporate executive. The black leather strap mixes in perfectly with the black face of the clock, which in turn contrasts beautifully with the white hands and numbers. It's a quartz watch with a two year warranty, and its analog display doubles as a chronograph (a stopwatch/display watch combination that utilizes an independent sweep second hand that returns to zero after being wound to record a specific amount of time). You can thank the American division of Davis Watches for this product.

But you're not exactly looking for something modern, let's say. Maybe after watching that video on how mechanical watches work, you're in the market for one. You are looking for something old fashioned and simple; the type of watch that your grandfather would have worn on his wrist. Are any of the best selling watch brands making anything to suit this particular need? Is there a timepiece out there for you? The answer is yes.

The AMPM24 White Dial is an old fashioned mechanical wristwatch. It has a coffee-colored synthetic leather wristband and a white face. It uses Roman numerals instead of Arabic numerals, giving this watch a “classic” feel to it (though there are numbers on it that are Arabic, but those are the noon-midnight military time numbers). But just because it's a mechanical watch with a slight old-timey feel to it doesn't make this thing a fragile piece of 17th Century technology or anything like that. It's stainless steel case is water resistant to a depth of 30 meters. Just remember to wind the watch. It is mechanical, after all. 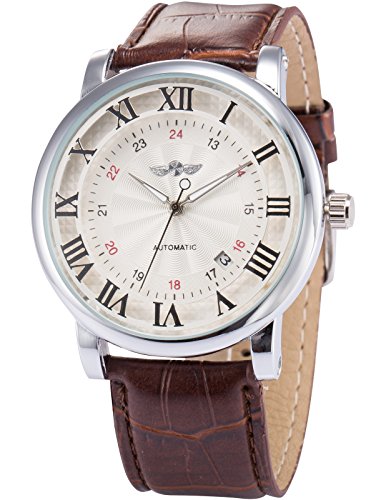 AMPM24 White Dial Mens Automatic Mechanical Date Brown Leather Wrist Watch PMW099 Amazon Price: $62.99 $29.24 Buy Now(price as of Sep 29, 2016)
Also, according to the reviews, it's built for large-framed men. I guess if you are a 5'1" girl with very dainty wrists, you may want to look for something else?

We've covered a small piece of the history of watches (most notably how mechanical and quartz watches work) and we've covered some products by the best selling watch brands. But we've only scratched the surface of this topic. There are so many different types of watches with so many functions and styles that it would take forever talk about all of them. But I might look at more top selling timepieces in the future............if I find the “time”.