I'm the man who's gonna be King of the Writers!
InfoBarrel is a writing platform for non-fiction, reference-based, informative content. Opinions expressed by InfoBarrel writers are their own.
InfoBarrel > Lifestyle > Fashion

A Guide to the Best Selling Watches Part 2: Men's Fashion vs Women's Fashion

The Evolution of Wristwatch Fashion

Prior to the wristwatch, members of the nobility wore clock-watches, later called “Nuremberg eggs” due to their shape. They didn't have glass covering, but rather ornamental and decorative brass that was designed in a way so the time could be read without opening the covering. They only had hour hands, had to be wound twice a day, and were notoriously inaccurate. But accuracy didn't matter, as these pendant clock-watches were valued as jewelry and novelties, not as timepieces with practical uses.

After that, men's fashion and women's fashion began to diverge in the world of watches. While women continued to wear watches around their necks as pendants, men began wearing them in their pockets starting around 1675 when waistcoats were introduced by Charles II of England. The shape of these pocket watches evolved to fit inside men's pockets; they became flatter and round, losing all their sharp edges so as to not rip clothing.

The first wristwatch was believed to have been given to Queen Elizabeth I of England in 1571 by Robert Dudley. Although women primarily wore pendant watches in the beginning, they slowly began to wear wristwatches as well. Just as the clock-watches of old were seen as decorative jewelry, wristwatches were marketed as bracelets for women. By the late 19th Century, wristwatches were worn exclusively by women while men used pocket watches. For a man at the time, wearing a wristwatch would have been the modern equivalent of wearing frilly clothing and pantyhose.

This man would never be caught dead wearing a wristwatch.

This changed due to, of all things, military necessity. It was important for different army divisions to be able to synchronize attacks and maneuvers without signals that the enemy would detect (such as the flute playing and drumming of old). Pocket watches were impractical on the battle field, but wristwatches were not. Military commanders started wearing them in battle, and watch companies such as Mappin & Webb began advertising and mass producing them as Britain entered the Anglo-Burma War, the Boer War, and other military campaigns. While these were essentially pocket watches with wrist straps, World War I created a demand for watches that could withstand trench warfare and artillery strikes. Almost every soldier and pilot during World War I used a wristwatch, and the fashion followed these troops home once the war ended. By 1930, there were 50 wristwatches for every pocket watch, and they were marketed towards both men and women.

But men's fashion and women's fashion were—and still are—very different. So let's take a look at some of the different best selling watches that are marketed specifically to men and women.

If you remember my previous article on best selling watches, I spoke about another watch from this company. Here is another Amazon Best Seller from U.S. Polo Assn. This sleek sports watch features an alarm, timer, back-light, day and date functions. It's water resistant up to 30 meters, and has both a digital and analog display. This quartz watch goes for a pretty low price, and with a 10 year warranty, you really can't go wrong.

What's great is that it doesn't really draw too much attention to itself, unlike its bright orange cousin that I covered in the other article. It's a sports watch that doesn't look like a sports watch. Or at the very least, it looks like something that could be worn with a suit in a fancy restaurant. It definitely doesn't look like a piece of sports equipment. It's elegant and professional, and to quote one Amazon reviewer: “To the average person, this watch would look like $500”. 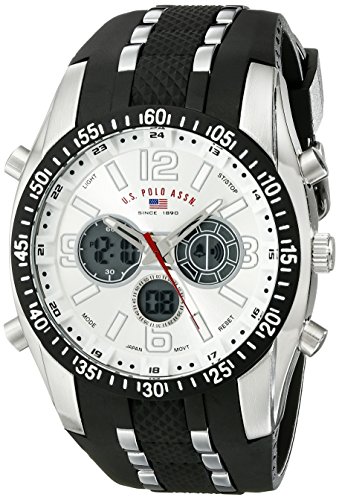 This is a simple but very elegant women's watch. The protective mineral crystal dial window houses a champagne analog face, its hands powered by Japanese Quartz movement. The gold-tone numbers blend into the clock face, yet are still easy to see and give a distinctiveness to the overall look of this wristwatch from Anne Klein. The brown straps give the watch a very basic feel to it; it's classy, not flashy.

Just as the men's watch from U.S. Polo Assn. was the perfect thing to wear with a suit, this piece of women's fashion would work well with any dress. Its cream colored face gives off the impression of a bracelet while the leather straps keep the wristwatch from looking like nothing more than a piece of jewelry with no practical utility. With an average 4.5 out of 5 star Amazon customer rating, this simple piece of women's fashion is definitely worth owning.

Even in the world of the best selling watches, there are differences in men's fashion and women's fashion. These differences can be subtle or wild, but that doesn't change the basic nature of the wristwatch. From the clock-watches of old to modern wristwatches and wrist-mounted smart watches, the watch and the fashions that accompany it will forever be changing to keep up with the styles of the day.