Buy the PDF version of Sorcery & Steam from RPGNow or the original hardcover from Amazon. You too can earn money from writing articles by signing up for InfoBarrel.
InfoBarrel is a writing platform for non-fiction, reference-based, informative content. Opinions expressed by InfoBarrel writers are their own.
InfoBarrel > Entertainment > Games

Sorcery & Steam by Mark Chance, Gareth Hanrahan, Lizard, Brian Patterson and Ross Watson is a role playing game supplement published by Fantasy Flight Games as part of their Legends & Lairs series of supplements that were originally intended for the d20 System but have, since changes to that license, become covered by the Open Game License (OGL)[1] instead. Parts of the book are designated Open Game Content under the OGL. These are indicated throughout the book in the relevant sections.The product reviewed was the OGL version of the PDF, which is not available as a Print on Demand supplement, although there are still hardcopy versions of the original d20 supplement around. The PDF is watermarked, where the purchaser's name and the order number are marked on every page of the PDF. The PDF is 175 pages long. Two pages are taken up by the full colour front and back covers. One page is a greyscale version of the front cover, one is a credits page and one the Contents page. One page is taken up by a Welcome page and another by the Open Game License. Two pages are taken up by the rear index and another two by tables combining the details of the equipment found throughout the book.

Credit: Fantasy Flight GamesThe book is divided into five chapters. Prior to them is the Welcome page which gives an overview of the book and mentions the Open Game License.Chapter 1 is Steampunk Campaigns. This considers the look of steampunk and covers several ways of adding steampunk to a campaign. How steamcraft would affect a campaign, from transport to religion, and how to build one based around steamcraft are also covered. There are examples of how steamcraft would have an effect, with overviews of a dungeon, village, wilderness and city as well as a siege. Finally in the section are steampunk adventures, and how to adapt existing adventures to a steampunk setting, which is probably one of the more important considerations.Chapter 2, Character Classes, covers the various classes and how to use them. It starts with the normal classes that can be found in OGL games and considers how they would be affected by and what they would do in a steampunk setting. There are also some new classes covered in detail, and finally some prestige classes. This chapter takes up a significant proportion of the supplement at 68 pages, and there are a lot of new character options. The prestige classes also include descriptions of various organisations based around them, with details on how to integrate them into a campaign, as well as the non-player characters who run them.Chapter 3 is Skills, Spells, and Feats and, as the title suggests, covers new skills, new feats, heritage feats and new spells. All the new skills and feats have a steam or steampunk theme.Chapter 4, Steamcraft & Blackpowder, is based on equipment, either related to steam, clockwork or blackpowder. There are many different blackpowder weapons as well as rules for incorporating them into the game, and what would happen if they, or other steampunk equipment, should malfunction. Some of the items, particularly the firearms, are based on historical items.Chapter 5, the final chapter, is Steamcraft Vehicles. This has rules on vehicle movement, combat and malfunction, as well as details on a handful of steam-powered  vehicles. Like the previous chapter, some of these are based on historical vehicles.

The PDF file is bookmarked, although not very comprehensively. The chapters are all bookmarked, as are what are probably the major sections in the first four - the final chapter lacks and further bookmarks - but this leaves many subsections without bookmarks. The Contents page itself is not very useful, as it only covers the five chapters, rather than any of the sections within those chapters, of which there are many.The layout of the book is actually quite poor with some obvious errors. At the end of Chapter Two, on page 96, the Campaign Integration section for the organisation being discussed is missing a part of it, and there was enough room on the page to have it. In Chapter Four, on page 135 in the Options section of Steamcraft Armor, the image on the page has been placed over the majority of the text rather than the text flowing around it. This may be fixed in the future; there were previously more instances throughout the book where this had occurred. Many subheadings are at the bottoms of pages or page columns, with the text that the subheading relates to in another column or on another page, which looks poor. The artwork looks to have been commissioned for the book, rather than it being existing work that has been used. This is all greyscale, and only the front and back covers are in colour.This book is not exactly standalone, and not just from the point of view of it being originally a supplement for the d20 System, and later an OGL product, which therefore means that it need a compatible game system to run it with. Although it does provide quite a bit of information on steampunk, including items and organisations, it is not really a campaign in and of itself. Instead, it will probably work best as a supplement to be used to add some steampunk features to an existing campaign, picking and choosing those parts of the books that are wanted, rather than trying to completely overhaul and rebuild an existing fantasy campaign as a steampunk campaign. This could be done as a gradual process. Otherwise, using the book would require building an entire campaign from scratch, which may be too much work. A lot of the book - getting on for half of it - is devoted to character classes, which is possibly too much, although the examples of integrating prestige classes with organisations are useful. Sorcery & Steam isn't really that suitable by itself to create a fully-fledged steampunk campaign, but at its current price of $4.95 for the PDF, it's worth getting for anyone planning to add a steampunk element. 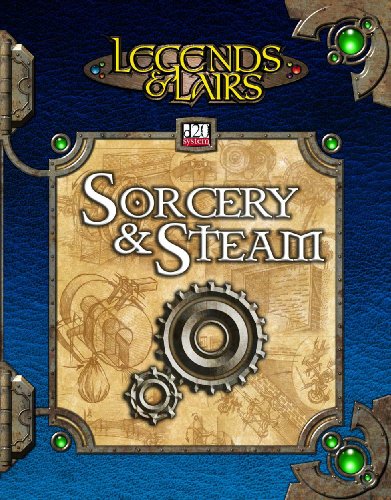