Get City Builder: A Guide to Designing Communities from RPGNow.com. You too can earn money from writing articles by signing up for InfoBarrel.
InfoBarrel is a writing platform for non-fiction, reference-based, informative content. Opinions expressed by InfoBarrel writers are their own.
InfoBarrel > Entertainment > Games

City Builder: A Guide to Designing Communities by Michael J. Varhola and Jim Clunic is a role playing game supplement intended to help with the design of cities, and other communities, and published by Skirmisher Publishing LLC.The supplement is a digital product that is available in PDF and comes in high resolution format, which is designed to be printer friendly, and low resolution, intended to be device friendly and which is smaller in size. Although one version is printer friendly, it is not available in print on demand. City Builder was originally published as a series of eleven supplements which are now combined in one volume, with what looks like the addition new material such as two new appendices. City Builder is available to purchase from RPGnow.com. An additional file included with the purchase is Issue 0 of the quarterly multi-platform gaming supplement d-Infinity, which has an article entitled The Quarry, which is formatted in a similar way to the various sections of this book and consequently works as additional material.

Credit: Cornelis Springer/Skirmisher Publiching LLCThe first chapter in the book is Communities. This is the largest single chapter and covers communities of different types, from small to large and including specialist types such as plantations, rather than just covering cities. This discusses how communities can be affected by regions and races, the types of buildings and construction, including fortifications, and physical characteristics that are seen as well as the various different disasters, both natural and not, that will affect cities, the different types of inhabitants, and how they could be dealt with, as well as laws and enforcement.The next chapters cover the different types of buildings that are found in cities. These are divided into Craftsman Places, Entertainment Places, Professional Places, Tradesman Places, Mercantile Places, Service Places, Scholarly Places, Religious Places, Governmental Places and Underworld Places.Each of these chapters has an introduction, which provides a general overview of the types of buildings these cover and what uses adventurers might find for them and their occupants. The chapters then continue with more specific details on the places broken down into types, so that Craftsman Places has articles on Armouries, Arsenals, Blacksmithies etc. These provide a more detailed description of what you might find in each individual type of place, the work or whatever carried out, security, what goods might be available, whether they can be broken into more specialised types and frequent examples from history and fiction of the type of place, or the NPC who works there, under consideration. Each individual place then concludes with one or more adventure hooks, describing a brief idea for getting the characters involved.The two appendices are Guilds and Inn and Tavern Generation. These provide random generators for adding guilds to a community, as well as how each guild is organised, and similar generators for inns and taverns. This allows such things to be easily and quickly generated, with the outcome being altered dependent on a number of factors, such as the size of a community. These results can then be tweaked to ensure that they fit together better, both with the city in particular and the campaign in general.City Builder does have a number of illustrations, both full and part page, throughout, although these are images from a variety of, frequently public domain and vintage, sources, rather than being done specifically for the book. This includes a handful of building floor plans from historical sources, which are provided as examples and come with details explaining them. More example plans would have been better, even if it did expand the size of the book, but this may not have been possible, given that only historical examples were being used rather than creating ones specifically.

Credit: John Constable/Skirmisher PublishingCity Builder may, in theory, be designed for the d20 system, but in practice it is a much more general book that is easily usable with other systems, as it mostly lacks system specifics. One of the few areas where this is less true is in the Racial Influences section of Communities, where the different races are the standard d20 types with their standard characteristics - which, admittedly, are common to other games systems too. This is also true whenever specific races are mentioned throughout the book, but these can be replaced by more relevant references in different systems - perhaps cultures rather than races.There are a number of references in the text to other Skirmisher Publishing products, but these are only suggested when those products are relevant to the topic at hand, so this is not a sales letter for everything else the company produces. Although no bibliography is provided, by reading the supplement you can determine that a number of different sources, both historical and fictional, were used to create it. When these examples are mentioned they can then be researched for more detail on that particular subject.The level of detail in each individual place type example is at a good enough level, and detailed enough, that designing such a place from it should be relatively easy. Many building types described will not just be seen in cities, and examples of how these can be used and in what form in other, smaller communities, or even as solitary buildings or complexes, are also provided, meaning that City Builder can be used to create many different types of communities and encounter places.As mentioned, the supplement is really not specific to the d20 system and is therefore a useful resource for all system types. The individual supplements can still be purchased separately, as can a bundle containing them all, but this combined book is better value for money than either, as it is both cheaper than buying them individually or as a bundle and contains additional material. Only if details on one specific category of place is needed should the separate supplements be considered instead, and once a few of those are needed, that becomes an uneconomical way of buying it.The book is aimed at building historical type communities in a fantasy role playing game setting though, rather than those of early industrial, modern or futuristic types, and so should not be considered for those settings. City Builder is a good, general guide that is recommended for anyone planning to build a city, or smaller community, in their game world. It can also be a useful resource for those building cities in computer games, or mods for games such as Oblivion, of the same type. 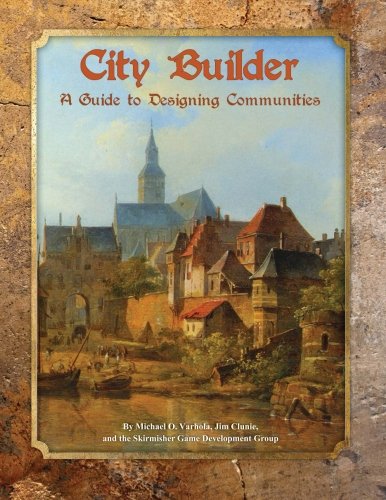