Get the original Adventures in Arkham Country from Amazon. You too can earn money from writing articles by signing up for InfoBarrel.
InfoBarrel is a writing platform for non-fiction, reference-based, informative content. Opinions expressed by InfoBarrel writers are their own.
InfoBarrel > Entertainment > Games

Adventures in Arkham Country by Kevin Hassall, Scott Aniolowski, Todd A. Woods, Fred Behrendt, Andrew Leman and Jamie Anderson is a role playing game supplement published by Chaosium Inc. for use with their horror game based on the works of H. P. Lovecraft, Call of Cthulhu. This is the second scenario collection in the Lovecraft Country series and the sixth supplement in the series overall. The scenarios are set in Lovecraft's New England in the 1920s.This book is a set of five adventures, again set in and around the various locations that have been detailed in earlier books in the series. The supplement is not currently available as a PDF, and was never overhauled like some of the Lovecraft Country supplements were, but copies of the original printed book can still be found on Amazon. The version reviewed is, therefore, the original printed book. The book has 128 pages, of which four pages are the front matter and Contents, one page the Introduction, one page a map of Lovecraft Country and there are three pages of ads for other products.

Credit: Chaosium Inc./Stephen KingA Happy Family is the first adventure, and is set in the fictional town of Mayotteville near to the actual town of Bolton. The players investigate the disappearance of a child, and possibly children later on in the scenario, of a recently widowed friend.The Whore of Baharna is the second scenario and, although part of the story is set in Kingsport, much of the adventure is actually set in the Dreamlands, the town having a strong connection to that realm. Ownership of Chaosium's supplement H. P. Lovecraft's Dreamlands is apparently not required, but it would probably be helpful, given just how much of the adventure takes place there, as the players are recruited to stop the dream form of a Kingsport resident from killing the young men of a city in the Dreamlands.Bless the Beasts and Children starts off in Arkham and continues to Falcon Point, near Innsmouth. Not surprisingly, this particular scenario involves the deep ones, as a former preacher is trying to raise children in the company of these creatures, so that they become more accepting. The children are kidnapped, which is how the players become involved. Brief details are given as to what to do should the raid on Innsmouth already have taken place.The Dark Wood is set near Dunwich and involves an archaeological dig which has come across what the person running it believes is a Viking burial chamber but is actually a Hyperborean (from the works of Clark Ashton Smith) laboratory, and involves the machinations of a Hyperborean descendant.With Malice Aforethought is set primarily in Arkham. This final scenario is by far the largest, taking up almost the same number of pages as the other four combined. This scenario again involves the Dreamlands, but this time is completely set in the waking world; the main foe simply hails from the Dreamlands. The players get involved with murders at Arkham Sanatorium, for which they are arrested, resulting in the case having to be solved by secondary characters.

The Contents are adequate, with the individual scenarios and most of the major subsections listed, but they could be better. The covers of the book are in full colour, but the internal illustrations are all in black and white. These illustrations are primarily illustrations, ranging from around a third of a page to a full page, that are relevant to the nearby text, as well as some maps that have a hand drawn appearance. Rather unusually for a Call of Cthulhu supplement, the various non-player characters are not illustrated by portraits of their heads. The book is primarily text rather than images, but the images are decent and suitably illustrate the text.Unlike some of the other supplements published for Call of Cthulhu, the various player handouts are only within the text itself, and are not additionally collected at the back of the book. Although this does reduce duplication of material in the book, it is far easier to have all of the handouts together in one place. There are some minor grammatical errors, primarily missing words, within the text, but nothing terribly major. There are some new spells, minor Mythos works and monsters, but much existing material is used.

Credit: Chaosium Inc./John T. Snyder/Tom KalichackAs is comparatively common in Call of Cthulhu games, many of the scenarios are quite hard on players, as they face opponents and situation in which they automatically die, with no chance of actually defeating the enemies they face. In particular, the final scenario, With Malice Aforethought, will probably be quite difficult to both run and play. There is a court case where the original characters are tried for murder which takes up a significant amount of the scenario. Because of this court case, the primary characters of the players will spend a significant proportion of the scenario locked up in jail, with the chance that they may even remain in jail, or be executed. This will mean that the players will need to use other characters in order to continue playing. Some suggestions are provided, but they will probably need fleshing out. Running the court case itself may also be tricky, and finding the evidence to get the imprisoned characters released does look to be largely impossible, leaving much of the case down to the skills of the legal representatives. The case can be run by either dice, or by getting a third party to listen as it is presented like an actual case. Either way, this seems unlikely to appeal to many players.The biggest problems with this supplement are probably the second scenario, The Whore of Baharna, which is set in the Dreamlands, and the final one, With Malice Aforethought, which will require most players to run at least two - possibly more - characters during it. The first and second scenarios also have the least connection to any of the preceding Lovecraft Country supplements. Adventures in Arkham Country can be used to add more adventures to the Lovecraft Country setting, but it doesn't really do it as well as the first collection of scenarios, Tales of the Miskatonic Valley, did. 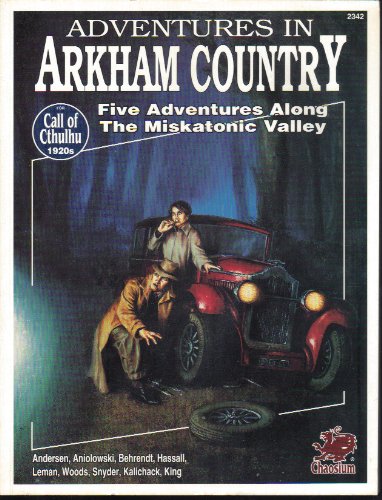 Adventures in Arkham Country: Five Adventures Along the Miskatonic Valley (Call of Cthulhu) Amazon Price: Buy Now(price as of Oct 1, 2016)
Next >> No Man's Sky - How to Efficiently Farm Money