Buy the original Arkham Unveiled from Amazon or get the updated PDF H. P. Lovecraft's Arkham from RPGNow. You too can earn money from writing articles by signing up for InfoBarrel.
InfoBarrel is a writing platform for non-fiction, reference-based, informative content. Opinions expressed by InfoBarrel writers are their own.
InfoBarrel > Entertainment > Games

Arkham Unveiled by Keith Herber is a role playing game supplement published by Chaosium Inc. for use with their Call of Cthulhu horror role playing game, which is based on the works of H. P. Lovecraft, and is set in the 1920s. Arkham Unveiled was the first in the Lovecraft Country series of supplements, although it was not originally marketed as such - it wasn't until the second supplement in the series, Return to Dunwich, was published that the books were described inside as being such.

Credit: Lee Gibbons/Chaosium Inc./eGDC LtdThis particular supplement covers the fictional town of Arkham, which played a major role in Lovecraft's New England. The town itself and, especially, Miskatonic University, were both the primary scenes of many stories by Lovecraft and, later, other writers in the Cthulhu Mythos, and were also referred to in those set in other places, as inhabitants of the town played some role in stories set in other places. Arkham is on the Miskatonic River, just a few miles inland from Kingsport - Kingsport Head, which is covered in more detail in Kingsport: The City in the Mists, is briefly mentioned in this supplement, as it is only just off the edge of the local map. The date of the setting is nominally October 1928, after the events of The Dunwich Horror, although several stories that would have happened by this point are covered more flexibly, with changeable dates if required. The supplement is a combination citybook and adventure book.There are two detachable handouts at the front and rear of the book; a copy of the Arkham Advertiser for Thursday, October 11th, 1928, a four page newspaper for that date, and a 17"x22" Chamber of Commerce map of the town in the rear, although in the index they are described as being the other way around. Arkham Unveiled is not currently available new, either in print, print on demand or PDF, but print copies can still be found. It was rereleased as H. P. Lovecraft's Arkham, which is available in PDF on RPGNow. The copy reviewed is the original print version which has 160 numbered pages, which includes the front matter, table of contents and Introduction. Approximately ten and a half pages are taken up by player handouts. Like many Call of Cthulhu books, this lacks a traditional chapter structure.

Credit: Lee Gibbons/Chaosium Inc./eGDC LtdThe one page Introduction briefly covers the aims of the book, how Arkham is arranged - only the centre of the town is supposedly covered - and how some stories relate to it.Orientation discusses the climate, living and working in Arkham, local government, police and the law, and society and being respectable, Miskatonic University, as well as several ways that investigators can improve their skills whilst in the city. The latter options are covered in more detail at various appropriate points through the supplement.A Brief History of Arkham is what it says, a history of Arkham since its founding, and its present (1928) state, and it finishes with a chronology from 1643 to 1935 covering Lovecraftian events in Arkham and nearby areas in Lovecraft Country related to them.

Credit: Chaosium Inc./eGDC LtdThe Town Directory is two pages long and lists all the different locations that are covered in the guide, divided into types with their names and location numbers.A Guide to Arkham is a detailed location by location description of Arkham that takes up about half of the book. The town is divided into ten different regions; nine within the town itself and the tenth covering outlying areas. Various non-player characters, interesting items and potential points of interest are given where relevant, and, as well as the location number, the street address is also provided. A substantial number of locations are devoted to Miskatonic University, which later had its own entire supplement devoted to it, and there is a university directory laid out like the earlier Town Directory.Following this are four adventures, A Little Knowledge, which uses Herbert West - Reanimator for inspiration, The Hills Rise Wild, The Condemned and Dead of Night. These take place in and around Arkham, although some are set some distance away, they start in the town.

The table of contents is not as useful as it could be, as only some major sections are covered, and it lacks an index too. Finding specific entries can therefore be a bit time intensive. The Town Directory does help somewhat, as it does provide location numbers for the places covered in the guide, but it could have been improved if the page numbers were listed too. Consequently, the supplement doesn't have the best organisation when it comes to find anything specific.The art in the book is all black and white, excluding the full colour covers, and predominately consists of portraits of the various NPCs. There are a few larger illustrations, which are relevant to the nearby text, but the supplement is by and large mostly text. There are maps of areas of the city, some locations, and the surrounding area and, in the adventures, of various buildings and locations not otherwise covered. All the maps give the impression of being hand drawn.

Credit: Carol Triplett-Smith/Chaosium Inc./eGDC LtdThe fold-out player's map is not labelled with the numbers from the guide naturally enough, but this means that there is no one map that covers the entire town with the numbers; instead, the Keeper's maps are smaller covering various sections of the town. The map itself is nicely done, and the other supplement, the Arkham Advertiser, provides some interesting nuggets for the investigators. Miskatonic University plays an important role, as Arkham is definitely a university town, with much of its business deriving from or related to the university; consequently, the university has an enormous effect, and the later supplement, Miskatonic University, is a useful addition.As well as the four included scenarios, there are enough potential adventure hooks and possibilities from such as the NPCs and locations described, as well as recent events, to build many more adventures set in and around Arkham. Using the town much beyond the nominal timeframe of 1928 will be tricky. Some details are provided for a few later years, but these mostly consist of which businesses will fail during the Great Depression. Moving significantly outside that time period, either earlier or later, will require significant changes to be made to the town, especially given the changes in technology and thus anything related to them, and it also is not really suited for using outside of the world in which it is set. It could be used without too much trouble system-wise with any other system based on Basic Role Playing, but it really is best suited for the system and setting for which it was designed. Having said that, Arkham Unveiled is a very good and useful supplement for said system and setting, with plenty of detail provided on the town. 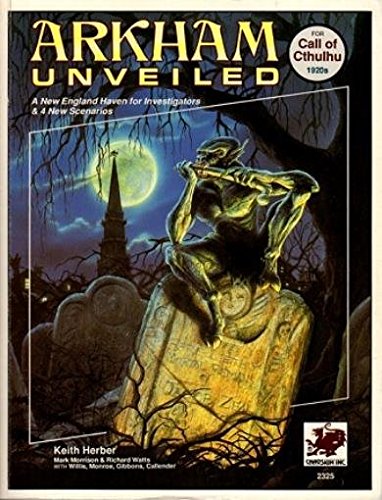 Arkham Unveiled: Adventures and Background in the Home of Miskatonic University (Call of Cthulhu) Amazon Price: $44.95 Buy Now(price as of Jun 1, 2016)
Next >> No Man's Sky - How to Efficiently Farm Money