Buy Carse from Amazon or the books in Raymond E. Feist's Midkemia series. You too can earn money from writing articles by signing up for InfoBarrel.
InfoBarrel is a writing platform for non-fiction, reference-based, informative content. Opinions expressed by InfoBarrel writers are their own.
InfoBarrel > Entertainment > Games

Carse by Stephen Abrams and April Abrams of Midkemia Press is a role playing game supplement published by Chaosium Inc. This is a generic fantasy citybook intended to be used with any game system. Carse is set in the world of Midkemia, which will be familiar to readers of Raymond E. Feist's books set in that world, starting with Magician, and the city will likely be familiar, in name at least, to readers of those books too. 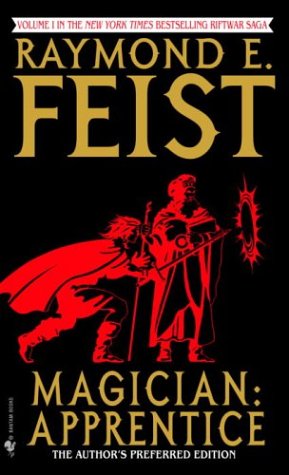 Magician: Apprentice Amazon Price: $7.99 $2.18 Buy Now(price as of May 31, 2016)
This is a 56 page softback book with a colour cover and black and white maps and illustrations inside. There is a colour map attached in the centre of the book, intended for players, which can be removed and which unfolds out to roughly A2 size.

The included map is printed mostly without labels, except for certain items such as bodies of water.

Credit: Dan and David Day/Midkemia Press/Chaosium Inc./eGDC LtdThe first section of the book, Introduction, has a brief history of the city, describes what the book contains and how to use it with your game system, as well as having brief details of three secret organisations, and covering rulership, justice and the market, and a map of the Bay of Carse.The next segment comprises the majority of the book, which covers the city section by section (there are thirteen in total). It starts with an overall map of the city, which is divided into areas. Each section of the city as described has an accompanying numbered map, which may cover several sections. The map also shows what the numbered locations are. These section maps are all parts of the included main map in black and white, with an illustration showing where the section is located in the city. Each lettered section also shows whether it can be considered to be merchant, wealthy or poor.Following on from this overview of the city, several buildings are described in more detail. These are the Temple of the Sky God, the Thieves' Guild and the City Building, each of which is also accompanied by a numbered floor plan, with the various rooms detailed, and finally Castle Carse, which lacks a floor plan but has a map showing the major buildings of the castle. The detailed descriptions cover some non player characters (NPCs) in more detail, as well as some items that could be found in the various rooms or locations in the buildings.

Credit: Dan and David Day/Midkemia Press/Chaosium Inc./eGDC LtdAfter this is Random Meetings, which are lists of people who can be met in various areas of the city (merchant, wealthy or poor). These people are often mentioned earlier in the text.Personages covers some major NPCs who are not so likely to be randomly encountered.Suggested Prices for Carse gives the cost for goods and services in the city, marked in gold pieces, or fractions of them.Carse Cross-Index: A Selection is broken down into different business types, and gives the names of businesses in those types as well as their relevant map number, so that they can be cross-referenced with the city overview.The building descriptions vary from a simple one of a couple of words, showing only the building type and occupant employment, to more complex ones describing the various character(s) who can be encountered there, and their motivations, items, skills, as well as the comparative quality and price of any goods sold, which can be cross-referenced with the Suggested Prices section at the rear of the book. Each description follows the same layout, only some of them are expanded.

This may be a generic supplement, but it is weighted towards the Advanced Dungeons & Dragons game, with some descriptions of abilities, levels, items and stats that resemble those from that game, so this will be the easiest system to use it with, as well as the Second Edition release and the basic Dungeons & Dragons (rather than D&D Third Edition and above) rules. Carse was designed to accompany another generic supplement, Cities, and there are some references to that book.The citybook describes every single building in the city, which is highly unusual. Not every building is described as being occupied, as some are deliberately left vacant for the GameMaster's own use, but these are in the minority. This supplement came from an actual campaign world (that is still being played in) so it is likely that enough detail was accumulated to flesh out the city to this extent. There is room for both expansion and to add more detail, but this is true of any city supplement.

Credit: Carolyn Schultz/Midkemia Press/Chaosium Inc./eGDC LtdThe Midkemia described in Carse has differences to the version of the world which readers of the Midkemia fantasy books will be familiar with. It is not a part of the Duchy of Crydee, but is instead a separate independent city state. There are some similarities, though, such as in the names of deities and other countries.Carse covers little, if anything, of the world outside the city, bar some brief history, part of which forms the basis for one of the internal conflicts and two of the secret organisations described in the Introduction, and the map of the Bay of Carse. This makes it easy to add the city to another campaign world, as there is little to conflict with other material. The book lacks definite adventures, although there are a number of possible adventure ideas that could be fleshed out throughout the text. These can mostly be found in the descriptions of the various NPCs, of which there are a substantial number, probably several hundred in total, described in various levels of detail, with many different possible threads.Although Carse, and the rest of the supplements from Midkemia Press, are not currently available in printed form, except for second hand, Midkemia Press has released Cities, which this book is designed to accompany, as a PDF and state that they hope to get the rest available digitally in the future.[1] Carse is a good city base for a GameMaster who wants a detailed city, but does not have the time to create one. 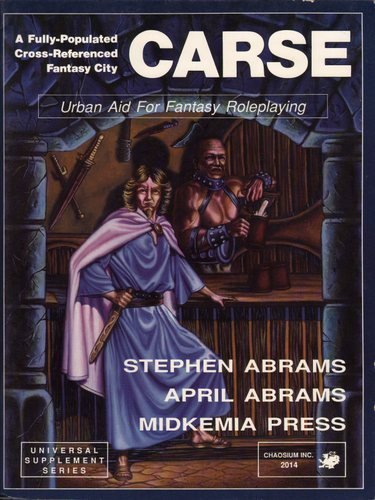 Carse: Urban Aid for Fantasy Roleplaying (Midkemia) Amazon Price: $163.44 Buy Now(price as of May 31, 2016)
Your UNIQUE item description *optional*
Next >> No Man's Sky - How to Efficiently Farm Money