Get Clockwork & Cthulhu and Clockwork & Chivalry from RPGNow. You too can earn money from writing articles by signing up for InfoBarrel.
InfoBarrel is a writing platform for non-fiction, reference-based, informative content. Opinions expressed by InfoBarrel writers are their own.
InfoBarrel > Entertainment > Games

Clockwork & Cthulhu by Peter Cakebread and Ken Walton is a steampunk role playing game supplement published by Cakebread & Walton for use with the Renaissance game system. The supplement is described as "Horror Roleplaying in the world of Clockwork & Chivalry."Like Clockwork & Chivalry, this supplement is set in an alternate version of the English Civil War. The date of both is 1645, and events have already diverged. King Charles I was captured at the Battle of Naseby, and beheaded shortly afterwards, rather than in 1649 as was actually done. Prince Rupert now serves as regent from his capital at Oxford, whilst the Parliamentarians control London. Further adding to the differences, various clockwork inventions have been created that are being used in the war, and magic is real.Clockwork & Cthulhu is influenced by the Cthulhu Mythos writings of H. P. Lovecraft, and adds an element of horror from beyond to the purely terrestrial terror of the Civil War. This is a "clockpunk" rather than "steampunk" setting in which magic also works. Parts of the supplement are considered to be Open Game Content under as Open Gaming License; these are essentially the system-specific, rather than setting-specific, content.

Credit: Gary Buckland/Cakebread & Walton/eGDC LtdClockwork & Cthulhu is available as a 165 page watermarked PDF from RPGNow (watermarked PDFs have the purchaser's name and the order number added to every page) and also as black & white print on demand softcover and hardcover books. One page is the full colour front cover, one page is the Open Game License, two pages are front matter and credits, one page the Table of Contents and there are four blank pages at the end of the book. The supplement normally costs $17.99 for the PDF, $27.99 for the softcover book, and the same for the softcover and PDF, $27.99 for the hardcover book, and again the same for the hardcover and PDF, but the PDF was purchased at an offer price of $13.49.The Introduction introduces the game, the setting and the areas in which it differs from real history, the Civil War, religion and what else is needed in order to play the game; described as just being the free Renaissance rules, which would appear to be the System Reference Document that is available on the website.The first chapter, The Mythos introduces the background and Lovecraftian influences on the setting (frequently called the Cthulhu Mythos), such as cosmic horror, alien gods and ancient civilisations, and what is known of the Mythos at that point in history. It also introduces new skills and attributes relevant to a campaign influenced by the Mythos, as well as how to handle non-Mythos fantastic creatures in a Mythos environment.Sanity is a chapter that considers an important part of Mythos lore; namely that delving into things that man was not meant to know has a deleterious effect, and can, and probably will, drive delvers insane. This chapter therefore covers sanity, insanity, how to cure it, how to prevent it, and what effects it will have on a character.Mythos Magic introduces several new spells related to contacting or summoning Mythos creatures, how spellcasting works, and one Mythos tome - the Necronomicon. Two more Mythos books are detailed later in the book, and more are available in the free supplement, Tomes of Blasphemous Knowledge.Factions are various groups or organisation that characters may come up against, or even belong to. Many exist to advance the purposes of Mythos beings; a few are there to protect humanity. Factions have enemies and allies, and benefits for belonging to them. There are half a dozen new Factions added; throughout the book, there are references to other Factions which are covered in the normal Clockwork & Chivalry setting. There are more available in the supplement Guardians of Blasphemous Knowledge.Bestiary introduces Mythos creatures. It can be divided into two section: regular monsters and gods. There are ten Mythos creatures described, many of which are encountered in the Adventures section, and five Mythos deities.Adventures, the final chapter, is the largest section of the book and has three pre-made adventures, The Doom that Came to Oxford, The Bay of Terror and The Whisperers in Furness. Appendix: Ready-to-Play Adventurers has six pre-made adventurers.

Credit: Gary Buckland/Cakebread & Walton/eGDC LtdThe PDF has been extensively bookmarked, which improves navigation. The Contents is adequate, although it could have been better, and there is no overall index. Only the Renaissance rules, which are available in a free version, or as the Renaissance Deluxe version, are said to be needed to play, but this supplement will really work better when used with the Clockwork & Chivalry rulebook, which is also set in the English Civil War, and gives more details and background on the setting. There are also more adventures for the Clockwork & Chivalry setting, and throughout this supplement there are suggestions on how to integrate material from the two together. There is unfortunately not that much in the way of supporting content for Clockwork & Cthulhu, bar that which is available for Clockwork & Chivalry, and there are a number of references to material from those.A substantial proportion of the content of this supplement - almost two-thirds - is the Adventures chapter. Clockwork & Cthulhu does not stand by itself, as it isn't a rule system so many rules needed to play in the setting are missing, which means that you have to have another supplement in order to play it, whether that be the free rules or, preferably, Clockwork & Chivalry, and there are too many references that do not make sense without those.As such, it should be considered to be an expansion supplement for an existing system and setting - the system is somewhat tied to the setting in this case - rather than anything else. The three adventures, however, could probably be adapted fairly easily to another setting based on the Cthulhu Mythos; primarily, Call of Cthulhu.This is a pseudo-historical setting, which is something it has in common with many steampunk games. Some events and people are real, others are different or the familiar has been changed somewhat, there is technology that wouldn't normally exist. Clockwork & Cthulhu is an interesting supplement for playing a Lovecraftian game in an atypical time period, but it should not be considered to be a supplement that works by itself. 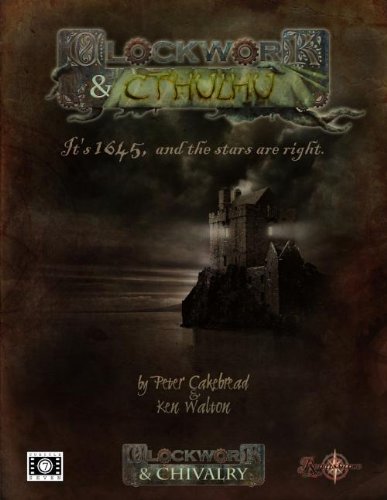