Buy Emer Atlas III: The Southeast or more Shadow World supplements on RPGNow. You too can earn money from writing articles by signing up for InfoBarrel.
InfoBarrel is a writing platform for non-fiction, reference-based, informative content. Opinions expressed by InfoBarrel writers are their own.
InfoBarrel > Entertainment > Games

A Review of the Role Playing Game Supplement Emer Atlas III: The Southeast

Emer Atlas III: The Southeast by Terry K. Amthor is a role playing game supplement published by Guild Companion Publications for use with various iterations of the Rolemaster game system: Rolemaster 2, Rolemaster Classic, Rolemaster Standard System and Rolemaster Fantasy Role Playing. The supplement is set in the Shadow World fantasy setting; Shadow World is one of the more unusual fantasy settings in that there are also science fiction (it is also located inside the Terran Empire) and high technology influences in it, some of which are detailed in this supplement.Emer Atlas III: The Southeast is one of four planned supplements covering the continent of Emer, each of which focuses on a different "corner" of the continent. The supplement is available in several formats; colour PDF, standard colour softcover and standard colour hardcover, with PDF and print bundles also available. The printed versions are published through RPGNow's print on demand service, which also has a premium colour version, although this wasn't available for this product. Premium print versions have slightly better paper quality. It has 211 pages in total, 213 in the PDF including the full colour front and back covers. The cost of the book and PDF, when purchased, was $44.15, plus the delivery cost, shared between two products, of $7.95.

Credit: Craig John/Guild Companion Publications/eGDC LtdThe book is composed of twelve parts, including the Index - which is actually (in this copy) mislabelled as Part XIV not XII - which are preceded by a single page GameMaster's map of the region, which shows the various regions and sites of interest. The remaining area maps are in the Maps & Charts section, and building and location maps are located as appropriate throughout the book. Of the 211 pages, two are title page, credits and copyright, one is the table of contents, one is a Preface, six are maps and charts and four are the index. Those parts which cover an area inhabited by a distinct culture, or cultures, contain Cultural Summaries providing details of said culture(s). The various parts also have non player character charts at the end of them where appropriate.Overview is a brief, one page overview of the area.History has a Kulthean (Kulthea being the proper name of Shadow World) calendar and a broad timeline of the planet, together with more detailed descriptions of local events, focussing on Emer and the Southeast in particular.Climate, Geography & Inhabitants covers weather, including a weather table, land and water features, flora, including poisons, venoms, diseases and medicinal herbs, and details of various creatures and intelligent races that can be found in the region.Khûm-kaan covers one of the regions, and has some of the lost technology, in this case combined with the setting's magic, that can be found on the planet.Onar is another regional chapter, with more inhabitants and a major citadel of one of the significant powers on the planet.Ræl & the South Spine, another regional chapter, has another citadel, and more inhabitants including an alien insectoid race with some technology.The Isle of Jade is an island with an interesting history.The Isles of Glass are two islands, both inhabited by significant powers.Other Powers covers some of the major powers that affect the region that are based outside it, although some do have locations covered in the previous chapters.Adventures has a number of different adventures, including locations, set throughout the area. These are covered in a fair amount of detail, rather than simply being adventure seeds.Maps & Charts has a fantasy weapons chart and maps of the western hemisphere of Kulthea, the continent of Emer, and the southeast region of the continent.

The print on demand version of the supplement was ordered on a Friday and arrived the following Wednesday. The delivery was Royal Mail second class; first class is available, but the second class delivery has, so far, proven to be more than fast enough, given that the book needs printing and binding before it can be despatched. This is helped by the fact that it was a delivery to the UK and one of RPGNow's two current print on demand printers is in the same country.The hardcover version was ordered, along with one for Cloudlords of Tanara which reduced the cost of delivery, due to a promotion being run at the time, with the hardcover being $5 cheaper than normal, making it only $0.02 more expensive than the softcover.The standard version of the print on demand hardcopy books is perfectly fine, and the hardcover itself is of a decent strength. There was a reported issue with some of the maps and illustrations bleeding through the pages on earlier printings, but this has now been resolved.

The PDF is extensively bookmarked and searchable, making navigation of the electronic version easy. The print on demand version is, as described, good quality; better quality than a lot of mass market books. The book is not just text; there are illustrations and maps. The maps, local, regional and of buildings, are mostly coloured and there are beautiful, full colour illustrations on many pages.The Shadow World setting itself is an interesting one, with many different intelligent races and the influence of high technology, even though this does not have an effect in the everyday life of the vast majority of the inhabitants. This particular atlas has details of a hybrid magic/technology that has only previously been mentioned in passing. There are various references to groups and items that are not covered in full detail in this supplement, so it does not really work as a standalone resource. There are extensive details on the various cultures and many locations that are in the area, providing many possible adventure points and not just those detailed in the Adventures section. Emer Atlas III: The Southeast is a good addition for fans of Shadow World, and an interesting setting should it be adapted to other game systems (which may or may not be tricky, depending on the experience of the converter). 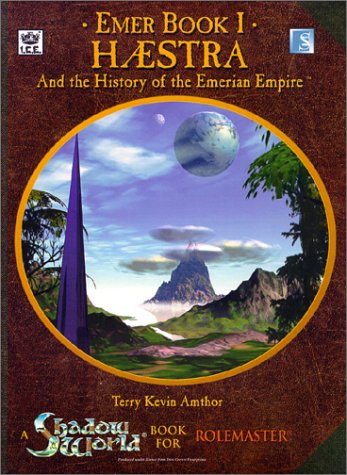