Buy Escape from Innsmouth from Amazon or find more Call of Cthulhu supplements on RPGNow. You too can earn money from writing articles by signing up for InfoBarrel.
InfoBarrel is a writing platform for non-fiction, reference-based, informative content. Opinions expressed by InfoBarrel writers are their own.
InfoBarrel > Entertainment > Games

A Review of the Role Playing Game Supplement Escape from Innsmouth by Kevin A. Ross

Escape from Innsmouth by Kevin A. Ross is a role playing game supplement published by Chaosium Inc. for use with their game Call of Cthulhu which is based on the writings of H. P. Lovecraft and set in the 1920s. This is the sixth supplement in the Lovecraft Country series, covering the town of Innsmouth in Lovecraft's Massachusetts. This supplement in particular is based on the novella The Shadow Over Innsmouth. The nominal date of this supplement is Autumn 1928, to match up with that of the others in the series; however, the events of The Shadow Over Innsmouth are set in February of the same year and this supplement is intended to detail the town before they happened, not afterwards. Consequently, that date should be ignored if Escape from Innsmouth is intended to be used with the other Lovecraft Country supplements.

Credit: John T. Snyder/Chaosium Inc./eGDC LtdEscape from Innsmouth is not currently available new in either print or PDF, although existing print copies of the book can still be found and it's possible that a PDF version may be sold on RPGNow at some point, or of the updated 1997 version may be released. This is a perfect bound softcover with 157 numbered pages, which includes the front matter and Table of Contents, and an additional three pages of product catalogue. There is an approximately 18" x 14" fold out map of the town suitable for players, as it lacks any building numbers. The covers of the book are in full colour, whilst the internal illustrations are in black and white. As is typical with these supplements, this one lacks a standard chapter structure.The one page Introduction gives an overview of the supplement and covers the fact that the nominal date is after the original raid on Innsmouth happened, and why this is.Mysterious Innsmouth gives the accepted and the secret history of Innsmouth, with an overview of the religious order based around the Deep Ones, as well as a chronology for the town and the new skill of Innsmouth Lore as well as rumours that can be uncovered in the town.Welcome to Innsmouth covers how to find the town - it is some distance to the north of Arkham - governance, crime and punishment. Given how the town is organised, these areas are rather non standard, although criminal actions can cause more problems for players, as killing a hideous Deep One hybrid is still considered to be murder in the eyes of the law. Also in the section is Innsmouth Magic, which are generally variants on existing spells intended to be cast underwater.

Credit: John T. Snyder/Chaosium Inc./eGDC LtdThe Shadow Over Innsmouth covers the effects of the alliance with the Deep Ones and how it has affected the inhabitants of the town, as well as the Deep Ones themselves and the order devoted to them. This section also provides sources of additional information about Innsmouth, a numbered town map and an index to the guidebook entries, divided into the areas of the town.A Guidebook to Innsmouth & Environs divides Innsmouth into nine areas, with a tenth being the outskirts of the town, the latter including the Deep One city and Devil Reef. Each location has various details, including non-player characters and some items of interest as relevant. Some of the ten areas have maps for them; for the others, there is only the overview map in the previous section. This accounts for roughly a third of the book.Escape from Innsmouth is the first of two scenarios set in the town, and the shorter one, in which the investigators attempt to help someone get out of Innsmouth alive.The Raid on Innsmouth is the second of the scenarios, and by far the longer. It is the largest single section of the book, even longer than the guidebook, and has the investigators participate in the raid on the town.Keeper's Aids and the following Supporting Character Sheets are designed to help make the major scenario easier to run, as it is quite complex.Sinister Seeds are five pages of adventure ideas, twelve in all, two set after the raid, that can be fleshed out to provide more adventures in the town.

Escape from Innsmouth in Review

Credit: John T. Snyder/Tom Kalichack/Chaoisum Inc./eGDC LtdThis supplement lacks an overall index and the Table of Contents could include more details. The guidebook index could have done with page numbers being given, not just the location numbers. As such, navigation of the book is a bit harder than it could be, and finding various characters, locations and items of interest requires more physical searching than simply looking a page up in an index.The illustrations are in black and white inside the book, and the majority are, as usual, portraits of various NPCs, with some larger illustrations relevant to the nearby text, as well as some area and building maps. This is another supplement where you are getting lots of text, not lots of pretty pictures.Despite everything, there are still quite a lot of inhabitants in Innsmouth, and these are covered, providing quite a few non-player characters to use. However, these are not as useful outside of the main scenarios, or possibly the adventure seeds at the end of the book.A substantial portion of the book and the major adventure is based on the original raid which, to a large extent, makes the town useless after that as described, as much of it is in ruins and many of the NPCs are now dead. Even though about a third of the book describes the town, this is not truly a citybook so much as an adventure location that is described in detail. After the first scenario, Escape from Innsmouth, is run it, as mentioned in the book, has a good chance of making it difficult for investigators to pursue most of the potential scenarios described in Sinister Seeds, which will need developing first.

Credit: Tom Kalichack/Chaosium Inc./eGDC LtdThe second, larger scenario is of a rather unusual type for a Call of Cthulhu game, and is based on the raid in The Shadow Over Innsmouth. It is split into five objectives which are not played in sequence; instead, players skip from part to part, as events in one objective can have a direct bearing on events in another, so until the former have taken place what will happen in the latter is not known. With these going on simultaneously, investigators are unable to be on all of the raids, although investigators are going to be assigned to each, if possible. Other players will run various non-player characters participating in the objective.This scenario involves a larger number of people, who are substantially better armed, as they have Treasury Agents, as well as members, and vessels, of the US Marines, Coast Guard and Navy, rather than the more usual situation of a handful of investigators going in alone. Not that the larger number of better armed people are necessarily going to be helpful, as some of them go insane during the events.Using the town in other settings is even more difficult than usual, as the entire book is heavily tied to The Shadow Over Innsmouth, not just Lovecraft's Massachusetts, so it isn't that useful outside of the set time period and setting. Escape from Innsmouth is still an interesting addition to the Lovecraft Country range, but it should only be considered to be the site of one major, and several minor, adventures, rather than a city that players will repeatedly revisit afterwards. 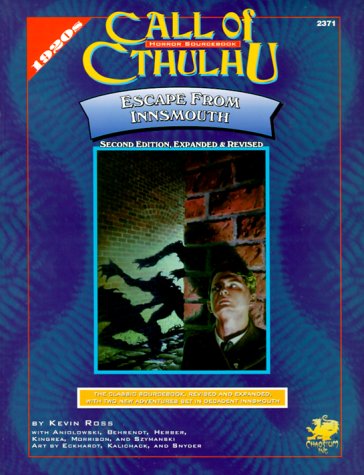