Get the original Fearful Passages from Amazon or the PDF version from RPGNow. You too can earn money from writing articles by signing up for InfoBarrel.
InfoBarrel is a writing platform for non-fiction, reference-based, informative content. Opinions expressed by InfoBarrel writers are their own.
InfoBarrel > Entertainment > Games

A Review of the Role Playing Game Supplement Fearful Passages

Fearful Passages is a role playing game supplement published by Chaosium Inc. for use with their Call of Cthulhu system based on the works of H. P. Lovecraft. This is a collection of nine adventures, each of which focuses on a different form of transport, set in a variety of locations in the 1920s.The supplement was originally available as a printed book, which is the one reviewed, but it is now available as a watermarked PDF for $10.42 from RPGNow. Copies of the original book can still be purchased from some sources such as Amazon. The book has 128 pages, of which two pages are the front matter and one page the Contents and Introduction. The Introduction gives a brief overview of the golden age of travel, when the journey was more important than the destination, partly because of the expense and time. It also splits the nine scenarios into groups of three, and gives some appropriate Call of Cthulhu 5th Edition skills to replace older ones.

Credit: Nick Snith/Chaosium Inc.The first adventure, Fear of Flying, sees the players on board a, fictional but possible, aeroplane as passengers. This scenario originally appeared in a shorter form in White Dwarf #72. There are details on early passenger aircraft, and the particular craft in question.The Iron Ghost is set on a train, which uses train diagrams from Horror on the Orient Express. Players board a train that basically eats passengers for Azathoth. Details on rail travel are also provided.Furious Driving is related to cars, and the players are involved after a near, or actual, accident involving a motor car. Details are provided of the car that nearly, or actually, hit them.Rigid Air is about airships, and the players have to defeat one which has been taken over by a Mythos being, including its crew. There are brief details of some airships of the 1920s.Crash Dive does not have any sanity-shattering encounters or monsters, as the players simply retrieve a Mythos artefact from the bottom of a lake. This adventure provides rules on using diving suits.Slow Boat is set on a canal boat in England, although one that travels to either the distant future - one that is inspired by Clark Ashton Smith's Zothique stories - or a parallel universe, if that is preferred. This scenario has details on canal boars throughout history, especially English canals.Armored Angels is set in 1920s Iraq, whilst it was under the British mandate, and sees the players going up against the Mythos with armoured cars, machine guns and aerial support - for all the good it does them. This section  has details on a Rolls-Royce armoured car and a Vickers Mark I machine gun.Along the Indus is set in India and the mode of transport is elephants, and this adventure has details on them, and how they are used.In Sleigh Ride, the transportation is a Siberian sleigh as the players hunt for an abominable snowman not that long after the end of the Russian Civil War. There are details on the USSR, the Siberian sledging system and the problems that U.S. characters have in going to countries which their government does not approve of.Automobile Chase Rules are two pages of rules for conducting, as the name suggests, automobile chases, including firearms combat from them. These can be optionally used in a game.

The Contents only displays the page numbers of the various scenarios. Given how many boxed bits of reference text there are in the supplement, this makes the contents nowhere near as useful as it could have been. The book has full colour covers - the cover painting shows an encounter between a yacht and Great Cthulhu; a bit misleading, as neither yachts nor Cthulhu feature in the book - and the interior illustrations and maps are in black and white. The illustrations range from non-player character portraits to illustrations taking from under a quarter to a full page. Most of the illustrations are relevant to the appropriate text, but there is the occasional, "filler," illustration which has nothing to do with the text - or much to do with anything at all from the looks of things. Some of the maps appear to be based on actual maps, whilst others look hand drawn. Many of the forms of transport also have plans and layouts for them. Layout is otherwise fairly standard for Call of Cthulhu supplements, with text being by far the largest component. Errors in the text are fairly minimal.

Credit: Chris Johnston/Chaosium Inc./eGDC LtdSome of the encounters can be slipped into a regular campaign - the first three are suggested as such, as these are fairly standard modes of transport. The next three are more exotic, and the final three are extremely so for the standard campaign. Consequently, the final six are specific adventures, rather than encounters on the way to something else. As is common in the game, many of these are potentially fatal.There is quite a lot of new content. Not only are there the, fairly standard, new spells and minor Mythos works, there are new skills and information related to the different modes of transport, as well as background information on the different types of transport. Whether or not these will be useful outside of their particular scenarios is another question; the last three modes of transport are pretty exotic, and it is unlikely that characters would have regular access to armoured cars and machine guns. Many of the scenarios have recommended reading sections as well as the aforementioned background information, for those that want to go into the modes of transport and settings more detail.The usefulness of the content does vary. The first three scenarios are probably the most useful, as they can be slipped into an existing campaign. The other scenarios are still quite easily usable; the problem is the amount of information provided on the various types of transport which, whilst it is interesting, has very limited long term use. Consequently, some of Fearful Passages is interesting, some is useful and some of the new rules and information aren't much use outside of the actual scenario in question. 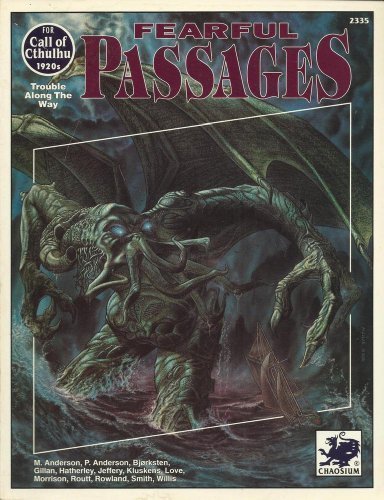