Buy GURPS Steampunk or GURPS Steam-Tech from Amazon. You too can earn money from writing articles by signing up for InfoBarrel.
InfoBarrel is a writing platform for non-fiction, reference-based, informative content. Opinions expressed by InfoBarrel writers are their own.
InfoBarrel > Entertainment > Games

GURPS Steam-Tech by William H. Stoddard and published by Steve Jackson Games is a role playing game supplement for the third edition of the company's GURPS - Generic Universal Role Playing System - game.The version reviewed is the PDF version of the supplement. Steam-Tech is currently only available in PDF from Steve Jackson Games, although there are still copies of the original printed books around. The supplement is referred to on the company site as GURPS Classic Steam-Tech, presumably because it is for the third edition of GURPS, not the current fourth edition, as the title on the PDF's cover simply says GURPS Steam-Tech.

Credit: Alex Fernandez/Steve Jackson GamesThis is a 131 page PDF, with two pages being the front and back covers, one page the front matter, two pages being the table of contents, one page being the index and one page being used for an advert. Apart from the front and rear covers, which are in colour, the rest of the book is in black and white with various illustrations, with chapter pages having full page illustrations at the beginning of them. The rest of the book consists of the Introduction and nine chapters.The Introduction gives a brief overview of GURPS and how page references to other GURPS books are handled. How tech levels, which given the variant technology of a steampunk setting can be different to those of a standard setting, are handled in this supplement is also explained, as is pricing, which can be different to normal, as well as an adventure seed. Variant tech levels have an x(+y) notation, rather than being a simple number, so 5(+1) is similar, but not the same as a tech level of 6, which is useful for comparing technology.The first chapter, Personal Weapons, covers hand weapons, firearms, explosives and energy weapons, all weapons types that are suited for personal use.Chapter 2, Clothing and Armour, also includes survival gear.Equipment contains tools, mechanical, electrical, optical and miscellaneous devices.The next chapter, Apparatus, has scientific, forensic, medical, communications and miscellaneous apparatus as well as power sources.Analytic Engines and Automata details the analytic engine, data storage and auxiliary devices (peripherals essentially, although they may not need to be connected permanently), mechanical men and automata.Vehicles has vehicles of every type, from ground and water to air to space and time, as well as control systems for them.Heavy Weapons has weapons that are too large for personal use, including artillery, explosives and energy weapons.Drugs and Chemicals has a number of different drugs, chemicals and materials, some of which are genuine.The final chapter, Living Creatures, has artificially created or unusual life forms, excluding automata, from microorganisms through plants and animals to sentient beings.

The cost of the PDF was $7.99. The PDF itself has extensive built-in bookmarks and there is a thorough index and table of contents, making this a well laid out book when it comes to navigating it. The various chapters in the book have various comparatively normal items, albeit ones that are not available in other supplements, but which are technically possible, as well as some that are definitely not standard for the 19th century Victorian Era, which are based on disproven theories, such as the ether or N-Rays, or were possible but not actually produced during that period.Each item's description has an, often entertaining, introductory section, which includes things such as an advert for the item to personal journal excerpts to news items. This is then followed by more specific, game-related details on the item in question and then the actual item details, which follow the standard GURPS layout for items or, in relevant cases, people. Some of the "technology" described are beings that could, in fact, be used by players as character races.There are no sidebars in this book, such as would be seen in GURPS setting and genre books, although there are a few segments that serve a similar purpose that are used to add colour to the descriptions. There are some references to other GURPS supplements, primarily GURPS Steampunk, but also a handful of others such as Vehicles and Robots, although nowhere near as many as can be found in some other GURPS books.This is definitely not a standalone supplement, nor a setting or genre book like the majority of GURPS supplements, but it is not described as such; instead it is a tech book full of gadgets that is most suited as a companion book for GURPS Steampunk. Its subtitle is "A Compendium of Marvellous Devices for the Age of Steam." There are a handful of adventure seeds throughout the book, but only a handful. GURPS Steam-Tech contains many gadgets that are useful for any steampunk setting, not just one using GURPS Steampunk, but it will need adapting for it to be used with other systems. 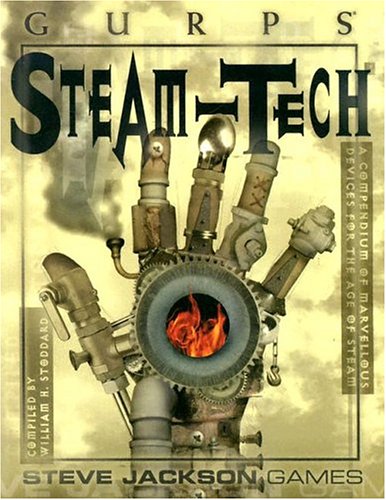 GURPS Steam-Tech: A Compendium of Marvellous Devices for the Age of Steam Amazon Price: $49.99 Buy Now(price as of Aug 31, 2015)
Next >> No Man's Sky - How to Efficiently Farm Money