Buy GURPS Steampunk or GURPS Steam-Tech from Amazon. You too can earn money from writing articles by signing up for InfoBarrel.
InfoBarrel is a writing platform for non-fiction, reference-based, informative content. Opinions expressed by InfoBarrel writers are their own.
InfoBarrel > Entertainment > Games

GURPS Steampunk by William H. Stoddard and published by Steve Jackson Games is a role playing game supplement for the company's GURPS - Generic Universal Role Playing System - and is designed for the third edition of the game.The version reviewed here is the PDF version of the supplement, which is currently only available in PDF from Steve Jackson Games, although copies of the original printed book can still be picked up, and the PDF is referred to as GURPS Classic Steampunk, even though the title on the book is just GURPS Steampunk. This is presumably because it is for the prior, 3rd, edition of GURPS, rather than the current 4th Edition. This is a 147 page PDF, two pages of which are the full colour front and back covers, one page is the front matter, two pages are the Table of Contents, one page is an advert, one page an index, one page a bibliography, one page a glossary and one page is the Introduction. The remainder of the supplement is the nine main chapters. The front and back covers of the supplement, as well as the advert, are all in colour, but the rest of the book only has black and white illustrations throughout it.The Introduction has a section about GURPS itself, and how to interpret the page references used through the book, which refer to other supplements in the GURPS range, and a brief overview of what steampunk in general and GURPS Steampunk in particular is.

Credit: Alan Gutierrez/Steve Jackson GamesThe first chapter, The Steampunk Genre, as its name suggests, covers the genre of steampunk and in more detail than the brief overview in the Introduction. How technology is handled in the book, including alternative and weird technology - steampunk does not in general follow the typical path of technology, and some of the tech covered is not actually possible, but uses obsolete science or simply wouldn't work - as well as using steampunk outside the 19th century, and in other GURPS settings.Chapter 2, The Spirit of the Age, is largely factual based, on actual 19th century technology and knowledge of the world. Warfare of the century, politics and social classes are also covered. One common element of this chapter is What If? where possibilities are explored as to how things would be if matters had worked differently.The next chapter, Characters, includes various character templates in the standard GURPS pattern, social classes, money, advantages and skills. There is a small section on using characters from the period, both real and fictional, with one NPC presented in detail, Captain Nemo.Matters of Life and Death covers warfare, both civilised and colonial, and the Great Game - espionage between the Great Powers. Crime and investigating it and the state of medicine and healing are detailed, and there is an explanation as to why a book based on science fiction has so many rules on actual technology of the Victorian Era.The chapter Marvellous Inventions gets around to technology in more detail. How inventors can create their inventions, new materials, supplying power and actual equipment, some genuine, some, like the difference and analytical engines, possible but not created. Also included are personal equipment, weapons and chemicals.Weird Science is based on the technology that never happened because it wasn't possible and disobeys the laws of physics. Antigravity, the luminiferous ether, advanced biology and psychical research, and a brief covering of magic, are all in this chapter.The Grand Tour covers the Earth of the real 19th century, describing the major power, the British Empire, together with other countries and continents, and the problems with travel. There are also brief overviews of the other planets, at least as they were believed to exist at that time.The final chapter, Steampunk Campaigns, covers how to run steampunk campaigns, as the chapter title suggests, and also describes four alternate worlds, all rather different to that described in The Grand Tour, with some adventure seeds for them, and how to run cross-genre campaigns with some suggestions listed.

The cost of the PDF was $7.99. There is an extensive table of contents at the front and a detailed index at the rear, and the PDF itself is well bookmarked, making this one of the easier supplements to navigate. The book is laid out like most other GURPS supplements with sidebars on many of the pages that provide further information and matters of interest.There is a strong British, indeed, Victorian, feel to the supplement, which is not surprising as it is largely based in the 19th century, although it would be an alternative version of such, which was the Victorian Age and was dominated by the British Empire for much of the period. The primary examples of non-Victorian Era material are in the final chapter, with the alternate worlds depicted.There are a lot of references to other supplements throughout, and not just the core rulebooks - which refer to the 3rd Edition rules, so may well be inaccurate for the 4th edition books - but many of the other different supplements in the GURPS line, and there are a lot of them, even before the suggestions towards the rear for supplements to use in cross-genre campaigns. Some of these references are quite minor, such as one or two suggestions of things to look up in them, whilst others are quite frequent, especially for the more generic GURPS supplements, such as GURPS Magic and Who's Who 1 and 2. One useful supplement that isn't referenced - probably because it was published afterwards - is the effective companion tech book, GURPS Steam-Tech.Unlike some steampunk supplements, there is very little reference to magic, as magic is not necessarily a part of every GURPS setting. When magic is referred to, it mostly references the standard GURPS magic system, primarily GURPS Magic, but also GURPS Grimoire and GURPS Voodoo, and suggests how the standard magic system could work in a steampunk setting, but GameMasters wanting to use magic in their setting will need to get another supplement in order to do so; those who normally use the GURPS system are likely to have one of the suggested books. This supplement instead focuses more on the technological aspects of steampunk.GURPS Steampunk is not a complete game system in itself, but the GURPS supplements of this type or not intended to be; they are intended to be used with the generic GURPS system. One disadvantage that this supplement has - and this is common to the entire GURPS line - is the lack of adventures. There are a handful of adventure seeds in the back, but they are all set on different worlds to that described in the rest of the supplement. To run a campaign, it would be necessary to either adapt material from other systems - or vice versa - or for the GameMaster to create the material themselves, which is not always possible from a time point of view. However, given that all GURPS supplements are cross-compatible, if it is known how to convert one GURPS supplement to or from another system, it is known how to convert them all.There are references to different campaign styles, from realistic to cinematic - or make-it-up - in the book, allowing anything from a slightly different but plausible alternative history to one that could never have happened no matter what.Like most GURPS supplements, GURPS Steampunk is a pleasure to read, based on what looks to be quite extensive research, going by the Bibliography, and it is an award-winning supplement. Using the material in it may be a bit trickier, and it is mostly suited to using in an alternate version of Earth, even though there is information provided on using it in other settings. GURPS Steampunk is one of the best steampunk supplements around and if nothing else is certainly useful as a source of ideas and inspiration. 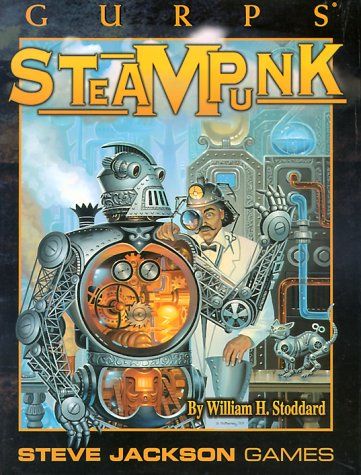