Buy the Guidebook to the City of Dolmvay or the Chronicles of Amherth adventure bundle. You too can earn money from writing articles by signing up for InfoBarrel.
InfoBarrel is a writing platform for non-fiction, reference-based, informative content. Opinions expressed by InfoBarrel writers are their own.
InfoBarrel > Entertainment > Games

A Review of the Role Playing Game Supplement Guidebook to the City of Dolmvay by Peter C. Spahn

Guidebook to the City of Dolmvay by Peter C. Spahn is a role playing game supplement and city book published by Small Niche Games and is part of their Chronicles of Amherth setting. Amherth is a low magic setting. The supplement was funded through a successful Kickstarter campaign.The book, and the setting, use the Labyrinth Lord rules system published by Goblinoid Games, which emulates the old-fashioned Dungeons & Dragons game, in particular the 1981 Basic Set, and published under the Open Gaming License, and is described as a retro-clone.[1] Consequently, much of the guidebook is Open Gaming Content.[2] Labyrinth Lord games, also run by a Labyrinth Lord (which is a similar title to the old one of Dungeon Master), have the feel of old-style gaming.

Credit: Small Niche Games/David GriffinWhen purchased, it was only available as a PDF, but a softcover hardcopy is now available, as well as a special edition which is a hardcover version. Both the PDF and the hardcopy versions are in black and white with a colour cover, with a number of black and white illustrations throughout. This is a 220 page supplement. It is not divided into numbered chapters, but it is divided into sections. The PDF includes bookmarks, making it easy to find the relevant sections in the book, there is a comprehensive Table of Contents and a reasonably substantial index at the rear.The PDF, hardcover and softcover are classed as different products, rather than being variations of the same as is normally the case. This may be because the PDF is available as "Pay What You Want" which means it can be acquired for free, but the purchaser can instead pay what they think it is worth. This needs doing before the book is purchased, not after, and the reason for it being published at this "price" is probably due in this case to the money to develop it being raised through the Kickstarter project.The Introduction gives a brief overview of the Amherth setting, the feel of Dolmvay, Open Game Content and how to use the book in general. This is quite a short section.Adventuring in Dolmvay has a brief mention of the Adventurer's Guild, which is discussed in detail in Appendix II, some notable companies of adventurers, although they have no stats provided in this section, and some adventure themes.Ancient History describes the history of Amherth and the City of Dolmvay, as well as its' predecessor which was known as Vary.The City of Dolmvay section covers the aspects of running the city, including crime and punishment, government, religion and commerce. This part of the book also includes a couple of major subsections; Calendar, which describes a lot of festivals celebrated in the city and Citizens of Dolmvay, which describes the citizens including behaviour, slang, rumours and gossip. The rumours and gossip section has a lot of ideas that can be further developed.

Credit: Small Niche Games/Tim HartinCity Layout describes the city itself. There is an overview of the city's architecture and residences, as well as examples of the City Watch, then a black and white map of the entire city. The rest of this section breaks the city down into different areas, in each giving a brief overview to get the feel of what is in it and then descriptions of notable places and NPCs, factions and organisations in these areasCommon Shops and Businesses covers each type of shop or business that could be found in the city in alphabetical order by profession or business, describing what services they provide and what could be seen in such a business.Taverns and Inns describes food and drink and its quality, as well as a method of creating them. It also has twelve named examples of taverns and inns and describes them in the discussed manner. There are other taverns and inns described in the City Layout section.Random City Encounters has a small table of stock encounters followed by more detailed encounters which are broken down into various districts of the city.New Flora and Fauna covers new types of plants and monsters that can be encountered in, below and outside the city.Appendix I: The Valenon covers the organisation of the Church of Law and Order who rule the Valenon, a city-state within the city. Some NPCs, factions - such as religious orders - and items related to the Church are also in this section.With the Labyrinth Lord system being based on older Dungeons & Dragons, it only uses Lawful, Neutral and Chaotic alignments, unlike the later versions which included Good and Evil as well.Appendix II: Adventurer's Guild covers the Adventurer's Guild of Dolmvay, including maps of the island it is on and the various buildings, as well as the benefits, costs and services available, including the Guild's major NPCs.Appendix III: Sewers of Dolmvay, rather than mapping the sewers in detail, instead provides a means of creating your own. The sewers are in multiple levels, and this section describes the various constructions and areas that can be found in these, followed by encounters. As with the city encounters, these are divided into a small table of stock encounters followed by more detailed ones broken into the various sewer levels. The section concludes with seven pages of map sections, with three sections on all but the last page, which only has two, that can be used to construct your own sewer system.Appendix IV consists of random tables for creating Non-Player Characters, including their traits, quirks, professions and names, as well as methods for handling 0-level humans and demi-humans.Appendix V covers Treasures, and this is done using more random tables that can be used to create valuable personal professions as well as valuable household items. There is also a consistent method of handling pickpocketing, whether done by players or NPC thieves.Finally, the book ends with the Open Game Content section, including the Designation of Product Identity.

Guidebook to the City of Dolmvay in Review

The supplement does not by any means cover every single detail and building in the city. There is plenty of room for a Games Master (or Labyrinth Lord, to use the systems terminology) to add their own content, and the publisher encourages people to publish their own supplements set in the city, although those that use terminology covered in the Designation of Product Identity must contact the publishers, Small Niche Games, for a free commercial license. The success of the Kickstarter campaign resulted in the finished supplement being bigger than was originally hoped - it more than doubled in size.[3]The city's Sewers are an interesting concept. Sewers are a common enough idea in places that adventurers visit in role playing games, but having ancient, magical sewers whose layout constantly changes with lots of weird machinery in them is a bit of a twist.There are a number of references to Small Niche Games' Chronicles of Amherth setting in the book, and to other Labyrinth Lord supplements published by SNG, as well as some that have been released by other publishers. The various NPC stats given in the book are of course done for the Labyrinth Lord, but it should be relatively easy to transfer the city to another setting and to convert the relevant stats to another system, but it should be remembered that this is a low-level, low-magic setting, so that may not translate as well.The city map would be better in colour, and it would also be better bigger, as it is a bit cramped in the book. A possible idea would be to release a colour city-map poster. Having an enlarged view of the relevant portion of the map in each section of the book where that area or district was covered, with the various described buildings marked on the map, would also be useful or, alternatively, doing that as part of the suggested map supplement.Being available for free, the supplement is definitely very good value for money, and it is definitely worth more than that. The Guidebook to the City of Dolmvay is definitely recommended as a good city setting. 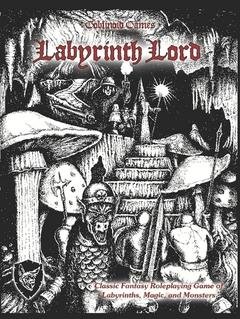