Buy Holiday Essentials from RPGNow or find more GM Mastery products. You too can earn money from writing articles by signing up for InfoBarrel.
InfoBarrel is a writing platform for non-fiction, reference-based, informative content. Opinions expressed by InfoBarrel writers are their own.
InfoBarrel > Entertainment > Games

GM Mastery: Holiday Essentials by John Simcoe and Johnn Four is a role playing game supplement and the second book in the GM Mastery range, which is published by Roleplaying Tips. This supplement is designed for the d20 System and relates to designing holidays and integrating them properly into a campaign, so that they fit rather than seeming to be an afterthought. Most campaigns have holidays - and this is a broad term in this case - but this covers building better ones from scratch. There are different levels of design, from incidental to background flavour to building encounters around holidays to using holidays as the basis for full adventures.The supplement is only available from RPGNow as a 66 page PDF which has a colour cover and some black and white illustrations inside. As it is designed for the d20 System, some elements of the book are covered by the Open Game License and are designated as Open Gaming Content.[1]

Credit: James MatherThe book contains four chapters and an Introduction. The Introduction is a single page describing how to use the book, and what uses it has. Chapter 1: How to Design Compelling Holidays covers, as the name suggests, designing holidays. There are different reasons why these might be designed, and these require different levels of detail, depending on their role. The chapter covers the various details that should be covered in the design of a holiday, which are also summed up in a table at the end of the chapter, summarising the holiday's role and which elements should be included for each holiday type. The aim is to develop a holiday that is interesting and adds something to the campaign setting, even if it is only one developed to a brief overview.Chapter 2: Holiday Design Elements expands on some of the elements covered in chapter 1, with further details on  what the holiday will consist of provided, and suggestions on how to develop the elements. The overall feel of the holiday - it does not need to be happy or a celebration - and its role is also covered. How to design the history of the holiday and how it came about are additional details included.Chapter 3: GM & Campaign Advice covers the practical side for how a Games Master (GM) can handle the paperwork, whether real or virtual, of a holiday, and how to make sure it is included in a campaign at the appropriate point every time it comes around. Included in this section are examples of how the relevant details for a holiday can be recorded, and different methods of doing so.Chapter 4: Holiday Example is an example of a holiday and its effects. The example described is a more serious recurring event, rather than a celebration. It covers the various design elements covered in the initial chapters, and shows how it can fit into the world. This is a more fully described holiday which can be used as the basis of encounters and adventures.

The main index of the book is of limited use, especially as the fourth chapter is not even mentioned in it, as it comprises of just chapter titles and a brief overview of the first three chapters. The PDF has built-in bookmarks, though, which makes navigation much easier, unless, of course, it is printed out.As mentioned earlier, holidays are a common feature in many RPG settings. This book provides a method of better integrating this common idea into a campaign. These do not need to be just a celebration or a day of leisure, as there are many different things that can be done, including festivals and, like the example in Chapter 4, a regularly occurring event that has led to an entire "holiday" being developed by the world to deal with it. Using this book an entire, thoroughly detailed (right down to the decorations and food if needed) holiday can be completely designed, and in such a way that it nicely fits into an existing setting. Chapter 4 can be read as a step-by-step example of how to do a design, or it could even be added to an existing world with a bit of tweaking.Although the book may, in theory, be aimed specifically at the d20 System, there is nothing in the book that is truly specific to that, as there are no stats of anything included, whether non-player characters, magic or other items, so it is really more system-agnostic than anything. It is also aimed at a fantasy setting but, again, there is nothing to stop it from being used in other settings. All settings have holidays, and they all can be further developed.Holiday Essentials is therefore a useful guide for better developing a common fictional theme, the holiday, that can provide value and add depth to any campaign setting, for any genre or any system, enabling entire adventures to be built around a regular occurrence. 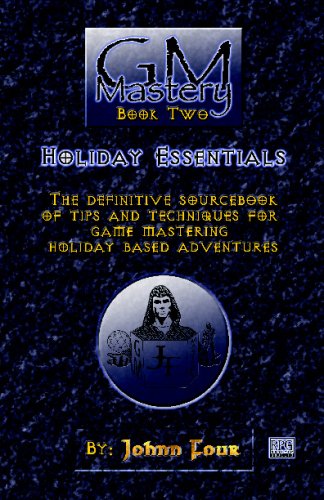