Get the PDF of Horror on the Orient Express from RPGNow or the print version from Amazon. You too can earn money from writing articles by signing up for InfoBarrel.
InfoBarrel is a writing platform for non-fiction, reference-based, informative content. Opinions expressed by InfoBarrel writers are their own.
InfoBarrel > Entertainment > Games

Horror on the Orient Express is a role playing game supplement published by Chaosium Inc. for use with their Call of Cthulhu horror role playing game based on the works of H. P. Lovecraft. This is a large campaign that crosses many European countries during the early 1920s.

Credit: Chaosium Inc./Lee Gibbons/eGDC LtdThe supplement was originally published as a boxed set, which is what was reviewed, but it is also available as a collection of PDFs for $59.97 from RPGNow, with the numbered books also being available as epub, mobi and prc; a collection because the supplement consists of many different parts. This isn't merely a digital version of the original edition; the entire campaign has been revamped since the original publication, and there is more material than in the original set, as well as more colour material than there was originally. This new edition is also available in print format, although this tends to be pricier, usually around $120.

Book I: Campaign Book has 24 numbered pages but the booklet is actually 32 pages long. Of the additional eight pages, one is the front cover, three pages are the front matter, two pages are the Expanded Table of Contents, one page is news headlines from early 1923, when the campaign is set, and the rear cover is a 1920s Investigator Sheet. The Expanded Table of Contents is the contents for all three main books in the supplement. This booklet has background and history of the Orient Express and the Simplon-Orient Express, including the staff, cars and locomotive, as well as a brief description of the various stages of the players' journey. Suggested fiction and factual reading and viewing material is also given.Book I also has a summary of the entire campaign, some details on the major players (they are covered in more detail later, when appropriate) and how to run the campaign. There is also an extensive section entitled A Continent of Horrors, which gives some horror examples, including works of fiction, for many of the European countries, both those visited or passed through during the campaign (which are indicated) and many which aren't.

Book II: Through the Alps is the first book of the actual campaign. The first numbered page is 27, although there is the cover and one page of writing before this, as the page numbers continue from Book I. This booklet actually has 64 pages, of which one page is the front cover, one page a black and white illustration of La Galleria Vitorio Emanuelle in Milan (visited during the campaign) and two pages for Keeper's Entries, namely notes, characters, subplots and the like that the person running the campaign can make notes on.The campaign starts in London, and there are clues to a subplot that is actually unrelated to the main campaign. The campaign continues to Paris, then Lausanne and finally ends, in this book, in Milan. There are a number of side journeys from the main places, including an excursion into a dreamworld (which is not, as it repeatedly pointed out, part of the Dreamlands). For each locale, there are notes on it.

Book III: Italy & Beyond is the second campaign book, and its first numbered page is 87, with again both a page of writing and the cover before that. Again, the page numbers continue from the previous book. Book III is another 64 page booklet, and one page is the front cover, the rear page just has a symbol with the supplement's name in it and there are another two pages for Keeper's Entries.The campaign continues in Italy, this time in Venice, then on to Trieste, followed by an extremely dangerous dream interlude, then on the Belgrade. A notable encounter in this book is with the being from Slavic mythology, Baba Yaga.

Book IV: Constantinople & Beyond is the concluding book of the campaign, with the first numbered page of 147, with again a page of writing and the cover before it. The page numbers once more continue in this book. This is another 64 page booklet, with one page being the cover, the rear page having the same emblem as on the rear of Book III and there being another two pages for Keeper's Entries.This book sees the players travel to Constantinople in Turkey, with a major confrontation, before it rushes on the Simplon-Orient Express all the way back to London, with major confrontations on the train itself, with potential, and definite, confrontations with various powers the players met on the route.

This collates and duplicates all the Player Handouts from the various Keeper's booklets in one place. This is a 32 page booklet, but there are many blank pages. One page is the front cover, one page How to Use This Booklet and an index to the handouts divided by major city. The rear cover has a scheduled for the Direct-Orient Express, and the inside rear cover is blank. There are 14 pages of player handouts, printed on one side only, with the rear of each being blank. These handouts can therefore be cut up and given to the players.

Credit: Chaosium Inc.Strangers on the Train

This is a loose-leaf 32 page sheaf of non-player characters. One page is the front cover and one the rear. Inside the rear cover is a list entitled Famous Faces Abroad, which lists various real people who could be met divided into time periods. The inside front cover details the purposes of the booklet, which is to provide people as scenery that can be met on the train, and lists them. The remaining pages detail the NPCs; most pages have two characters, unless there is a couple, with the rear of the page having details of any entourage that's with them and room for Keeper Entries.

Credit: Chaosium Inc./eGDC LtdAs well as the books and booklets, there are plenty of other items provided in the box, to add character and depth to the play.Routes of the Orient Express - A fold-out map approximately A2 in size.Passports - Four blank United States passports, on individual A4 sheets, modelled on the actual passport used at the time.Luggage Stickers - Two small coloured luggage stickers with adhesive backs.

Credit: Chaosium Inc./eGDC LtdScroll of the Head - An A3 player handout that can be separated into the different pieces on the sheet.Sedefkar Simulacrum - An A3 card that can be cut into the various parts of the Simulacrum that are found.

Credit: Chaosium Inc./Gustaf Bjorksten/eGDC LtdTrain Car Plan - Four A3 card sheets, each bearing six different plans of train cars, that can be cut up and used to assemble a train (these train car plans are reused in Fearful Passages).Period Poster - An A3 colour poster reproducing an actual Orient Express poster of the period.

Horror on the Orient Express in Review

The Expanded Table of Contents covers pretty much everything in Books I to IV, giving a much greater level of detail than is typical in Call of Cthulhu supplements, but it does have some problems. Unfortunately, the pages in the contents aren't always in numerical order. For example, the section on Fenalik in Book I is page 18, but it is listed in the contents after The Sedefkar Simulacrum, which is on page 22. Another is that the Expanded Table of Contents is only in Book I; should it need to be referred to in the other books, Book I will be needed as well, partly defeating the purpose of separating the whole campaign out into smaller booklets. The contents are still much more thorough than the majority of Call of Cthulhu supplements though.The illustration on the box is in colour, but the illustrations inside, which include portraits of non player characters, larger illustrations relevant to the nearby text, building plans and maps, the latter including actual historical maps of cities from the time period, are in black and white. As is common in Call of Cthulhu, the booklets are very text-heavy, so there is a lot of material.The quality of the different small booklets is inferior to that of the standalone supplements, as they lack the card covers, and the paper quality also looks poorer. This is undoubtedly due to the fact that they come in a cardboard box, which offers a measure of protection to the booklets that they would otherwise lack. Once removed from the box, they are, of course, much easier to damage. This box is made from quite thin cardboard, which is substantially inferior to the boxed supplements that were regularly being produced by TSR, the industry leader, at the time, but these box sets were apparently losing money for TSR with every sale, something that contributed to the decline of the company and its takeover by Wizards of the Coast. Some of the interior text also looks "smudged" where it has double printed, making it harder to read, and the ink itself smudges fairly easily. These quality issues are largely irrelevant for those who purchase the new edition electronic version, or probably the new print version too.The campaign is set rather earlier in the 1920s than is usual for Call of Cthulhu supplements, in 1923, whilst most are at the tail end of the decade, rather than at the beginning. The date could be adjusted, but some changes would need to be made, in order to maintain historical accuracy where appropriate; for one thing, the Blackshirts in Italy, dangerous as they are, were probably more dangerous later in the decade. There were other political changes in some of the countries during the period; Turkey, for instance, which is where the Simplon-Orient Express terminates, is still being constructed as a country from the remnants of the Ottoman Empire. This campaign is therefore easiest to run during the intended time period.There was apparently a 70% fatality rate for characters during playtesting, which is high even for the game system. Call of Cthulhu has never been a suitable system for players to get attached to their characters; many will die, often quite horribly, or merely go totally insane, over the course of this campaign.Rather unusually for a Call of Cthulhu scenario, one of the primary antagonists is a vampire. These are covered in the rules, but they are more a Gothic horror antagonist (or, in modern literature, love interest) than a Lovecraftian one. Possibly because the Lovecraftian themes are of cosmic, incomprehensible horror, and the motivations of vampires tend to be far more understandableThe boxed set has a lot of material in the various extras, which will add flavour to the game play. This is quite a pricy supplement, but there is a lot in it - this is not simply a single evening's worth of game play, but probably actual days worth. The second edition, the PDF (and other format) collection, sees Books I-IV very nearly quadruple in total page count, added other material, updated it with errata and added a further six scenarios. The original edition was good value for money; the new edition is even better. Whether print or digital is purchased will largely depend on budget, as there is a significant difference in price. Horror on the Orient Express is a truly stupendous Call of Cthulhu adventure, no matter which edition is chosen, and is a must-buy for fans of the system, with many, many hours of lethal gameplay. 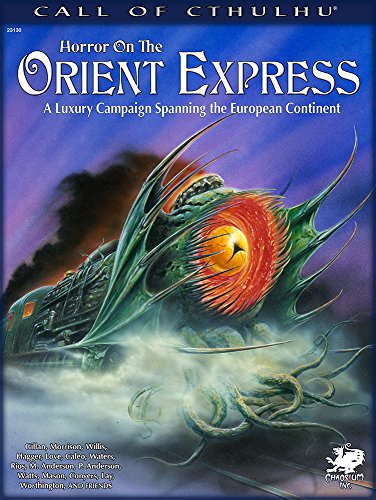 Horror on the Orient Express: A Luxury Campaign Spanning the European Continent (Call of Cthulhu roleplaying) Amazon Price: $119.95 $86.00 Buy Now(price as of Nov 30, 2016)
Next >> No Man's Sky - How to Efficiently Farm Money