Get the original Keeper's Compendium from Amazon or the updated PDF or PoD version, The Keeper's Companion, Vol 1. You too can earn money from writing articles by signing up for InfoBarrel.
InfoBarrel is a writing platform for non-fiction, reference-based, informative content. Opinions expressed by InfoBarrel writers are their own.
InfoBarrel > Entertainment > Games

Keeper's Compendium: Blasphemous Knowledge & Forbidden Secrets by Keith Herber and published by Chaosium Inc. is a role playing game supplement for the company's Call of Cthulhu horror role playing game based on the works of H. P. Lovecraft.The version reviewed is the printed softcover book. The supplement is not currently available in either PDF or new print, but existing copies can still be obtained. It is unlikely that it will be released as a PDF in the future, as the contents were augmented and, together with new material, formed part of the later publication, The Keeper's Companion, Vol 1, which is currently available in both PDF and print on demand from RPGNow..

Credit: Charlie Krank/Chaosium Inc./eGDC LtdKeeper's Compendium is a perfect bound softcover book with 78 numbered pages. Five of these are front matter, table of contents and the Introduction and there are a there are two unnumbered pages of product catalogue. There are some black and white illustrations inside, and the colours are nominally in colour, but only black, white and red are used. The supplement is divided into four main sections.Forbidden Books is the first section and is getting on for half the supplement. The majority of this section covers 24 Mythos books, more if the different versions of some of the tomes are counted, giving more detail on the various standard Mythos tomes. There is also a two page essay, A Brief History of the Written Word, and one page of New Mythos Tomes, which has another 40 books. These are all books that had been mentioned in the works of H. P. Lovecraft and others, some of which have also been covered in other supplements, but not in the main rules. They are, unfortunately, not covered in anywhere near the same level of detail that the previous tomes were.The next section, Secret Cults, gives descriptions of eight mythos-related cults, including some histories, beliefs and non-player characters. This section also has also has some details on new mythos writings, as well as some new spells. Concluding the section is one page of The Thurston Papers, a collection of writings related to Lovecraft's The Call of Cthulhu and having been written by several people who survived that story.

Credit: Charlie Krank/Chaosium Inc./eGDC LtdAlien Races describes the aims, values and goals of seven alien races, or at least nonhuman, races that are considered to be relatively close to humankind. Relatively close in that their aims are reasonably understandable, rather than being completely alien, although the races themselves may not look even remotely like humans; however, some are definitely related.The final section, Mysterious Places, covers fourteen places, including the most well known sunken continents, lost lands and cities, with the final entry, Yuggoth and Beyond, not simply covering one place, but seven different ones including Yuggoth and other stars.

The table of contents is actually more useful than that of many Call of Cthulhu supplements, as many of the entries are listed in it, but it is still not as helpful as it could be, as there are various additional entries which would be helpful to have indexed. There is no overall index, as is also common. As a result, the navigation of the book is not as easy as it could be.The art in the book is all black and white, and there are a number of illustrations, many, but not all, relating to the nearby text; there are probably more illustrations than is typical for a Call of Cthulhu supplement, although there aren't any maps or NPC images in this one. The supplement still contains a lot of text.

Credit: Les Brooks/Chaosium Inc./eGDC LtdThe expansion of the details of the regular Mythos books, which includes translations and, in some cases, their original alien or pre-historic form, greatly adds depth to them. It's a shame that the listing of books at the end of the section only has a few details on them, rather than the same, expanded details, but this would have significantly increased the size of the section. The essay, A Brief History of the Written Word is an interesting exploration of the different types of "books" that would have been available through the years.For the next three sections, Secret Cults, Alien Races and Mysterious Places, the details on the various mysterious items covered is of interest, but is not truly significant. Some new information is given, but not enough to be truly useful in-game without further expansion. Many of these are covered in more detail in other supplements, although having this information is interesting, and there are some new spells, monster details and Mythos writings that will be useful as-is.Although the Keeper's Compendium is primarily designed for Call of Cthulhu, it could still be useful for other, similar Lovecraftian settings, even those which do not use Basic Role Playing, or derivatives, as their game system, but modification would need making to the game stats in such cases. Keeper's Compendium is not a location supplement, nor is it an adventure book, it is a collection of interesting items in one place, and some expansion of existing ones, that does have the ability to add depth to a game. 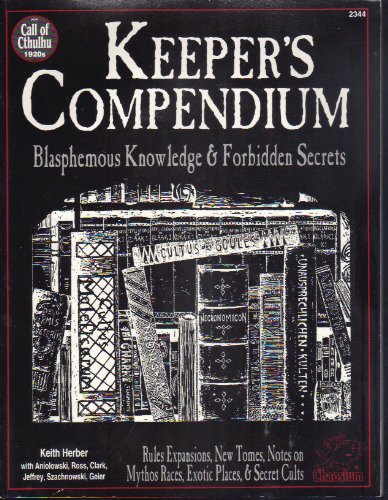 Keeper's Compendium: Blasphemous Knowledge & Forbidden Secrets Amazon Price: $12.95 Buy Now(price as of May 31, 2016)
Next >> No Man's Sky - How to Efficiently Farm Money