A Review of the Role Playing Game Supplement Kingsport: The City in the Mists by Kevin A. Ross

Kingsport: The City in the Mists by Kevin A. Ross is a role playing game supplement published by Chaosium Inc. for use with the Call of Cthulhu horror role playing game based on the works of H. P. Lovecraft, and set in the 1920s. Kingsport was the third supplement published in the Lovecraft Country series, covering Lovecraft's Massachusetts. The preceding two were Arkham Unveiled and Return to Dunwich. This supplement covers the fictional town of Kingsport, which was the setting for Lovecraft's stories The Terrible Old Man, The Festival and Strange High House in the Mist, and was in addition mentioned in a number of other stories. The time period is nominally set in 1928, after the events of the three stories set in the town. Kingsport is located only a few miles from Arkham at the mouth of the Miskatonic River and was inspired by the real town of Marblehead, Massachusetts.

Credit: John T. Snyder/Chaosium Inc./eGDC LtdKingsport is not currently available new, either in print or as a PDF, but there are PDFs of other supplements in the series available on RPGNow, so this one too could see its rerelease as a PDF at some point; however, it was rereleased as H.P. Lovecraft's Kingsport, so a PDF of the later version is more likely. The book is perfect bound and has 123 numbered pages long, with another five pages consisting of front matter, the table of contents and the Introduction. Eight of the numbered pages are Player Handouts, which are for the various scenarios and also includes a tourist brochure for the city. There are two fold out maps of the city; an approximately A3 labelled street plan with a town directory on the reverse and an approximately A2 player map, dated 1922, which just shows the street names. The book lacks a typical chapter structure.Welcome to Kingsport gives a brief overview of the people, government, housing and employment opportunities in Kingsport.A Town History gives the history of the town from its founding, and what drives the modern day (for the 1920s) economy, which is mostly tourism and fishing.

Credit: John T. Snyder/Chaosium Inc./eGDC LtdThe Kingsport Cult gives a history of the Mythos cult that worshipped Tulzscha, the Green Flame, the entity from H. P. Lovecraft's story The Festival. There is also a section covering the relationship of the town with dreams.A Kingsport Chronology is a one page timeline of the important events in Kingsport's history - from an investigators standpoint, anyway; some of these won't be common knowledge - from 1639 to 1928.A Guidebook to Kingsport & Environs covers the city itself, which takes up more than a third of the supplement.  There is an overview map of the city showing the neighbourhoods, then sections describing the seven neighbourhoods within the town and one covering the surrounding area. Each of these areas has a labelled map to accompany the text, showing the covered buildings. Kingsport Head, the setting of Lovecraft's tale Strange High House in the Mist, is also detailed at the end of the section, covering the Strange High House and some other areas of interest.Plagued by Dreams is a curious essay on handling dreams in games, which seems a bit disconnected from the rest of the book, even though Kingsport is known for dreaming and two of the scenarios are dream-based.The final section, Scenarios, has three adventures set in Kingsport, two of which are dream based.

Kingsport: The City in the Mists in Review

The Table of Contents is not as useful as it could be, covering only some of the major sections, nor is it that consistent - some new weapons are listed in the contents, whilst others are not. The book also lacks an overall index. Given that this is a town guidebook, not just a scenario book, an index would have been appreciated, as it would have made finding particular characters and locations, as well as other items of content, far easier than is currently the case.There are a number of new skills, weapons and spells, as well as Mythos books and a new profession, Artist. Most of these are in the section, A Guidebook to Kingsport & Environs. That section is one of the major portions of the book; the other being the three scenarios at the end.

Credit: John T. Snyder/Carol Triplett/Chaosium Inc./eGDC LtdKingsport being a town with lots of inhabitants, there are many different NPCs covered, with varying levels of detail given for their stats, depending on how the players are likely to interact with them. Some of the NPCs may be friendly, or useful; others may be potential foes. This makes it useful for using the city as an adventuring base, as there are many possible interactions. Some of the NPCs have various back stories that could be used as stepping points to other adventures, or to help in the provided ones.The illustrations in the book are in black and white, and there are not that many of them, with the majority being the faces of various non player characters who can be encountered in the town. There are a few full or half page illustrations depicting scenes of relevance to the accompanying text, as well as some maps. The supplement is mostly text. The front and back covers are in colour. This is all fairly typical for Call of Cthulhu supplements published at this time.

Credit: Gus Duzerega/Chaosium Inc./eGDC LtdKingsport is not that easy to adapt to other time periods. Some details are given as to what will happen in the next few years, following the 1928 nominal date; primarily, what businesses will fold during the Great Depression. It could possibly be used in either a modern or Victorian campaign, but substantial changes would need to be made to allow the major changes in technology; even the 1920s are significantly different from the Victorian era when it comes to technology, and the difference between then and the modern era is even greater.Kingsport also isn't really suitable to be dropped in or used with other settings, as it is quite tied to the United States, and the rest of the world, although this might be possible; again, this would require quite a bit of work. Call of Cthulhu uses Chaosium's Basic Role Playing system as a base, which is in many ways a comparatively simple system, so it could potentially be adapted to other role playing game systems, especially those also based on BRP. Any system that lacks the sanity-damaging aspects of CoC will lose some of the flavour of the supplement. However, Kingsport: The City in the Mists is a useful, text heavy supplement for adventuring in H. P. Lovecraft's Massachusetts, and is definitely recommended for campaigns situated there in the 1920s, especially in conjunction with the other supplements in the Lovecraft Country series. 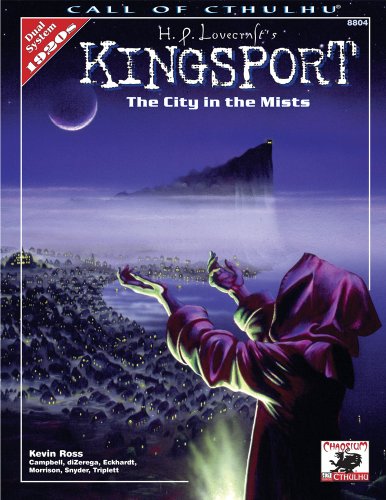