Buy Mansions of Madness from RPGNow or from Amazon. You too can earn money from writing articles by signing up for InfoBarrel.
InfoBarrel is a writing platform for non-fiction, reference-based, informative content. Opinions expressed by InfoBarrel writers are their own.
InfoBarrel > Entertainment > Games

A Review of the Role Playing Game Supplement Mansions of Madness

Mansions of Madness by Fred Behrendt, Michael DeWolfe, Keith Herber, Wesley Martin and Mark Morrison is a role playing game supplement published by Chaosium Inc. for use with their Call of Cthulhu game based on the works of H. P. Lovecraft. The supplement is a collection of five scenarios set in the 1920s, three of which are set in New England, one of them is set in South Carolina and one has no definite location. The theme of this supplement is adventures that are set around a particular place, the "Mansion" of the title, although how much of a role any particular place does play varies from scenario to scenario.The supplement is available as a watermarked PDF for $12.95 from RPGNow, as well as a softcover print on demand book for $21.95, and a bundle containing both the print on demand book and PDF for $25.95. Copies of the original printed book can still be found. The version reviewed is the original printing. The book has 128 pages, of which four pages are the front matter and Contents, one page is the Expanded Contents and there are fourteen pages at the end which comprise the Handouts Section, which duplicate the various player handouts found throughout the supplement, with each page being printed on only one side.

Credit: Chaosium Inc./Lee GibbonsThe first adventure, Mr. Corbitt, is not given a particular location, just a general idea as to the type of neighbourhood it would be suitable for, which does allow it to be placed in a convenient location. The titular Mr. Corbitt is a neighbour of one of the players, and after witnessing him moving what looked like a body part, the players end up investigating his house and what it contains.The Plantation is set in South Carolina but it starts, fairly briefly, in Arkham, which serves to draw the players in, before moving to the titular plantation in that state. The players function as patsies for the Great Old One, Yig, as they help stop a serpent woman on the god's behalf - knowing or unknowing - which will result in them confronting many venomous snakes and the occasional zombie.Crack'd and Crook'd Manse is set in the fictional Massachusetts town of Gamwell, which is situated west of Boston. The players are to investigate the disappearance of the owner on behalf of his lawyers, so that the latter can put his mansion up for sale if it turns out that the owner has disappeared for good.The Sanitorium is located on an island off the coast of New England, where the players are visiting a friend, the doctor who runs the place, only to find that he, and many others, are dead. The inmates are, however, not dead, and may be helpful or dangerous, as one accidentally called something up. Some of the story takes place in the sanitorium itself; other parts on the rest of the small island it is built upon.The final scenario, Mansion of Madness switches between Boston and Pennsylvania, with most of the action taking place in Boston, as the players confront a being from the Dreamlands that is trying to gain entry into this world to feat upon souls. One of the non-player characters in this scenario does have access to a couple of spells from H. P. Lovecraft's Dreamlands, but these could always be replaced with something else, should that supplement not be owned.

The Contents just lists the pages of the five scenarios, and the Player Handouts section but, rather unusually for a Call of Cthulhu supplement, this book has an Expanded Contents, which would appear to list absolutely everything of importance, including such as maps, handouts and non player characters. Consequently, navigation of the book is therefore rather easier than is the case in many of the supplements for this game system.The covers of the supplement are in full colour, but the internal illustrations are all in black and white. There are various illustrations that are appropriate to the associated text, ranging from around a quarter of a page in size all the way up to a full page. Many of the NPCs have the, fairly standard, portrait illustrations of their heads, and there are also a variety of maps, both internal and external, which give the impression of being hand drawn. The illustrations do add to the supplement and are appropriate, but the majority of the content  is text.Really only one of the scenarios, Crack'd and Crook'd Manse, completely revolves around a single building. The others tend to have multiple locations, although there does tend to be a primary building of some type, even though the scenario's climax may not happen at it. Mansion of Madness actually has two primary buildings. Buildings may be a common element in these scenarios, but they otherwise have nothing really in common, providing a nice, diverse set of scenarios with different foes, aims and dangers.

Credit: Chaosium Inc./eGDC LtdThere are a few new spells, monsters and mostly minor Mythos works amongst the adventures, but otherwise everything is standard. Even though one adventure references the Dreamlands, there is little need to actually have that supplement in order to play it. The Plantation is the longest scenario, followed by Mansion of Madness, both of which are double the length of the shortest scenario and are close to double or even greater the others.Given that the various adventures start in New England, are set there, or can be placed in that region, this can be a useful supplement to expand the adventure locations in the Lovecraft Country range. Although it is stated they can be used within an existing campaign as side adventures, some of these could quite easily result in the deaths of one or more characters - which isn't uncommon for Call of Cthulhu. Mansions of Madness is a nice and diverse group of short scenarios that can be used to flesh out a campaign and that have less in common with each other than might be suggested by the supplement's title. 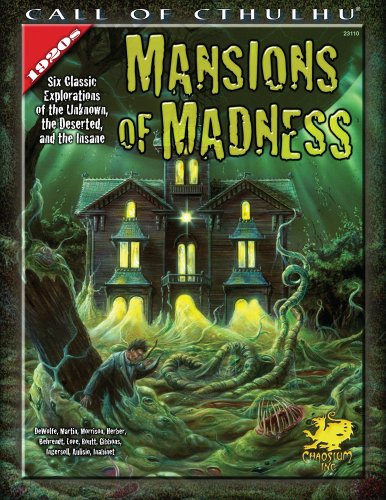