Get the Drizzt Do'Urden books or the updated Menzoberranzan supplement from Amazon. You too can earn money from writing articles by signing up for InfoBarrel.
InfoBarrel is a writing platform for non-fiction, reference-based, informative content. Opinions expressed by InfoBarrel writers are their own.
InfoBarrel > Entertainment > Games

A Review of the Role Playing Game Supplement Menzoberranzan

The Menzoberranzan boxed set was published by the original TSR, Inc., before they were purchased by Wizards of the Coast, for use with the Advanced Dungeons & Dragons 2nd Edition rules. The drow city of Menzoberranzan, which is located in the Underdark of the main Forgotten Realms continent of Faerûn, is famous as the birthplace of the drow Drizzt Do'Urden from the series of novels by R. A. Salvatore.

Credit: Jeff Easley/TSR Inc./Wizards of the Coast/eGDC LtdThe box set consists of the following:2 64 and 1 96 page saddle stitched books16 page The House Do'Urden Retrospective12 cardsheetsPoster of the box cover4 connecting poster maps of the cityPoster map of the House Baenre compoundPoster of the rivalries and alliances of the 18 major houses 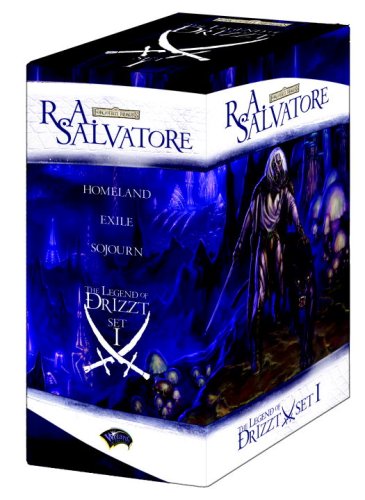 Book One: The City, by Ed Greenwood, is a 96 page saddle stitched book with colour covers. This book covers the city of Menzoberranzan itself, although it doesn't cover it in the same way that other cities usually are. The city itself is divided into several neighbourhoods, with some non-player characters and businesses described in them.Drow life in the city is described, as well as some of the major, non-House powers, such as the Priestesses of Lloth in general and the Mage Lords. Trade in the city, and its past, present and potential future are all covered. There are new magic items and spells, for both mages and priests, and several new monsters, with some typical drow traps covered as well.

Book Two: The Houses, by Robert A. Salvatore, Michael Leger and Douglas Niles is a 64 page saddle stitched book with colour covers and describes the major noble Houses of Menzoberranzan, which takes up the majority of the book, apart from the first section, The Law Within the Raging Chaos, which covers how drow politics work in a city founded on chaos.The eight highest-ranked of the Houses of Menzoberranzan are covered in the most detail, covering the occupants and forces of the house, alliances and rivals, with descriptions and stats for NPCs, as well as layouts and descriptions of the house residence and new magical items in some cases.The next ten houses in the ranking, just covering the occupants, forces, alliances and rivals, in the same way that the major houses were detailed, but with only a brief overview rather than the more in-depth coverage. The final group covered is not a noble house, but the mercenary band Bregan D'aerthe.

Book Three: The Adventure, by Douglas Niles, is a 64 page saddle stitched book with colour covers. This is an adventure that can introduce players to Menzoberranzan. The pre-rolled characters from the cardsheets can be used, either the six drow from the city, or the six surface-dwellers, also from the cardsheets.The adventure may, or may not, start off in Menzoberranzan, depending on whether or not the pre-generated drow characters are used, but whichever way it starts, it does finish there. Depending on where the adventure starts, the first two chapters will be played differently. There is also a detailed description of an Underdark market place.

There are 12 A4 cards. Seven of these have character stats on the back and a colour portrait of the character in question on the front. Six are pre-generated drow player characters; the seventh is an NPC. The pre-rolled characters and the NPC are all from the same drow house, with the NPC being its head. One card has a map with details of the same house. One card has the major female and male NPCs of another, opposing, drow house.One card has six more pre-generated, non-drow, surface dwelling, player characters. Two cards have maps of Battle Mazes on the front, and the details of the maze on the rear. It's stated that he Battle Mazes can be added anywhere suitable in the city, but they are both actually used with Book Three: The Adventure, as, in fact, everything on the cards is, or is intended to be.

This is a 16 page saddle stitched booklet. The booklet has details of House Do'Urden, before its destruction, including its dwelling and NPCs, covered to a similar level as that of many of the current Houses in Book Two: The Houses. As well as this, there are the full current details, at the time of publishing, on Drizzt himself, as well as various essays by Drizzt on a number of subjects. With the exception of one, previously unpublished, these are excerpts from various books, primarily from the Dark Elf Trilogy.

There are seven colour posters in total. Four of these make up a map of the city of Menzoberranzan. The map has various numbered locations, with the key on the maps themselves, along with some brief details. Some other locations, mostly drow noble houses, are indicated by their names. The houses are described in more detail in Book Two: The Houses. Some of the other areas are mentioned in varying levels of detail in Book One: The City.

The other three posters are a larger version of the box cover, a perspective map of House Baenre, the most powerful drow noble house in the city and the final one shows the symbols eighteen major house covered in Book Two, with the symbols of their friends and rivals next to them.

The book covers, cardsheets and posters are all in colour; the illustrations inside the books themselves are in black and white. Elements and characters described will be familiar to those who have read the appropriate Drizzt Do'Urden books.There are frequent references to the Forgotten Realms supplement, FOR2 Drow of the Underdark; without that supplement, a GameMaster will be lacking some of the details on drow religion, magic and magic items that are mentioned in the text, and will have to improvise. There are a handful of references to other supplements, but generally not to the same extent, although Tome of Magic does get more references, as spells from that are used in various NPC descriptions.This is the first real supplement to cover a drow city since D3 Vault of the Drow (which module was later incorporated into GDQ1-7 Queen of the Spiders), which described Erelhei-Cinlu, a drow city in the Underdark of the World of Greyhawk. The city is described as being comparatively small in drow terms, with only 20,000 inhabitants - drow inhabitants that is, as there are other races that live there, usually slaves, whose number is not disclosed.By its nature, Menzoberranzan is both a high-magic - every drow has spell-like abilities - and a very dangerous setting. The adventure has the potential to be very dangerous, if not fatal, due to the sheer number of potential threats that players could encounter if they annoy the wrong drow; individually, most of the drow should not be a threat to a party, but there are an awful lot of them, and by their nature they can easily be hostile.This is not truly a city supplement, as would be seen in most surface cities, but Menzoberranzan is a rather unusual city at that. Few of the locations are described in the sort of detail that would normally be seen, but this is not truly a city in the usual adventurers' sense of a place to rest up and explore. It has more in common with a dungeon than anything else, albeit an extremely dangerous one, even sharing the underground location. The Underdark itself is full of dangerous creatures and, despite their power, the drow of the city have only limited control of the areas around the main cavern, and deadly threats can wander in from the surrounding Underdark quite easily.Menzoberranzan may be set in the Forgotten Realms, but it is easy enough to adapt to other campaigns and worlds. With it being in the Underdark, any references to above-ground realms are largely limited to names; places such as Calimsham, Maztica and Waterdeep are referred to, but these could easily be replaced by other, appropriate, realms and cities from another setting. Beyond the fact that a major character from some Forgotten Realms novels hails from the city, it is not otherwise integrated very strongly with the main Forgotten Realms setting. The, also unusual, city of Skullport, beneath Waterdeep in Undermountain, is mentioned in passing, but, again, this is not really required in order to run it.The only real supplement required for the Forgotten Realms is the previously mentioned FOR2 Drow of the Underdark; there are simply too many references to things from that supplement to easily run this city without it. Menzoberranzan does stand quite well on its own without the Forgotten Realms setting, but it is not a city in the typical role playing game sense, and should not be treated like one, or players are too likely to die. 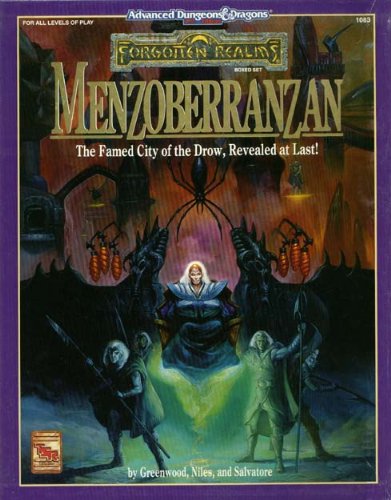