Buy Norek from Amazon or find more Shadow World supplements on RPGNow. You too can earn money from writing articles by signing up for InfoBarrel.
InfoBarrel is a writing platform for non-fiction, reference-based, informative content. Opinions expressed by InfoBarrel writers are their own.
InfoBarrel > Entertainment > Games

A Review of the Role Playing Game Supplement Norek: Intrigue in a City-State of Jaiman by Kevin Hosmer-Casey

Norek: Intrigue in a City-State of Jaiman by Kevin Hosmer-Casey is a role playing game supplement that was published by Iron Crown Enterprises for use with the Rolemaster and Fantasy Hero game systems and set in their fantasy setting of Shadow World.The supplement is an 80 page softback book that is stapled together. The front and back covers are in colour, and the various maps and illustrations inside the book are in black and white. There is an 8 page pull-out in the centre of the book, which is comprised of seven maps; colour maps of Jaiman and Norek, and black and white maps of Norek, the immediate locale with the adventure sites marked and black and white political maps of Jaiman, both of the continent and for the realms near to Norek. 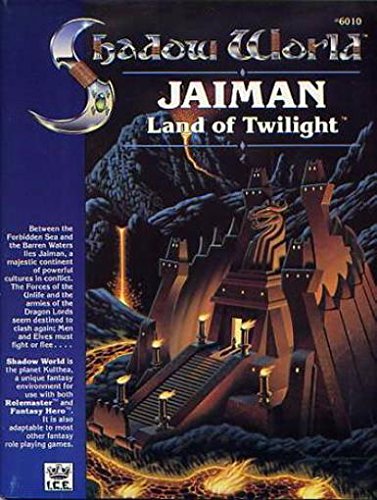 Jaiman, Land of Twilight (Shadow World Exotic Fantasy Role Playing Environment, Stock No 6010) Amazon Price: $29.99 Buy Now(price as of Jun 17, 2015)
The book is set in and around a small city on the continent of Jaiman, the titular Norek.

It is made up of eight sections, which are preceded by a page entitled Guidelines, which covers various abbreviations used in the text, the handling of adventures and some details on the Shadow World and Space Master settings.

Credit: ICE/DAvid MillerThe first section, An Introduction to Shadow World, gives an overview of Kulthea, the Shadow World setting, and some of the more important aspects of the world, which are covered in more detail in other supplements.Land and Inhabitants covers flora and fauna that are introduced in the area, and some of the types of peoples who can be found.History gives an overview of the history of Norek and the surrounding area.An Overview of the Region is a brief, one-page description of Norek and covers why the city is a good place to base an adventure from.Politics and Power describes the Orb of Rebirth, a significant magical item that has influenced Norek and the people who live there, as well as guilds, organisations and some notable non player characters (NPCs).Places of Interest in Norek has descriptions of various businesses and residences in the city.The Adventures section has a series of nine adventures. These follow a path, which is sometimes quite distinct, and are grouped together, with adventures 1-4 essentially being a story arc. The remaining adventures are less tightly integrated, but each one follows on from and refers to events that happened in previous adventures, developing a campaign. Each adventure is laid out in a similar manner.

Credit: ICE/eGDC LtdTables and Charts has Rolemaster and Fantasy Hero stats for NPCs, creatures and new significant magic items as well as encounter and price charts.

Norek: Intrigue in a City-State of Jaiman in Review

Even though the city of Norek is described, this is not strictly a citybook. A number of places in the city are covered, although not with maps, and the city itself is quite small and not covered in as much detail as would be typical in a true citybook. The locations that are covered are those that are most likely to be important to players. Instead, Norek is a base of operations and much of the book is devoted to the adventures.Each adventure has a number of smaller encounters that could be fleshed out or developed further, as well as items of news and rumours that could also serve as a starting point or adventure hook for adding more depth to a campaign based in Norek.Norek is an independent city, so it is less tied to its setting, even with said setting having had a fair amount of influence on the city. Converting this book to another system and setting is not as easy; adding it to the setting isn't too difficult, but the extensive statistics for both Rolemaster and Fantasy Hero would take some time to convert over to another game system.This is a popular supplement, but it is only available as an existing copy, and it is unlikely to be printed again or even available as a PDF, although there are other Shadow World supplements available in both PDF and hardcopy from RPGNow, so Norek is mostly suited as a collector's item. 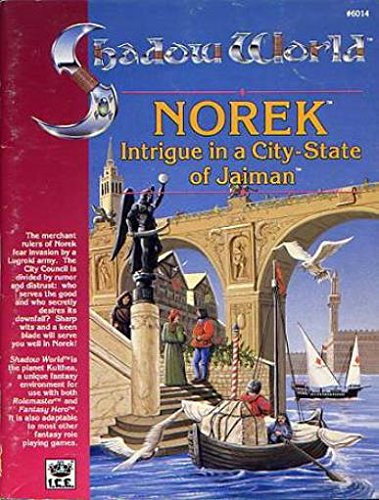