Get the Advanced Player's Guide cheaply from Amazon. You too can earn money from writing articles by signing up for InfoBarrel.
InfoBarrel is a writing platform for non-fiction, reference-based, informative content. Opinions expressed by InfoBarrel writers are their own.
InfoBarrel > Entertainment > Games

The Pathfinder Roleplaying Game: Advanced Player's Guide is a role playing game supplement published by Paizo Publishing for use with the Pathfinder Roleplaying Game. With it being for Pathfinder, the book is covered by the Open Game License and some parts are therefore Open Game Content.[1] This is a supplementary book of rules that can be used to expand the options available.The book is available as a printed hardback or as a watermarked PDF, the latter being what was reviewed. The PDF has a total of 338 pages, including covers, although it comes in several versions with multiple downloads, all of which are included in the price of $9.99. The hardback book costs $39.99 plus delivery. The PDF comes in a single file or one file per chapter, and these are each available in lite and standard versions. These variations can make the book easier to navigate and suited for both screen display and print.

Credit: Paizo PublishingThe supplement has two pages for the front and back covers, two pages of front matter, one page the Table of Contents, two pages are the Introduction, one and a half pages are the Index and one page is the Open Game License. There is also a one page advert for other Paizo products. The Introduction gives a brief overview of what each chapter of the supplement is about.Chapter 1, Races, covers the core races of the Pathfinder game and has racial attitudes, traits, including alternative, and favoured classes, as well as covering each class for each race for those who become adventurers.Classes, the second chapter, introduces six new classes equivalent to the core classes from the Core Rulebook, as well as alternative class features and archetypes for the core classes. The new classes are Alchemist, Cavalier, Inquisitor, Oracle, Summoner and Witch. With the exception of Cavalier, all the new classes are spellusers, although the spells available to the Oracle class are extremely limited, to the extent that there aren't actually any spell lists for the class.Chapter 3, Feats, has many new feats for players, laid out in the standard manner.Equipment has new weapons, armour, general equipment and goods and services.Chapter 5, Spells, has new spells. There are also spell lists; these are complete for all the new spellcasting classes in this supplement, but for the original core classes, the lists only show which of the new spells in this book the original core classes can use.Prestige Classes has eight new prestige classes, which function the same way as the original ones. These new classes are not tied to the new classes introduced earlier in this book; instead, most of them are usable by many different core classes.Magic Items introduces a number of new magical items of every type, including minor and major artefacts.The final chapter, New Rules, introduces three new optional rules, Combat Manoeuvres, Hero Points and Traits. Combat Manoeuvres expands on the existing manoeuvres in the Core Rulebook with four new ones - Dirty Trick, Drag, Reposition and Steal. Hero Points are a method of modifying rolls, and anything else the GM rules is permissible, in a "heroic" fashion. Only a few Hero Points can be had by a player at a time, to stop them from becoming unbalancing. This section also has new, related, heroic feats, spells and magic items. The final part, Traits, covers a means of customising characters. Although the section states that they are not tied to race or class, one of the five groups of traits is Racial; the others are Basic, Campaign, Regional and Religion. Traits are described as being roughly equivalent to half a feat in power.

The PDF has extensive bookmarks, the Table of Contents is pretty comprehensive and there is a thorough Index at the back of the book, all of which make it easy to navigate. The supplement has many full colour illustrations. There are smaller ones of things such as individual items, and larger ones, with half page and those at the beginning of every chapter that take up almost two entire pages. These illustrations, when combined with the extensive page backgrounds, make the supplement largely unsuitable for printing out.Like so many Pathfinder supplements, this one introduces new feats and new classes. Whether or not this is appreciated by the reader depends on personal preference. The new classes are interesting, even though they lean heavily towards spellusers, but Pathfinder does sometimes give the impression that there are far too many feats.The new Hero Points put a lot of the onus on using and giving them out to the GameMaster. Suggestions for both are given, but eventually it is up to any particular GM on how to use them without unbalancing the game, or annoying their players. This optional rule may possibly be more trouble than it is worth for some games.The Advanced Player's Guide is, in many ways, reminiscent of the Unearthed Arcana book for the original Advanced Dungeons & Dragons game - some of the new equipment in this book was also in that one, for one thing. Unearthed Arcana also had new racial details, new classes, new equipment and new spells, new magical items and new rules.This is not a standalone supplement, nor is it intended to be; instead, it is a supplemental set of rules for the Core Rulebook. All the new material is described as being optional, especially those in the last chapter, New Rules, but, a bit oddly, that chapter also effectively states that the core rules are not optional - something many GameMasters and players, who are used to customising all the rules for their own games, would disagree with.The supplement - which isn't just for players really - does provide a host of new options for playing and customising the Pathfinder game, and most will probably find something in the book they can use, especially the new spells and feats, which are the easiest to integrate. What is and isn't used is completely optional. The Advanced Player's Guide is a useful addition to any Pathfinder game, and is very nice to look at too. 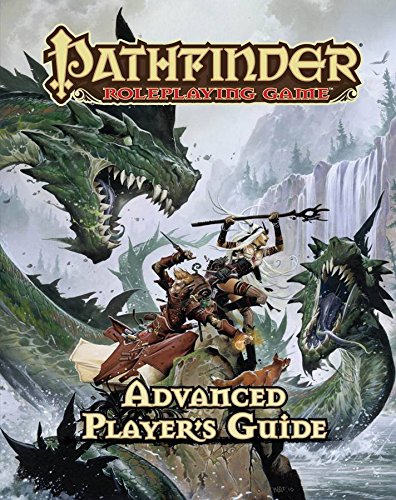