Buy the Gamemastery Guide from Amazon. You too can earn money from writing articles by signing up for InfoBarrel.
InfoBarrel is a writing platform for non-fiction, reference-based, informative content. Opinions expressed by InfoBarrel writers are their own.
InfoBarrel > Entertainment > Games

The Pathfinder Roleplaying Game Gamemastery Guide published by Paizo Publishing is a companion supplement on GameMastery, or running a game. The book is for the Pathfinder Roleplaying Game and is therefore covered by the Open Game License, so elements of it are therefore Open Game Content.[1]The GameMastery Guide is available in PDF for $9.99 or as a printed hardcover book for $29.99 plus delivery, with the PDF version being the one reviewed. The PDF has 322 pages, including covers. There are 2 pages full colour front and back covers, 2 pages of front matter, 1 page Table of Contents, 2 pages are the Index, 1 page is the Index of Tables, 1 page is the NPC Index and Open Game License and there is a 1 page advert for other Paizo products. One and a half pages are the Introduction, which defines what a Game Master is and gives an overview of each chapter of the book.Chapter 1, Getting Started is all the things that need doing before a game is started, including such diverse topics as the duties of the GM and whether food and drink are allowed at the table and, if so, who provides them. These have very little to do with the game itself, but are necessary components in making the game enjoyable for all. There are also details on creating a Campaign Guide for keeping track of their campaign and supplying players with useful details.Running a Game moves onto actually running the game, as the title suggests. This covers what are described as the art and science of GMing, including converting content for use with the Pathfinder game, in particular D&D 3.5, and personalising published adventures. The end of the chapter has a variety of useful tables and words.

Credit: Paizo PublishingPlayer Characters covers the actual players. How to create starting characters, how to deal with new players and how to deal with player types so that they don't cause problems and can be integrated into the game.Nonplayer Characters is about NPCs. The Core Rulebook concentrated on designing and equipping NPCs from a stat point of view; this chapter is more about making them into actual people. There are example NPC boons that can be rewards for players, divided into the main NPC types, how to create villains and some random tables for fleshing out NPCs.Chapter 5: Rewards is, unsurprisingly, about rewards. These include the role of rewards and what they are, starting treasure, designing spells, creating magic items and several dozen tables for creating random magical items.Creating a World covers world creation, and describes how the geography of a world is put together and the different types of societies. It also covers technology, time, the cosmos, parallel worlds, with some suggested idea, and the planes. The latter is covered again in Adventures and in a bit more detail in the Pathfinder Chronicles: The Great Beyond-A Guide to the Multiverse supplement.Adventures has different locations for adventures, including urban, dungeon, wilderness, taverns and other planes, and details on them, as well as general adventure details. There are also details on creating settlements with some examples.Advanced Topics is a grab bag selection on a variety of different subjects. There are details on customising your game and new rules on chases, disasters, drugs and addictions, fortune-telling, gambling and games of chance, haunts, hazards, mysteries and investigations, puzzles and riddles and sanity and madness.Chapter 9, NPC Gallery, has the stat blocks for over 80 different non player character. These are separated out into different types, such as City Watch, Entertainers, Merchants etc. and are representative of the various different NPCs that players can encounter in situations generally outside of adventures. Combat ratings are provided for these as well.The Appendix has a brief assortment of different topics. There are recommended literature, references, music and films, expanding on the list given in the Core Rulebook. There are three different one page sheets: a Campaign Sheet, a Settlement Chart and an NPC Sheet. Finally, there is a one page Basic Rules Cheat Sheet which lists the definitions for various basic terms used in the game.

The PDF is well bookmarked, the Table of Contents is good and there is a comprehensive Index at the back, so it is quite easy to navigate. There are also two supplementary indices, of Tables and NPCs. The first lists all the different tables throughout the book and the second the different NPCs from Chapter 9: NPC Gallery. These add an additional level of navigation to some of the more useful areas of the book. There are also extensive hyperlinks in the PDF, linking such as terms, spells, items and other material to the relevant descriptions.There are many full colour, and sometimes full page, illustrations throughout the book. The start of each chapter has an illustration that takes up most of two pages, with some text on the image in question. The cover illustration is from Rise of the Runelords.This may be a supplement for the Pathfinder Roleplaying Game, but a lot of the contents are rather more universal and are suitable for other roleplaying game systems as well as settings that aren't the customary fantasy. Getting Started, Running a Game, Player Characters and Nonplayer Characters are suitable for practically any fantasy game system. Rewards has some Pathfinder specific details, in the magic item tables, as does Adventures, with encounter tables listing Pathfinder monsters and settlement details, but the only chapters that are truly specific to the Pathfinder game are Advanced Topics, which introduce new rules for the game, and NPC Gallery, where all the stat blocks are Pathfinder stats. Even these last two could be adapted to D&D 3.5 relatively easily. Even many of the tables - of which there are more than a few - can be easily used, especially those that have no specific game stats. Some encounter tables reference particular monster from the Pathfinder Roleplaying Game Bestiary, but these are mostly common types that can be found in many fantasy games; the rest of the tables are generally even less specific to the Pathfinder game and can easily be used in other games, for such as location dressing.The Gamemastery Guide may be a supplement for the Pathfinder game, but it is one that is both easily adaptable and useful to any fantasy game system, and even has some elements, primarily in the first few chapters, that are suitable for settings other than fantasy, making this a useful book for any GameMaster, and not just one playing Pathfinder. 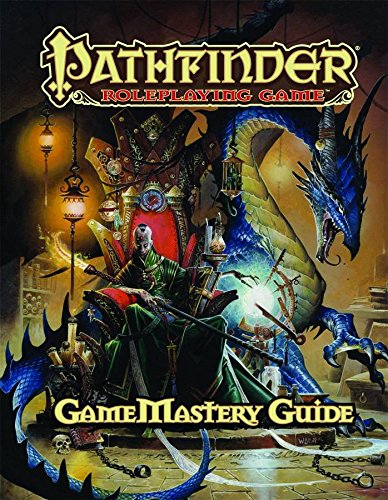