Rise of the Runelords Anniversary Edition is a role-playing game supplement for the Pathfinder game and published by Paizo Publishing. The books is written by a number of authors; James Jacobs, Richard Pett, Nicholas Logue, Wolfgang Baur, Stephen S. Greer and Greg A. Vaughn are each responsible for one of the six episodes of the book.The supplement is available as a watermarked PDF and a single hardcover book. The PDF has the purchaser's name and the order number on each page of the various PDFs available in the download. Rise of the Runelords was the first Adventure Path[1] released by Paizo Publishing for the Pathfinder game and this anniversary edition combines it into one volume, rather than the six it was originally, and in a hardback book rather than the six original perfect bound softcovers. The release was to commemorate the fifth anniversary of the original release of this Adventure Path and the tenth anniversary of the founding of Paizo.[2] The supplement is suitable for both the Pathfinder game and D&D 3.5. It is covered by the Open Game License and some of it is consequently Open Game Content.[3]This is an Adventure Path, which is a series of interconnected adventures designed to provide a complete campaign from start to finish.

The book is divided into six main chapters, each of which would previously been the core part of the original six supplements, as well as an Introduction and eight appendices.Introduction - This introduces the book, gives some details on goblins, provides a synopsis of the campaign and beyond, and describes how to use it.Chapter 1: Burnt Offerings - The first chapter introduces the players to the town of Sandpoint and has them dealing with a goblin threat, and the power behind it, foreshadowing the entire campaign.Chapter 2: The Skinsaw Murders - The second chapter sees the players dealing with some murders in Sandpoint, before sending them to the city of Magnimar.Chapter 3: The Hook Mountain Massacre - After helping out in Magnimar, the players are asked to check out a fortification near the town of Turtleback Ferry which has been out of contact for some time.Chapter 4: Fortress of the Stone Giants - The next stage sees the players dealing with the giant threat that launched the attack in the previous chapter.Chapter 5: Sins of the Saviors - In order to combat the threat of the Runelords, the players visit another plane to acquire needed weapons.Chapter 6: Spires of Xin-Shalast - Finally, the players head to the lost capital of Shalast, Xin-Shalast, to end the threat once and for all.There are eight appendices at the end of the book.Continuing the Campaign gives ideas on how to continue after the completion of chapter six, even if the players were defeated.Sandpoint details the town of Sandpoint, including the non-player characters that can be found there who will have an important influence on the early parts of the campaign.Magnimar provides brief details on the city of Magnimar, including a map, but does not cover that settlement extensively.Turtleback Ferry describes the settlement of Turtleback Ferry, but not in the same level of detail as Sandpoint.Xin-Shalast gives a brief overview of Xin-Shalast, but more details on the city can be found in chapter six.Bestiary introduces some new monsters.New Rules gives new rules on Sin and Virtue points, which play an important role in the campaign and need to be tracked, as well as Thassilonian magic.Magic Items collects together the new magical items, of all levels of power, encountered throughout the book, with some details on manufacture where relevant. 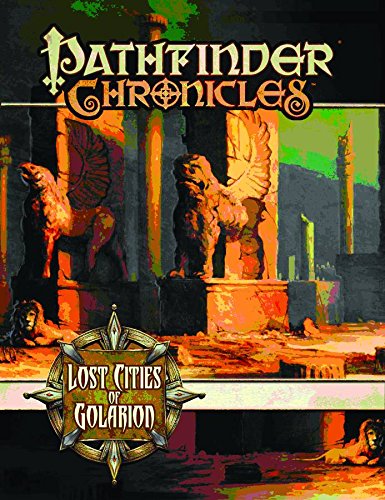 Credit: Paizon PublishingThe PDF comes as both a single file and as one file per chapter, with a final file for the appendices, as well as files for the front matter and cover. Both of these come in two different resolutions, normal and Lite, the latter designed for reading on portable electronic devices.The main PDF is extensively bookmarked, improving navigation. As well as the main PDF, in whatever format, there are two more PDFs included in the purchase.The first is the 10 page Handouts  supplement. The various player handouts throughout the main book are reproduced here separately for convenience.The second supplement is the 30 page Rise of the Runelords Anniversary Edition Interactive Maps PDF. This is included with the purchase of the PDF, but is also available separately for $14.99. As it is included, it should not be bought again. This contains maps of the various locations visited. These maps can all be adjusted, to remove GM-specific data, allowing players to view them. The precise data that can be altered is not the same on every map, but map tags can be removed and displayed and grids may also be removed. Once adjusted, the maps can then be printed or saved.

There are two free supplements available for download to complement the Adventure Path itself.More Magic of Thassilon is a 5 page PDF detailing 14 new magical items, two for each of the seven schools of magic used by the Runelords.The Player's Guide is a 20 page supplement providing a map of the town of Sandpoint and one of Varisia, and details background, races and classes for players planning to run characters in this Adventure Path, including local details to set them up in Sandpoint. Note that there are two versions of the Player's Guide listed, one for the original edition and one for the anniversary edition. There do not appear to be any differences between the two, and both are free in PDF anyway.

There are also a variety of other items, as well as the various books referenced, designed to enhance this Adventure Path, or to be used with it.

Rise of the Runelords Anniversary Edition in Review

This is a beautifully illustrated and put together supplement. The maps are all in full colour and there are many full colour illustrations too. Locations and events have descriptions that can be read out to players, adding to the depth.

Credit: Paizo Publishing/Robert LazzarettiEach of the original six parts was a 96 page softbound book. The anniversary edition is only 420 pages - the PDF is larger as the page count includes the front and back cover, Open Game License and five pages of advertisements - so the size is quite a bit smaller - over 150 pages smaller than the original version.The decrease in size has been done through a number of different means. Duplicate material, such as the Open Game License which would have previously been included in every separate book, has been removed, and the introductions to all six have now been removed too. According to Paizo Publishing, parts that have also been removed are monsters that are now part of the official rules, fiction, monster ecologies, bestiary entries and campaign material that is not directly relevant to this Adventure Path.The anniversary edition has been updated with revised rules, new illustrations and feedback from the Paizo community regarding the original Adventure Path, so it should be better in how it works than it was previously, as it has had a fair bit of feedback.Rise of the Runelords is not really a standalone adventure, and is probably less so than the original. Some of the originally included material has been moved into separate books or is now part of the main Pathfinder work. There are quite a lot of references to other Pathfinder books, some of which will definitely be needed as otherwise there is inadequate information provided now on various monsters and magic, and even a reference to a supplement published by Chaosium Inc. (in fact there is quite a Lovecraftian theme to elements of the adventure, especially in Xin-Shalast, whose description bears more than a few similarities to a location in H. P. Lovecraft's The Dream Quest of Unknown Kadath). The original Adventure Path was probably a lot more comprehensive, but those who didn't get it originally are likely to have acquired the missing information in supplements published since.Possibly the biggest complaint would be how linear the book is. It is very much this, and then this, and then this, but this is briefly considered in the Introduction, where it suggests that the full Adventure Path should not necessarily be played through from start to finish, but there should be other things done along the way. The risk with this is that, if the diversions are too large, the players could become more powerful for a particular chapter than they are supposed to be - each is intended for the players to start at a certain level of power and finish at another.There is quite a bit of supplementary detail, in particular the town of Sandpoint, even if there is less than there was in the original. This can provide useful information for expanding the area covered.Overall, Rise of the Runelords Anniversary Edition is a comprehensive and well detailed complete campaign that should provide a lot of entertainment, even with the potential flaws mentioned. 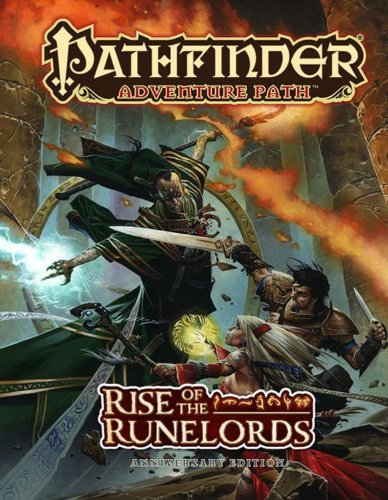