Buy SJR5 Rock of Bral or other Spelljammer supplements from RPGNow. You too can earn money from writing articles by signing up for InfoBarrel.
InfoBarrel is a writing platform for non-fiction, reference-based, informative content. Opinions expressed by InfoBarrel writers are their own.
InfoBarrel > Entertainment > Games

SJR5 Rock of Bral by L. Richard Baker III and published by the original TSR, Inc., which was later acquired by Wizards of the Coast, is a role playing game supplement for Advanced Dungeons & Dragons 2nd Edition. The book is set in the Spelljammer campaign setting, which is subtitled "AD&D Adventures in Space." Consequently, this is one of the more unusual citybooks around; as it's for the Spelljammer setting, it is an asteroid based city-state, rather than the more typical land-based port cities common to fantasy worlds, and the entire setting is different in many ways from even the standard D&D/AD&D settings, with the probable exception of Planescape and its signature city of Sigil.

Credit: Erik Olson/Wizards of the Coast/eGDC LtdThe Rock of Bral makes multiple appearances in the various Spelljammer supplements and books, including in the original boxed set in which there was a map of the city. Bral, and its asteroid, playing a major role in the setting, as other signature cities did in other settings.The version reviewed was the original 96 page saddle stitched book. The supplement has full colour front and rear covers and black and white illustrations and floor plans inside. There is one page front matter and Table of Contents and a one page advert. Also accompanying the supplement is a 31.5" x 21" colour fold out map that is similar to the original one in the boxed set, but with the addition of a map of the Underside and a district map, although without the original, cross-sectional map showing brief details of areas below the surface. The original book is out of print but copies can still be found and the supplement is available to buy as a scanned image PDF on RPGNow. The original fold out colour map would appear to be included in the PDF now.The supplement is divided into four parts and an Introduction. Each of the first three parts is divided into multiple chapters, whilst the fourth and final one isn't. The one page Introduction introduces the city, gives a brief overview of the four parts, suggests possible existing locations in the Spelljammer campaign setting to place the city - it has no definite address, and it is on an asteroid, so it can be placed where desired, and suggests that it could even be used as a planetary port.

Credit: Erik Olsen/Wizards of the Coast/eGDC LtdPart One: The Crossroads of Wildspace is divided into three chapters. The History of the Rock gives an overview of the history of the city, in particular the most recent period which involved its transition from a pirate base to a mercantile city.Life on the Rock of Bral covers trade, and currency, how the government works and how law and order are enforced - to a large extent they aren't and an overview of the more active criminal elements, as well as the types of costs that are incurred simply from living there.Matters of State covers the prince's court - Bral is ruled by a prince who is close to being an absolute monarch - how the city deals with foreign nations, an overview of Bral's military and details on mercenaries and privateers who use Bral as a base.Part Two: A House Divided is divided into another three chapters. Personalities of Bral covers some of the major non-player characters on the Rock; the Prince and his court, other NPCs involved in government, foreign emissaries and a handful of other noteworthy people.

Credit: Diesel/Wizards of the Coast/eGDC LtdGuilds, Societies and Orders details various important factions, some of them local but others operating throughout Wildspace. Houses and Companies is in a similar vein but concentrates on more mercantile organisations, such as mercenary forces and merchant houses.Part Three: The City Among the Stars is divided into four chapters and covers the city itself, detailing 155 different locations across the Topside and the Underside of the Rock, with a handful of maps covering certain locations. Of the four chapters, three cover the Topside, from the best locations to the worst, in general, being The High City, The Middle City and The Low City. The fourth chapter, The Underside, covers the underside of the Rock, primarily a military base and farms.Part Four: Adventuring in Bral is the only part that isn't divided into chapters. This part has information suited for players, with details on several races and different character classes and how they would be played in a campaign based on the Rock. The final part has some DM information on running a campaign on the Rock, some random encounter tables, and a brief, one page section with four adventure seeds.

SJR5 Rock of Bral in Review

Credit: Diesel/Wizards of the Coast/eGDC LtdIt's suggested in the Introduction that Bral could be used as a normal, land-bound city, but this would require quite a bit of conversion work, especially as there are buildings on both the upper and the underside of the asteroid. the Underside in particular makes little sense as it is laid out as a planetary city, as for one thing the fortifications there are designed to defend from airborne attacks. Having said that, it could be adapted and would certainly make an interesting, if dangerous and possibly piratical, free city.Bral does not work that well by itself without other reference materials from the Spelljammer setting, as there are references to quite a few races, ships and other items that are not covered here at all. Spelljammer is a very high magic setting, as simply using the namesake spelljammer vessels requires the use of magic-wielding characters. Consequently, magic is extremely common, probably even more so than in most other Dungeons & Dragons settings, and it has the capability of overpowering any other game. The city is also quite dangerous for low level characters, as law and order are most directly related to power, and it is very cosmopolitan, with many other, often dangerous, races inhabiting it.Many, but not all (those that don't usually have an illustration of the same size), of the pages have a black section at the bottom. The contents in these vary, from being extract from the text on the page to new snippets of information to game stats for items or NPCs. There are a variety of full and half page black and white illustrations within the supplement. The full page illustrations are at the beginning of every part, whilst the half page illustrations - although, once the header and the bottom matter are taken into consideration, much less than half of the page is actual text - appear at various points throughout. The illustrations are relevant ones, and often relevant to the text on or near the same page. There are also a number of black and white floor plans of a handful of buildings.One suggestion given for evolving the city is similar to how the City of Greyhawk and Waterdeep evolved - namely, from a place to rest up between dungeon delving (in this case, exploring Wildspace) to an actual adventure location in itself. The Rock does appear in various other official supplements for the Spelljammer setting, and can therefore be covered in more detail when it is visited in other adventures. SJR5 Rock of Bral is an interesting supplement detailing a rather unusual, dangerous and cosmopolitan city in one of the more original fantasy settings around, but outside that setting it is harder to use. 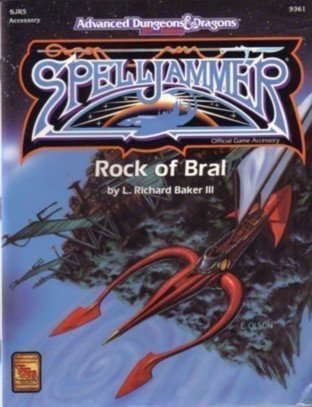