Get the original Sacraments of Evil from Amazon or find more Call of Cthulhu products on RPGNow. You too can earn money from writing articles by signing up for InfoBarrel.
InfoBarrel is a writing platform for non-fiction, reference-based, informative content. Opinions expressed by InfoBarrel writers are their own.
InfoBarrel > Entertainment > Games

A Review of the Role Playing Game Supplement Sacraments of Evil

Sacraments of Evil by Scott David Aniolowski, Fred Behrendt, Penelope Love, Kevin A. Ross and Todd Woods is a role playing game supplement published by Chaosium Inc. for use with the Call of Cthulhu game based on the works of H. P. Lovecraft. This supplement is based outside of the standard New England/1920s setting, being a collection of six scenarios set in Britain in the 1890s. This supplement is the third in a series for Victorian Britain that began with Cthulhu by Gaslight.The supplement is only available as the original printed book, which is what was reviewed, copies of which can still be acquired from places such as Amazon. The book has 144 pages, four pages of which are the front matter and Contents, three pages are the Introduction, which includes a map of Britain and a full page map of London with the sites from the various adventures marked on both of them, although not all the adventures take place in London even if they may start there, as well as a brief overview of each of the scenarios and a couple of paragraphs on how investigators would behave in the period, there is one page of adverts for other products and two pages are for the 1890s Character Sheet.

Credit: Chaosium Inc./John T. SnyderThe first scenario, The Eyes of a Stranger, is set in London and sees the players going up against a body jumping worm of Yekub and its various human hosts. Due to a possible link to Jack the Ripper, the players are also opposed by a group that believes that the Yekubian's initial human host was the serial killer, as well as by a Chinese crime organisation known as the Si-Fan, which is a fictional organisation from the works of Sax Rohmer, one to which Dr. Fu Manchu belongs, although the latter does not make an actual appearance in this adventure.The Masterwork of Nicholas Forby takes place in Middlesex where the players visit the house of a former school friend of one of them, and confront a creation of his grandfather's, as well as a more mortal opponent, whilst looking for the family treasure.Plant Y Daear, which is Welsh for Children of the Earth, is set, not surprisingly, mostly in Wales. It follows the death of one of the people who attended the party at the beginning of The Eyes of a Stranger, and sees the players accompany the dead man's heir, his nephew, to a Welsh estate which the latter has only just found out about. The foes are the Little People, a degenerate form of the serpent people.The titular Sacraments of Evil sees the players travel to York, in particular York Minster, where a lloigor has recruited a human to help recharge it by performing a number of murders. A copycat killer muddies the situation.

Credit: Chaosium Inc./John T. Snyder/eGDC LtdThe Scuttling is largely set on board a ship travelling between Britain and the U.S. and back, stopping in New York to collect a statue reputed to be of Lady Jane Grey. On the voyage back, the ship picks up a gigantic prehistoric eurypterid and its young, which start killing off the crew.The final scenario, Signs Writ in Scarlet, sees a number of murders committed in Whitechapel by a former asylum nurse who has been driven mad by her employer's experiments and escaped. These temporal experiments also resulted in the attention of a Hound of Tindalos being attracted.The supplement concludes with 1890s Investigators, a Guide, which is intended to be used for creating British investigators in the Victorian period, is are a short summary of the process including a page of attack skills.

The supplement has full colour covers with the interior illustrations, maps and plans all in black and white. There are maps, both interior and exterior, of the various locations, and plans of the ship used in The Scuttling, as well as illustrations, ranging from around a quarter of a page to around half a page in size, and are appropriate to the nearby text. Unlike many Call of Cthulhu supplements, there aren't many non-player character portraits; often, nearly every NPC has one of these. The maps and plans have what look like reproductions of actual maps from the time period, and maps of the various buildings which have a hand drawn appearance. There are an adequate number of maps, and they fulfil their role, but the majority of the book is text, however. The layout is decent, and there don't appear to be many errors in the text itself.The Contents has the scenarios and the guide, with further entries for major illustrations, maps and plans. Navigation is therefore okay but, like many Call of Cthulhu supplements, it could be better. The book has a handful of new spells, creatures and some minor Mythos tomes, as is quite typical. The lengths of the different scenarios varies, with Signs Writ in Scarlet being the longest and most of the rest, apart from The Eyes of a Stranger, being around half to two thirds of that adventure in length. Many of scenarios are potentially, and often definitely, fatal to characters who take part in them, but this is also typical of Call of Cthulhu adventures.This is a useful supplement for any Gaslight Call of Cthulhu campaign, and could be used as side adventures in a larger campaign, although the as-mentioned dangerous nature of many of them could easily result in characters being killed outside of the main campaign. The scenarios are not really suitable for dropping into any campaign outside of that era, and would also be difficult to use in another setting. They are also quite intricately bound to the Basic Role Playing system that Call of Cthulhu is part of, so adapting the adventures to other game systems, whilst possible, would require a bit of work. Sacraments of Evil is useful for a Call of Cthulhu campaign that is set in Victorian Britain in the late 19th century, but isn't that much good for anything else, nor is it really intended to be. 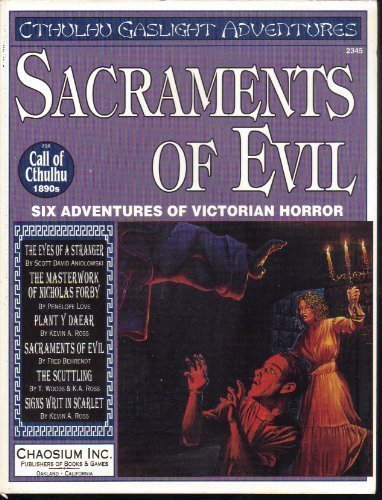