Buy Shadow World Player Guide - The World or find more Shadow World supplements on RPGNow. You too can earn money from writing articles by signing up for InfoBarrel.
InfoBarrel is a writing platform for non-fiction, reference-based, informative content. Opinions expressed by InfoBarrel writers are their own.
InfoBarrel > Entertainment > Games

Shadow World Player Guide - The World by Terry K. Amthor is a role paying game supplement published by Guild Companion Publications intended for use with their Shadow World high fantasy setting, which also has science fiction elements, and the various iterations of the Rolemaster role playing game. This was stated to be the first in a planned series of supplements, although this is the only one which has been published so far, and it is uncertain as to what the others may be.The Player Guide is available in PDF and premium and standard print on demand softcover editions, all of which are in full colour and can be purchased from RPGNow. The PoD editions are published using RPGNow's service. PDF and softcover bundles are available, although there is no discount for buying them together. The cost of the premium softcover and PDF version together when purchased was $22.19, plus delivery of $5.31 by Royal Mail second class, although the delivery charge will vary depending on the country.

Credit: Craog John/Guild Companion Publications/eGDC LtdThe book has 53 numbered pages in total in the printed version; there are 56 in the PDF including the front and back covers and a one month calendar which isn't in the print edition and is probably intended as a handout. In the softcover version, one of the pages is the front page with copyright and other assorted details, one is the Table of Contents and one is the Index at the rear of the book.Introduction introduces the Shadow World setting, the world of Kulthea, and gives an overview on how to handle lore skills and knowledge tiers for the various knowledge tables in the book.Overview mostly details the calendar and seasons of the Shadow World.The Heavens details the rather complex lunar system of Kulthea and major constellations.The Essænce describes Essænce, the power that is the source of all magic on Kulthea, and the sometimes devastating effects it can have on the environment.Geography covers climate, weather, the continents and some wonders of the world.Gods and Religion primarily concentrates on the two main pantheons of Kulthea.Races gives an overview of the various intelligent mortal and immortal races that players are likely to encounter or play.

Credit: Craig John/Huild Companion Publications/eGDC LtdHistory is a brief historical overview of events.Powers of Note gives an overview of the two main organisations of non-player characters that players are likely to come in contact with directly, the Loremasters and the Navigators.Languages gives brief details of some of the major languages, and limited dictionaries for two of them.Appendix is a grab bag with details on gems, metals, technology, government and subsistence types.

Evaluating Print on Demand and Delivery

The book was ordered in premium softcover. At that time, standard softcover was not available, but it is now. The premium version gives slightly better quality to the pages, although for most this will not be necessary. Delivery was, as usual, very quick, helped by the fact that one of RPGNow's two print on demand printers is in the UK, making the delivery within the same country. The other centre is in the US; delivery outside of those two countries will probably take longer.

The PDF is extensively bookmarked and searchable, making navigation of it easy. The book is beautifully illustrated with many full colour illustrations, but only one map of the western hemisphere of Kulthea, the true name of the Shadow World. The pictures that illustrate specific locations have a small, inset map on them showing where the place pictured actually is on a map of one of the continents, which can then be matched up to the world map.Although this book is set on Kulthea, and in theory is designed for the various Rolemaster systems, it is surprisingly system-neutral, with very little in the way of system-specific stats, only some knowledge based tables that are still not that system-specific. It could therefore be very easily adapted to other game systems. The World is not enough by itself to run a campaign on Kulthea, as there simply isn't enough detail given, but that is not its purpose. The contents are aimed at players in order to familiarise them with the setting, not GameMasters, so some of the material is deliberately inaccurate and based on common knowledge rather than accurate knowledge. Shadow World Player Guide - The World is certainly not a standalone book in itself, but it is a lovely piece of work and a useful supplement for any GM planning to run a Shadow World campaign. 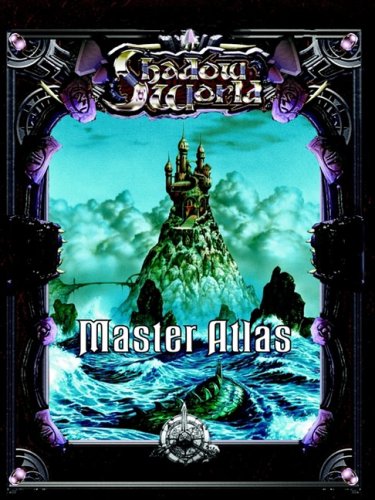