Buy Shadows Over Vathak or the other Vathak supplements from RPGNow. You too can earn money from writing articles by signing up for InfoBarrel.
InfoBarrel is a writing platform for non-fiction, reference-based, informative content. Opinions expressed by InfoBarrel writers are their own.
InfoBarrel > Entertainment > Games

Shadows Over Vathak by Jason Stoffa and Rick Hershey is a role playing game supplement published by Fat Goblin Games for Paizo Publishing's Pathfinder game. This is a setting and rule book - although the rules are, of course, simply additions to the Pathfinder system - for what is described as a setting of Lovecraftian Survival Horror; Lovecraftian means that is influenced, to some degree, by the works of H. P. Lovecraft. Vathak is a continental setting formerly ruled by vampires and in which ancient horrors, known as the Old Ones, have just awoken. With this being for the Pathfinder game, the supplement is covered by the Open Game License, so some of it is considered to be Open Game Content.[1]This supplement is a 258 page pay what you want, although the suggested price is $25, PDF that is available from RPGNow, although it is also available as a printed book from other sources. Of the PDF, 2 pages are the colour front and back covers, there are 2 pages of front matter, 1 page is the Table of Contents, there are 2 pages for the Open Game License and a 1 page advert for the print version from Chronicle City. The covers are in colour, but the interior is in black and white.Never Explain Anything details how the book came about - it originally was a 24 hour design experiment - a brief overview of the setting, how to use the book and the rise of the Old Ones, the most significant event in the history of the setting. This section also lists authors other than Lovecraft that have been used for inspiration, primarily Gothic horror authors.Races of Vathak covers the six major races of Vathak. Three of these are human, one is a human/vampire half-breed, one a tainted human and the final one, the svirfneblin, the only truly nonhuman major race. Each race has details such as descriptions, favoured class options, adventurers and alternative racial traits. There are also brief details on some other races, the standard nonhuman ones, which are mostly minority races in the setting.

Credit: Fat Goblin GamesClasses of Vathak provides a variety of new classes, with their associated feats and abilities, for the setting. There are also archetype classes, both for the new classes and for almost all of the standard ones.Feats of Vathak is new feats for the setting.Equipment of Vathak covers various new pieces of equipment, including firearms, war machines and wondrous items.Magic of Vathak is a list of new spells for different classes, including the new ones in this supplement.Lands of Vathak actually covers the setting itself. There is an overall black and white labelled map, and the continent is divided into different regions. Each of these regions has its own map, and details of its History and Cities. The cities are laid out in the standard Pathfinder manner, although many of them are much smaller than a typical city, going down to hamlets of just a few dozen occupants.Religions of Vathak covers religion. There is only one, primary religion, that of the One True God, and the god, church, holy texts and holidays are covered. There are also details on several old ones, who are also worshipped as gods, and several factions.Game Mastering is a grab bag of different rules, including trust (Vathak is a paranoid setting, and people do not trust easily; this can have positive or negative effects), a random adventure generator, fear, insanity and forbidden knowledge, weather, diseases, including some new ones, and how to create a settlement. There is also a list of random village traits, and an image of a typical village.Monsters of Vathak covers a range of new creatures.Templates has various templates that can be added to different creatures, and some random encounter tables.

The Table of Contents is decent, and the PDF is fully bookmarked. The only complaint with the latter is that the PDF's bookmarks could have been organised a little better; they are simply one long list, rather than being arranged into subsections as is more customary.There are quite a few noticeable formatting and grammatical errors, such as text that is the wrong one of bold, italic or regular, sentence fragments or words are missing and on a number of occasions the wrong word has been used - the word is spelled correctly, it's just that the wrong one has been used (it's instead of its, their instead of there, errors of that type). This does seems to get worse later on in the book, and some sections look to have an error in every paragraph. This is a shame, as the book otherwise is laid out well and is nicely illustrated.As is common in Pathfinder settings and supplements, there are a host of new classes, archetypes and feats, as well as new spells and magical items. These, along with the new equipment, take up a good chunk of the supplement, as does the Bestiary and Templates. There isn't a huge amount of detail on the setting itself, although there are a range of other supplements of different types published for it.Dungeons & Dragons, and those games based on it, of which Pathfinder is one, is not the best system to use as a base for a Lovecraftian horror setting - or, indeed, any horror setting - although the AD&D 2nd Edition Ravenloft did make a reasonable attempt. The powerful beings that, in games such as Call of Cthulhu (also based on Lovecraft's work, and the most well known example of such), would almost certainly result in the death of players in a head to head confrontation, are largely regarded as simply being big, dangerous monsters in D&D based games, not overwhelming forces, and players have a long history of confronting such beings, and defeating them, in the system, almost since the earliest days of the game. Primarily, this has been demons such as Tsuggtmoy in The Temple of Elemental Evil, Lolth in Queen of the Spiders and Orcus and Tiamat (and possibly in others) in The Throne of Bloodstone.In other Lovecraftian horror games, with Call of Cthulhu being the most well known, knowledge is dangerous; the more knowledge a player has, the more fragile their sanity. Acquiring enough knowledge to defeat a Mythos entity can destroy the mind of the player. Mythos knowledge doesn't feel quite as damaging in this setting, and it can be restored with magic. Wisdom also provides a benefit, and in other settings, this would be less likely.Like other Lovecraftian games, this does have books of dangerous knowledge, although these are essentially tweaked spellbooks. Each book, which do have interesting backstories and description, has spells like a normal spellbook, but also impart the setting's equivalent of Mythos knowledge and may have associated preparation rituals which confer benefits.

Another common element in Lovecraftian games is that magic is dangerous to use and will more than likely destroy a character using it, should they cast too many spells. This is an element which is completely absent from this game; magic is just the standard magic, and there is no danger in using it.This may be a Lovecraftian setting, but there are very few references to Lovecraft's own creations, these being the Mi-Go, a Deep One template and a quote from The Call of Cthulhu.The setting would be better described as being dark fantasy rather than Lovecraftian survival horror. The setting is dangerous, but there isn't really a feel of either cosmic or survival horror. Yes, it's dangerous, but the average Pathfinder character is not going to find the problems associated with survival horror, nor are they going to be overwhelmed by many of the monsters. They just won't feel horrific enough. Also, being able to create Mi-Go technology using Craft Wondrous Item removes rather a lot of the mystique from it.The overall feel is similar to that of the Warhammer Fantasy setting for Warhammer Fantasy Roleplay and Warhammer Battle, with the Empire in a Germanic-European setting, an Empire where Chaos lurks and threatens order. Vathak has an Eastern European location feel, rather than purely Germanic, which are some of the influences of the original Ravenloft module, and which later inspired the setting of the same name.Although there is a suggested price of $25, the supplement is pay what you want so you can take a look at it first and then decide what you want to pay for it, which does make it good value for money, a try before you buy setting. Shadows Over Vathak is a decent dark fantasy setting, although not truly Lovecraftian survival horror, although more setting and less rules would be appreciated, and seeing as you can get it for free, it's a no-lose situation. 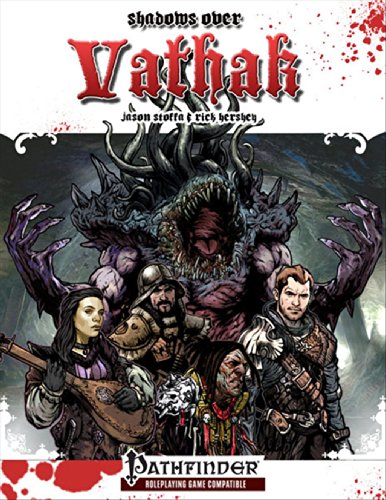