Get the PDF of Tales of the Miskatonic Valley from RPGNow or the original printed version from Amazon. You too can earn money from writing articles by signing up for InfoBarrel.
InfoBarrel is a writing platform for non-fiction, reference-based, informative content. Opinions expressed by InfoBarrel writers are their own.
InfoBarrel > Entertainment > Games

Tales of the Miskatonic Valley by Kevin A. Ross, Scott Aniolowski, Geoff Gillan, Richard Watts, Keith Herber, Erik Herber and Todd A. Woods is a role playing game supplement published by Chaosium Inc. for use with their Call of Cthulhu horror role playing game based on the works of H. P. Lovecraft. The supplement is set in the 1920s and is the fourth book in the Lovecraft Country series set in Lovecraft's New England in the 1920s.This supplement is a set of six adventures set in and around the locations detailed in the previous supplements in the series. It is currently available in watermarked PDF, made from scans of the printed book, for $10.42 from RPGNow, although copies of the original printed book can still be found. Tales was not overhauled like some of the books in the series were. The version reviewed is the original printed book, which has 128 pages. There are four pages of front matter and Contents, the Introduction is one page, there are eight pages of single-sided player handouts for reproduction, one page listing other products by Chaosium and one page listing the towns and cities in the area, along with populations and some brief details on them. Some of these locations are the fictional ones from Lovecraft's New England. The printed book also comes with a fold out, approximately A2 size, map of Lovecraft Country in 1921, showing towns, roads, railroads and terrain features.

Credit: John T. Snyder/Chaosium Inc.The first adventure, Freak Show, is set at a travelling carnival that visits Arkham, Bolton and Aylesbury. The carnival has acquired a new freak, a Deep One baby. Deep One hybrids from Innsmouth are attempting to recover the baby. This will have to be before the attack on Innsmouth, and therefore before the primary adventure in the Escape from Innsmouth supplement, The Raid on Innsmouth. After that attack has taken place, the Deep Ones and the hybrids would not be able to participate in a rescue attempt, probably due to being dead. This adventure needs to be run before that one, or an alternate origin for the hybrids will need to be supplied.Regiment of Dread is set in Arkham and involves a new avatar of Nyarlathotep and an attempt to rewrite a battle of the American Civil War by a man who displayed cowardice the first time around and wants to change that.A Painted Smile is set in Arkham and is about a doll that kills, covering the fear of evil dolls and toys that do not behave the way they should.The Watcher in the Valley is set in the Upper Miskatonic Valley, not that far from Dunwich, and is an archaeological dig that uncovers something rather nasty.Fade to Grey is about some missing teenagers and is set primarily in Kingsport, with some investigation in Arkham and a possible investigation in Goatswood in England, and is influenced by Oscar Wilde's novel The Picture of Dorian Gray. The primary opponent in this is Basil Ives, who also works at Miskatonic University, and an Insect from Shaggai.Trail of Yig begins in Arkham and continues to the Dunwich region where a mound sacred to Yig is involved.

The Contents is adequate, dividing the book into the major adventures, and the main parts of those adventures. It could have been improved upon, as there are sections that aren't in the Contents that could have been. Navigation is therefore okay, but not stunning.The supplement has full colour covers, but the interior work is all in black and white, as is standard for Chasoium's publications. Many of the illustrations are portraits of the various non player characters; there are also some internal and external maps and some illustrations relevant to the accompanying text, up to full page in size. The quality of the illustrations is good. There are a few grammatical errors in the book, such as missing words or sentence fragments, but overall these are uncommon. The overall layout and appearance is decent and rather typical of Call of Cthulhu supplements. The main draw is the amount of text, rather than pretty pictures, but there is nothing wrong with the illustrations used and they do the job that they are supposed to do.

Credit: Chaosium Inc.Although the adventures are set in various, previously covered locations, it is stated that a Keeper could transplant them elsewhere with a little work. The amount of work does depend on the scenario; some would require more than a little modification. A number do rely on organisations, and NPCs, from already covered locations, so names and organisations would need changing in order to use those scenarios. The supplement is therefore best used to flesh out the Lovecraft Country from the other supplements in the range, providing more detail and adventures for this iconic Lovecraftian region. If they are used elsewhere, the rather nice map that is provided is not exactly useful for the adventures. There are a few new spells, monsters and minor Mythos documents, but overall most of the material used is that which already exists. The scenarios have a blend of clues and misdirection, with the latter being most likely fatal - perhaps to an investigator, but perhaps to an innocent third party.

Credit: Gus DiZerega/Chaosium Inc.This is a handy collection of scenarios which can be interwoven into an existing campaign, possibly between major adventures. They are generally of a shorter length but shorter does not, in Call of Cthulhu, necessarily mean safer. It is highly probable that some, or possibly all if they make a mess of things, investigators will not make it through an adventure without significant damage, but this is to be expected in this game. Most of the adventures are Mythos based with typical Mythos foes; A Painted Smile is a bit different from the rest, really having more to do with other horror staples than the cosmic horror of Lovecraft. Tales of the Miskatonic Valley is therefore a decent collection of scenarios, but ones that are best used in Lovecraft Country so that they can make use of the supporting material rather than elsewhere. 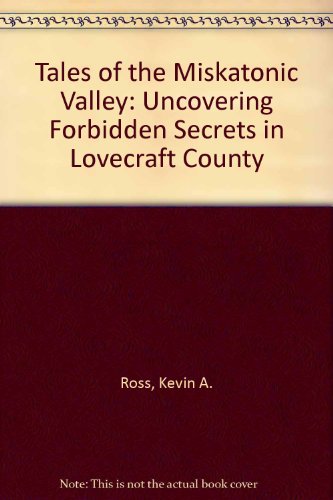