Buy The Book of Taverns from RPGNow. You too can earn money from writing articles by signing up for InfoBarrel.
InfoBarrel is a writing platform for non-fiction, reference-based, informative content. Opinions expressed by InfoBarrel writers are their own.
InfoBarrel > Entertainment > Games

The Book of Taverns by Chris Jones is a fantasy role playing game supplement and gamemaster's resource that is published by Necromancer Games. Taverns are often a focal point of players' interactions with non-player characters (NPCs); they can be the starting point of quests and campaigns, meeting places and useful sources of information. Organisations may use them as a base, and so may players, whether within an urban area or without. One way or another, it is highly probable at some point that players will visit a tavern, so having ones that are well detailed is an important part of the gamemaster's toolkit. This book aims to provide a set of taverns for such cases.The Book of Taverns has 111 pages and is available from RPGNow as a watermarked PDF and as a softcover black and white print on demand book, or as a bundle which contains both a the PoD book and a PDF. Watermarked PDFs normally have the purchasers name and order number added to every page but, oddly, this one didn't have that. With the hardcopy book not being available in colour, only standard quality was available, which uses a thinner paper than premium. The hardcopy book and the PDF both have black and white illustrations and maps inside and a colour front and back cover. When purchased the price of the softcover and PDF bundle from RPGNow was identical to that of the softcover alone, so it made sense to buy the bundle, as it did not cost any more. The supplement is aimed at the d20 System and, as such, some of the book is covered by the Open Game License.[1]

Credit: Llyn Hunter/Necromancer GamesThe Book of Taverns describes ten different taverns, suitable for a variety of locations. Each tavern's description is laid out in the same way. The Introduction gives a brief overview of the tavern. The Background provides a more in-depth description of the history of the tavern. Dramatis Personae provides details of the various important non-player characters who can be found at the tavern, both those who run it and some regular visitors. The Establishment contains black and white labelled maps of the interior of the tavern, with a room by room description. For some of the taverns, this also includes an exterior map with descriptions too. Goods & Services has a price list of the various things that can be purchased, as well as descriptions of more specific items, such as unique drinks. The final section, Adventure Seeds, provides a number of brief adventure ideas that can be based out of the tavern, using the information provided earlier.The taverns are The Trireme, The Witch's Teat, The Quintain's Tower, The Horse Lord, Vain Robert's Gibbert, The Lion Rampant, Death and Taxes, Malachai's Public House, The Dagger & Rose and The Four Winds. The book recommends modifying the taverns to fit, and some can be more easily done than others. There are various cultures and races, which can be quite generic, and some taverns are designed more for one type of environment than another.The Trireme is based outside, but near to, a city, and that city is a coastal and port one, as the tavern is built from the remains of a ship. The history of both the tavern and the NPCs in it is one of the less general ones in the book.The second tavern, The Witch's Teat, is a city-based tavern, with an interesting twist in that it has a portal to somewhere else in it through which monsters appear. This is more suited to a city near the edge of the civilised area, near barbarian lands.The Quintain's Tower is in a former castle in what are now wildlands inhabited by ogres and goblins, and the tavern itself is run by a nonhuman. With a bit of adaptation, this can be used in any area beyond civilisation.The Horse Lord is located just outside a town and, by its nature, should be in an area where horse breeding is common.Vain Robert's Gibbert is a dock front tavern, which is the base of an organisation with a very specific aim. Although this aim is unlikely to be easily adapted, it can be quite easily changed to something more appropriate to whatever setting it is used in.The Lion Rampant is a front business for the local Thieves' Guild and, as such, is only suitable for cities that have an active guild.Death and Taxes is an underground tavern in a merchant district, that was built as the result of the rivalry between two merchant families.Malachi's Public House is probably the hardest tavern to adapt to any setting. It is one for more high-powered characters and, at lower levels, has the potential to be either unbalancing or dangerous.The Dagger & Rose is a traveller's inn located on a trade route between urban areas that is also a brigand base.The final tavern, The Four Winds, despite it being the most unusual establishment in the book and, quite possibly, at least technically infinite, is in fact probably the easiest to use as it is actually an entire plane of existence, so it does not require any modification to fit it into a campaign world, as it can be reached from any world, not just one, as it is not actually located on any particular world so, in order to get to it, the GM will just need to add a door to access The Four Winds anywhere desired, because it isn't tied to any particular setting. An inter-dimensional tavern is not that uncommon an idea, but it does add a new set of complications as, just as it can be reached from any world, it can also be used to access other worlds.

The print version of the book was ordered at the same time as Parsantium: City at the Crossroads, and was despatched in the same delivery. This resulted in a noticeable saving in the cost of delivery, as the price for delivering both items was the same as the price for ordering one of them.

Credit: Ed Bourelle/Necromancer Games/eGDC LtdThe book was ordered after normal business hours on a Thursday and was delivered on the following Wednesday, by Royal Mail Second Class postage. A more expensive and faster delivery option was available but, given that the book was ordered, printed, posted and received in under four business days after the order, this would have only slightly improved the service. One of RPGNow's two Print on Demand facilities is in the United Kingdom, which doubtless helped with the speed of delivery.

The quality of the perfect bound softcover edition is fine, probably equal, if not superior, in quality to that of many books that are not print on demand. The colour covers are of a higher quality than the interior pages. Despite the thinner paper used, the images do not tend to show through to the other side of the paper.

The Book of Taverns in Review

The Book of Taverns states that it requires the Dungeon & Dragons® Player's Handbook in order to use it, but much of the supplement can be adapted to other systems. The primary areas where d20 specific information is provided is in NPC and item stats, including new items and spells, and the various races, although these are fairly generic fantasy races. It is therefore rather more generic than is suggested.There is neither a table of contents, nor an index in the book and the PDF version does not have any bookmarks. There may not be that many sections to the book, and they all have a similar layout, but some means of finding a particular tavern quickly would have been a good idea. With the PDF, this can at least be partly done with the search facility, but this is an imperfect method.The details on the various taverns are quite thorough. Creating adventures from the adventure hooks for each tavern will require a bit of work, but there is no reason why the taverns cannot be simply used as fairly detailed locations. Some of them are more suitable than others for quickly generated adventures. The Book of Taverns is a useful supplement, and was good value for money at $7.99 (plus delivery, which was $5.61 for the two supplements ordered) for the print on demand version and PDF. 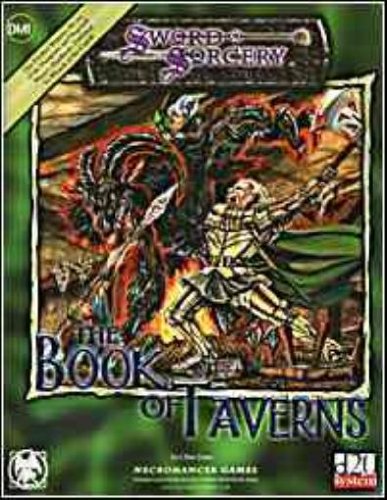