Buy Waterdeep: City of Splendors from Amazon or take a look at the other Waterdeep supplements on RPGNow. You too can earn money from writing articles by signing up for InfoBarrel.
InfoBarrel is a writing platform for non-fiction, reference-based, informative content. Opinions expressed by InfoBarrel writers are their own.
InfoBarrel > Entertainment > Games

The Waterdeep: City of Splendors boxed set by Steven Schend and Ed Greenwood is a supplement and citybook for the Advanced Dungeons & Dragons 2nd Edition, published originally by TSR. Waterdeep was the premier city in the Forgotten Realms setting, which was created by Ed Greenwood before it became the key setting for TSR's AD&D game at that time.The city of Waterdeep was originally covered in less detail the AD&D first edition supplement, FR1 Waterdeep and the North, as well as the City System which, despite its generic name, was actually about Waterdeep. The city was also visited during the module FRE3 Waterdeep, which introduced the 2nd edition game. A further supplement was Volo's Guide to Waterdeep, and the city was also covered at a later date in the D&D 3.5 edition set City of Splendors: Waterdeep.

Credit: TSR/Fred Fields/eGDC LtdWaterdeep, and the Forgotten Realms, have some similarities to the creation of the City of Greyhawk, and the World of Greyhawk, in that both are old - the Forgotten Realms actually predates the original D&D game, as it was first used as a setting for Ed Greenwood's stories, and both cities came about in the home campaigns of the creators due to a large extent to the location of a nearby, massive dungeon - Undermountain and Castle Greyhawk - with the cities providing a resting spot for the players.The boxed set references The Ruins of Undermountain and Volo's Guide to Waterdeep, both of which are set in the city, as well as the Forgotten Realms Campaign Setting Boxed Set and the Forgotten Realms Adventures hardback book. These supplements are useful, but not absolutely essential, to using this supplement.The box set is comprised of the following items:128 page perfect bound softback96 page softback64 page softback16 page booklet6 A1 poster maps16 Monstrous Compendium pagesThe various books have full colour covers, except for the 16 page booklet, and they have a variety of black and white illustrations inside them.

This 128 page book is written by Steven Schend with Ed Greenwood. The book is divided into seven chapters with five appendices and an introduction. The first chapter, Geography & Environs, covers the surrounding area of the Sword Coast, including notable places, settlements and natural features. The second chapter gives a history of the city since its founding, as well as some recent events. The third chapter gives a list of various buildings and businesses in the city, which are marked on the poster maps, as well as some tables for randomly generating certain types of building and some sample floor plans. Some notable buildings also have a more detailed description.Chapter four, Places of Interest & Danger, describes in more detail some notable areas of the city, including the sewers, a bit on Undermountain, and the Rat Hills outside. The fifth chapter describes the Lords of Waterdeep, including their identities, magic and agents. The sixth chapter covers the legal system of Waterdeep, and how it is enforced, and the seventh details magic unique to the city or its residents.The first appendix briefly touches on trade and travel and the second provides some details on the subterranean port of Skullport, which was mentioned in The Ruins of Undermountain, and later got its own entire supplement. The third is on a detailed encounter setting, including a map, and the fourth appendix is a map reference which is used with the poster maps. Also included in the appendix are the old references for sites as used in FR1 Waterdeep and the North, City System, Knight of the Living Dead, The Ruins of Undermountain and Volo's Guide to Waterdeep. The final one is an index to all four books of the boxed set. There are various non-player characters (NPCs) described throughout this book.

This is a 96 page book by Ed Greenwood and Steven Schend which contains more NPCs, in various levels of detail, and various organisation. There are six chapters; the first is about the society of Waterdeep, the second briefly covers the nobility, with their coats of arms, areas of interest, and descriptions of some of the more notable. The third chapter, Monet & the Guilds, covers prices, money, fencing stolen goods and the various Guilds of the city, and their trades. The fourth covers temples and religion, and the fifth, The Independent Factions, has details on adventuring companies, sages, and some more independent NPCs. The last chapter covers several organisations that are opposed to Waterdeep. There are two appendices, one of which gives an example of a day in the life of a Waterdhavian, the second describes The Thirsty Throat Tavern, which also has its own poster map, and expands on the tavern which was covered in Volo's Guide to Waterdeep.

Secrets of the City

This is a 16 page booklet with no cover by Steven Schend with Ed Greenwood. This provides more details on the Adventurer's Quarter, expanding the descriptions of the NPCs and the various events from Adventurer's Guide to the City with details that would only be known to the Dungeon Master, which allows the events to be expanded into adventures.

Two of these full colour maps join together to make a full street map of the city of Waterdeep, including a map of the different wards. Another two are floorplans, both interior and exterior; one of The Thirsty Throat Tavern and the other of Castle Waterdeep. The final two maps are of the Adventurer's Quarter, with a street map, exterior views and internal floorplans of some of the buildings.

These are in the standard format for AD&D 2nd Edition, with statistics, followed by details, combat, habitat/society and ecology of the monsters, with black and white illustrations. Each monster is detailed on at least one side of an A4 sheet with five holes punched in it, and there are 13 new monsters in total.

Waterdeep: City of Splendors In Review

This is a sizeable supplement for a large fantasy city, in which magic is extremely prevalent. It is likely that most residents would encounter magic in one form or another on at least a weekly basis, if not more frequently. It is therefore not suited to a low magic campaign. Although the boxed set is specifically designed for the Forgotten Realms setting, it could probably be adapted with reasonable ease to other settings, by altering some of the more specific details and by ignoring the Geography & Environs chapter in the Campaign Guide.There are very few floor plans, covering only a handful of locations, and these are primarily on some of the poster maps, with some generic floorplans in the Campaign Guide. The most extensively detailed locations are those in the Adventurer's Quarter, as most buildings are intended to be designed randomly.Where the supplement does stand out is in the various NPCs and the various different organisations and groups that players could come in contact with. These are described is quite a lot of detail, and there are a lot of them. There are 76 different noble families alone, each of which has several NPCs. Most of the NPCs are merely given a name, but there are more than a few covered in greater levels of detail.The set will sort of stand on its own, but it really needs at least some of the other supplements mentioned earlier to flesh it out properly, especially Volo's Guide to Waterdeep. The City System is also useful, albeit first edition, as is The Ruins of Undermountain to integrate it in with its dungeon complex. Overall, this does provide quite a bit of detail for a notable fantasy city, especially NPCs and magic, but don't expect a lot of detail on the various buildings.

The boxed set is currently out of print, making it more of a collector's item, and is not currently available in electronic form, but Wizards of the Coast are releasing many old editions on RPGNow, including other Waterdeep supplements, so this one may well appear there at some point. 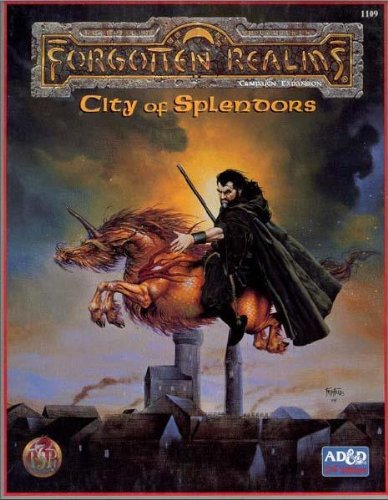