Buy the PDF version of When the Sky Falls from RPGNow or the original print edition from Amazon. You too can earn money from writing articles by signing up for InfoBarrel.
InfoBarrel is a writing platform for non-fiction, reference-based, informative content. Opinions expressed by InfoBarrel writers are their own.
InfoBarrel > Entertainment > Games

A Review of the Role Playing Game Supplement When the Sky Falls by Bruce R. Cordell

When the Sky Falls is a role playing game supplement by Bruce R. Cordell and published by Malhavoc Press, and one the company's Event Books. The supplement was originally intended for the d20 System but, following changes in the license, is now covered by the Open Game License instead. Consequently, some parts of the book are designated Open Game Content.[1] It is intended for use with Dungeons & Dragons game, of at least D&D 3.0, but it should be easily compatible with later versions, such as 3.5, and offshoots, such as the Pathfinder game.The version reviewed was the PDF version of the supplement. It is not available in print on demand, but there are still copies of the original hardcopy version available to buy. This is a 66 page black and white PDF with full colour covers that is available from RPGNow. Two of the pages are the covers and one is an advert. Another page is taken up by the front matter, one by the table of contents and one by the Open Game License. The rest of the book consists of an Introduction and 8 chapters.

Credit: Malhavoc Press/Alan PollackThe one page Introduction covers why a DM would want to hit his campaign world with a meteorite, and why they wouldn't want one large enough to wipe out all life or civilisation, what Malhavoc Press's Event Books are - they are designed to introduce a major event into a campaign - and how to use this book.The first chapter, The Impact Site, covers three primary types of meteorite, Mundane, Thaumaturgic and Engram Ark. The first is the standard, normal meteorite, the second is a meteorite of some sort of magical origin and the third, Engram Arks, are a type of meteorite of a unique origin that have been dispersed by a planet that was falling to an evil entity known as the Dark Plea. Covered in this chapter are the effects that a meteorite will have on the environment, including magical, where relevant, and the new skill of Astromancy, and substances that can found there and their effects. Finally, the chapter briefly lists sixteen other potential meteorite types, five of which are covered in more detail in Chapter Eight.Chapter Two, Integrating the Event, covers how to integrate a meteorite fall into your campaign, both before and after it happens. This includes physical changes to the landscape, as well as two new organisations, with sample non-player characters from both, and how to use them, and what adventures could evolve from the fall. A list of further potential adventure hooks is given at the end of this chapterThe third chapter, Prestige Classes covers four new prestige classes related to meteorites, and the Dark Plea.Chapter Four, Feats of the Afterfall, has new feats related to meteorites, twelve in all.Spells, the fifth chapter, has 38 new spells that are available, many of which require the use of engrams from an Engram Ark, and spell lists showing what classes can learn them.Chapter Six, Afterfall Magic Items, has two new weapon abilities, three new weapons, two staves, four wondrous items and two artefacts. Several of these are related to Engram Arks and the Dark Plea.Monsters, Chapter Seven, details five new monsters, three of which are related to Engram Arks.The final chapter, I Found it in the Crater, covers, in more detail, adventure ideas for five of the other potential meteorite types that were mentioned in Chapter One, The Impact Site. Some of these have the potential to be a significant influence, or threat, to any campaign world.

The PDF is adequately bookmarked and the table of contents is fine. The interior is well laid out and there are a variety of black and white illustrations throughout, which have been created specifically for the book rather than being stock images of any type. There are checklists throughout the various sections of the book, which are useful for integrating the relevant material in a step-by-step manner.This is one of only three Event Books published by Malhavoc Press; one of the others, Requiem for a God, is referenced a few times in this book, as a potential source of a thaumaturgic meteorite, and suggests ways to use the material from that supplement.Like many Malhavoc Press books, there are references to bonus material available from the website and, like all the others, this material is no longer available on the site, as the site in question was completely redone and the prior content removed, and not apparently replaced anywhere else.As well as Requiem for a God, there are references to quite a lot of other supplements within the book, and not just the three core rulebooks either - the Player's Handbook, Dungeon Master's Guide and Monster Manual. There are also an awful lot of references to the creature known as the Dark Plea, which is not covered thoroughly in this supplement but, instead, is primarily covered in another book, Hyperconscious: Explorations in Psionics.A substantial proportion of all the material, including the prestige classes, organisations and NPCs, magic items, spells, event hooks and monsters, relate to the Engram Ark event from Chapter One, and that event, and therefore all of the related material, is tied to the Dark Plea. Consequently, quite a bit of this book does not stand too well by itself, as it really needs access to more material on the Dark Plea.That material which is related to mundane and thaumaturgic meteors, rather than the Engram Ark, certainly provides some interesting ideas and things to shake up a campaign, rather literally, by throwing large chunks of matter at it. This is really more of a one off use, possibly with long-term effects, rather than something ongoing, as having a world constantly being hit by meteorites could wear thin quite quickly - unless this is tied into a campaign related to stopping whatever is causing them.The Engram Ark meteorite type, which certainly has the greatest potential to be built into a full campaign, really needs the material on the Dark Plea in order to develop it fully. Certainly, it could be done without this, but the Dark Plea is fundamental to this meteorite type.When the Sky Falls has some good ideas, and gives some useful idea for adding a new and interesting even to a campaign, but to get the best use out of it, it looks like it really needs to be accompanied by Hyperconscious: Explorations in Psionics. 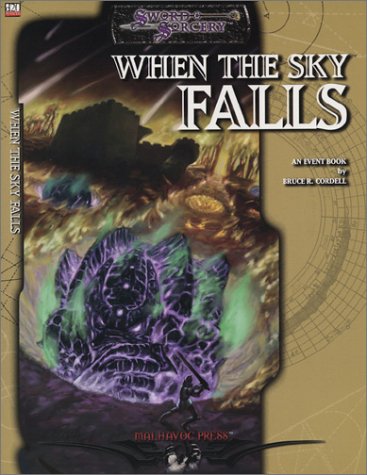