Get City of Delights or other Al-Qadim supplements in PDF from RPGNow. You too can earn money from writing articles by signing up for InfoBarrel.
InfoBarrel is a writing platform for non-fiction, reference-based, informative content. Opinions expressed by InfoBarrel writers are their own.
InfoBarrel > Entertainment > Games

A Review of the Role Playing Game Supplement City of Delights by Tim Beach, Tom Prusa and Steve Kurtz

City of Delights by Tim Beach, Tom Prusa and Steve Kurtz is a role playing game supplement and citybook published by what was at that time TSR, Inc. and is now Wizards of the Coast for the AD&D 2nd Edition game. The supplement is for the Arabian Nights-influenced Al-Qadim setting set in the land of Zakhara, which is located on Toril, the world of the Forgotten Realms and Kara-Tur, as well as lesser settings such as Maztica and The Horde, in particular on a peninsula of the main Forgotten Realms continent of Faerûn. The Zakhara setting is intended to be usable on other campaign worlds, however.

Credit: Robh Ruppel/TSR/Wizards of the Coast/eGDC LtdCity of Delights was originally available as a box set, of which copies can still be found, but it is now available in PDF from RPGNow. The version reviewed is the original box set, rather than the PDF.The box set is comprised of the following:Two 96 page saddle stitched books8 A4 colour reference cards8 Monstrous Compendium sheets2 colour A1 mapsA4 transparent map overlay with hexes and a scale marked on it 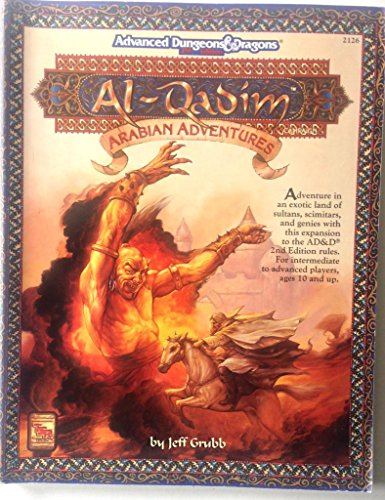 Credit: Robh Ruppel/TSR/Wizards of the Coast/eGDC LtdThis is Book 1 out of the two books, although it is stated at the beginning that the books can be read in any order, although elements in each book will not truly make sense until the other book is read. There is no way around this, though. Of this 96 page book, one page is front matter, two pages are the Contents and Guide to Major Illustrations and four pages are decorative padding. Throughout this book there are abbreviations used in the descriptions of many non-player characters which may be hard to make sense of until Golden Huzuz is read, as it is in that book that the abbreviations are actually explained. This first book describes the city itself. Each chapter has an introduction written by a genie serving in Huzuz; these make out that the books are a report to his ruler.Introduction is an overview of what is in the boxed set and gives a very short introduction to Huzuz and lists the contents of the boxed set and what they are to be used for.Chapter 1: Overview of the City gives, as it says, an overview of Huzuz, namely its architecture, cosmopolitan nature, education, economics and a brief history and some descriptions of areas beyond the walls.Chapter 2: The Warehouse District and Harbour covers these two districts, several organisations, an important college and some rules on proficiencies and taking classes.Chapter 3: The Caravan Districts and Trade Routes covers those districts, and the gates into the city, as well as the major land and sea trade routes.Chapter 4: The Grand Bazaar and Scattered Shops covers the bazaar, prices, haggling, some merchant houses and various shops both within and without the bazaar.Chapter 5: The Pilgrim's District and the Great Mosques covers the major mosques of the city and some other places of interest.Chapter 6: The Court Districts and the Palace of the Enlightened Throne has details of these areas, as well as a subterranean lair and some other buildings of interest.

Credit: Robh Ruppel/TSR/Wizards of the Coast/eGDC LtdThis is Book 2 of the set. At the beginning of this book there are explanations of the various abbreviations found with NPC descriptions that are found in this book and in Book 1, Gem of Zakhara. As with Book 1, each chapter again has an introduction by the same genie. This book focuses primarily on non-player characters and organisations in the city, even though some NPCs were actually covered in the first book. This is again a 96 page book, with one page front matter, two pages of Contents and Guide to Major Illustrations and four pages of decorative padding.The major portion of the two page Introduction covers the various race, sex, class and kit abbreviations used in this book and the previous one.Chapter 1: Daily Life in Huzuz covers religion, customs, money, illegal ventures, occupations, the law, holidays and racial makeup of the city.Chapter 2: Law, Politics and Government covers the legal code, albeit briefly, the military and its composition, the government and its organisation, including the various religious hierarchies and foreign affairs, which include references to the Spelljammer worlds and to other planes.Chapter 3: Powerful Groups of Huzuz covers the major power groups of the city, including the royal family, merchant families, others loyal to the crown and various opposed groups.Chapter 4: Personalities of Huzuz covers various important non-player characters who are not typically tied to a particular power group, and various, more minor, characters that players could meet.Chapter 5: The City of Delights Campaign has some notes on running city campaigns, incorporating players into them, a brief section on running humanoid PCs, and a few legends of the city of Huzuz.Chapter 6: Adventures in Huzuz considers using the city as both an adventure base, and as a source of adventures in itself. There are sixteen adventure hooks, which are at most a few sentences in length, four longer adventure ideas, and several pages on adventuring beneath the city, with an underground complex detailed.Appendix A: New Magic of Huzuz describes four new spells and a new magic item.

There are eight of these A4 cards, which are intended for players. Each has a colour front with text on the back. The first four cards have an unlabelled map of a quarter of the city on the front and on the back brief overviews of the various districts and some details on city life. The second set of four cards just has an illustration on the front with a glossary on the rear.

There are two colour A1 maps, accompanied by an A4 transparent overlay that has various scales marked on it. The first map is of Huzuz itself. This has various locations labelled on it, and also has descriptions of the neighbourhoods and explanations of the neighbourhood colour codes. The second map is another labelled map, this time being a floor plan of the Palace of the Enlightened Throne.

The eight sheets detail 16 different monsters, with sub-types in some cases. These have separate A4 sheets, with a monster on each side, that have five holes punched on the side. There are black and white illustrations of each monster on the sheets.

City of Delights in Review

The covers of the books, the box, the maps and the reference cards are all in colour. The interior illustrations are all in black and white and, because they are all done by the same artists, are consistent in style. The decorative borders and padding within the books are all in gold, giving a rather, luxurious appearance to them. There are also a number of black and white labelled maps of a handful of buildings.

There are quite a few references to material from the Arabian Adventures book, and to a lesser extent the Land of Fate boxed set, and without access to one or both of these, some of the material in this set may not make sense, such as various class kits and especially the frequent references to genies, religion and the law. The law is the Law of the Loregiver, which is covered in detail in Land of Fate, and only those areas where local laws differ are covered in this box set. Really, all three supplements need to be taken together, even if using the city in another setting without the rest of Zakhara, so a DM would at least have access to the material and information needed to properly run the city. As well as these three major supplements, there are also references to some of the others released for the Al-Qadim setting, especially in Golden Huzuz.

City of Delights is a very high magic setting, and various genies are commonplace, some of whom are used for often quite menial tasks. This is also a very cosmopolitan setting, even for a fantasy city, with members of many races who, in the more typical setting, would not be as welcome as they are in this city.Although City of Delights is set on Toril, and there are references to other lands of Toril such as Kara-Tur, Maztica and various northern realms and cities, such as Calimshan, Lantan and Waterdeep, these are comparatively minor and the Al-Qadim setting could easily be used on another world. Using the city on its own, however, without the rest of the setting, is a bit harder, and would require more work, such as changing the various trade routes. The city of Huzuz by itself doesn't really work without a suitable setting to place it in, in this case Al-Qadim - it cannot be easily dropped as a free city, for example, into another setting. This isn't impossible, but it would be difficult.

Credit: karl Waller/TSR/Wizards of the Coast/eGDC LtdHuzuz, with a population of 800,000, will seem enormous, especially when considered with typical fantasy city sizes. However, historically, Baghdad - one of the principal real-life inspirations for the entire Al-Qadim setting - had, in the appropriate era, a population (by some estimates at least) of over one million, making this number probably more realistic than might be thought at first glance. The statement that the city has an up to an equal number of visitors and pilgrims regularly visiting it seems a little more dubious.With regards to the Monstrous Compendium sheets, when the AD&D 2nd Edition Monstrous Compendiums originally came out they were in loose leaf binders, to which it was intended to be easy to add new monsters to. By the time this supplement was released, this was no longer as easy, as each monster sheet, instead of simply detailing one new monster, had two, one on each side, meaning it wasn't possible to simply slot the monsters in alphabetically as originally intended as those on the reverse of each sheet would be out of order. This makes the fact that they were separate and hole punched rather irrelevant.City of Delights certainly has a, fictional rather than historical, with an emphasis towards Hollywood, Arabian feel, but to make the best use of it really requires Arabian Adventures and Land of Fate supplements, and possibly some others as well, as otherwise working out what some of the supplement's contents mean will be down to guesswork. The entire Al-Qadim setting may be intended to be comparatively easy to drop into other campaign worlds, but City of Delights by itself isn't.