I am a retired teacher of English as a second language. I teach on line via Skype, and write on-line articles which reflect my love of travel, language, literature, history and culture. I love writing for InfoBarrel. Why not join me by signing up here: http://www.infobarrel.com/signup.php
InfoBarrel is a writing platform for non-fiction, reference-based, informative content. Opinions expressed by InfoBarrel writers are their own.
InfoBarrel > Lifestyle > Productivity

A Waste of Daylight: Fun Facts About Daylight Saving Time

Daylight robbery occurs every spring when we lose an hour's sleep because Daylight Saving Time (DST) forces us to move our clocks forward one hour.

Most people living in countries that observe DST regard it as a mildly annoying spring time ritual and do not give much thought to its history or why they are changing their clocks. But in case you were wondering, here is all the information about Daylight Saving Time that you will ever need.

Where is DST Observed?

DST is observed1 in Europe, most of North America, parts of the Middle East, South America and Oceania. The only major industrialized countries that do not change their clocks are Japan, India and China. In the northern hemisphere DST begins between March and April and ends between September and November. In the southern hemisphere the schedule is reversed.

DST forces people to get up earlier, make better use of long summer days, and use less energy in the evening. Because the length of days changes so little year-round close to the Equator, there is no potential benefit for tropical countries to observe DST.

On the other hand, even though Antarctica has an over-abundance of summer sun, a full 24 hours of broad daylight at midsummer, many research stations observe Daylight Saving Time in order to synchronize their schedules with supply stations in Chile or New Zealand2.

While most of the United States observes DST, there are two exceptions.  Hawaii, which is in the tropics, and the rather strange case of Arizona where I have been spending the winter months. When I arrive the state is on mountain time. In March, however, when the time changes in other states nobody messes with Arizona clocks, and the state joins the Pacific time zone for the summer.  But this is not the whole story. The Navajo Nation, which straddles three states, makes its own rules, and chooses to join the rest of the U.S. in observing DST.  Then to add to the complication, the Hopi reservation, which sits plumb in the center of the Navajo lands, goes along with the rest of Arizona by not observing DST. This creates what has been called the "DST donut", an area observing DST that has a hole in the center.2

If it were possible to turn back the clock to 1914, there would be no daylight saving time. Although the idea was first suggested by Benjamin Franklin in the 1770s, the idea was not taken seriously for another hundred and twenty years.

Practical proposals for making better use of summer sunshine arose from the minds of two hobbyists. The first, George Hudson of New Zealand, was an entymologist who wanted more time to collect insects, and who published a paper on the topic in 1898. The second was British golfer William Willett, an early riser who observed his fellow countrymen sleeping through bright summer mornings while he was forced to cut his golf game short at the onset of dusk.

Credit: By William Willett (1858â€“1915) [Public domain], via Wikimedia CommonsWhen DST was first introduced in Britain, protesters demanded the return of the stolen hour. Patrons of late night bars in the United States have been known to riot in protest of losing an hour of drinking time.2  Farmers complained that dairy hands had to get up an hour early to milk cows who were blissfully unaware of human tinkering with daylight hours, and that  farm laborers had to sit and wait for the sun to dry from hay mown the day before. 5

It is generally believed that the first country to implement DST was Germany. However, it is a little known fact that Canada actually beat Germany to the punch by one week when Winnipeg and Nova Scotia turned their clocks forward on April 23, 1916.6

DST was used throughout Europe during World War I as a way to reduce the use of fuel for lighting and heating5. It was also introduced in the U.S.  by an act of Congress 1917, but the act was repealed in 1919 in response to widespread public protest.

During the Second World War clocks in Britain were permanently moved ahead one hour, and were moved ahead two hours in the summer, which was known as Double Summer Time.7

Changing the clocks can result in some bizarre situations.

In 1999, West Bank terrorists got confused about the timing on bombs they had built to use against Israel because the West Bank was on Daylight Saving Time and Israel was not. Karmic justice was served when the bombs exploded an hour early, killing the terrorists instead of their intended victims.

When the clocks fall back at two o'clock in the morning, all Amtrak trains in the U.S. stop for one hour.  When the clocks move forward in the spring, all the trains fall an hour behind schedule.

As a result of the spring time change, no babies are born between 2 and 3 a.m. on the day of the change.

Laura Cirioli of North Carolina gave birth to twins in November 2007 when the clocks were due to move back.

Peter was born at 1:32 a.m. and his sister Allison was born 34 minutes later, after the clocks changed. Allison’s time of birth was recorded as 1:06 a.m, thus making her legally older than her elder brother.

What Are the Benefits?

As the video below points out, although people generally believe that Daylight Saving Time benefits farmers, this seems to be nothing more than an urban legend.

On the other hand, studies8 have demonstrated that burglary, violent crime rates, traffic accidents and pedestrian traffic deaths fall significantly when summer evenings lengthen. Retailers also benefit, and golf courses in the U.S. reap an extra $400 million a year because of extended evening playing time.9

The main argument in favor of DST is that it saves energy because less electricity is used for lighting and heating during extra long summer evenings. A 1970s study by the U.S. Department of Transportation estimated that DST resulted in an overall 1% energy saving nationwide. A later study concluded that a four-week extension of DST saved the U.S. 1.3 trillion watt-hours of electricity or enough to power 100,000 households for a year.9

Consequently, the American Council for an Energy-Efficient Economy advocates extending daylight saving time as a means of reducing carbon emissions.7 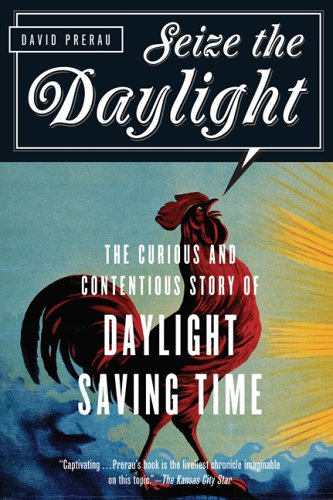 Seize the Daylight: The Curious and Contentious Story of Daylight Saving Time Amazon Price: $17.99 $8.17 Buy Now(price as of Oct 17, 2016)
Available in a Kindle edition

So What's the Problem?

Having to change all the clocks in the house twice a year can just be a darned nuisance. In addition the time change interferes with sleep patterns, disrupts transportation schedules and makes life difficult for farmers.

The energy-saving effectiveness of the time change is also being challenged. An analysis of power usage in Indiana since it began DST in 2006 found a 1 percent increase in electricity usage which researchers attribute to increased demand for both air conditioning and heating.9

But for the time being, it looks as if Daylight Saving Time is here to stay. So you and I, like millions of other long-suffering people around the world, will just continue to deal with losing an hour of sleep every spring, secure in the knowledge that we will get our lost hour back again in the fall.

Next >> 5 Easy Ways to Get More Volunteers