Add Seaweed to your Diet Plans and Feel the Benefits

As surprising as it may sound, that slimy looking stuff that washes up on lots of beaches around the world could be the answer to many people’s prayers and problems in the weight loss battle ground. There have been new discoveries over recent years that simple seaweeds such as kelp, nori, and wakame can reduce the uptake of fat in the body by more than 75%

The discovery took place at the University of Newcastle in England. They found that sea-kelp contains alginate, which is a natural fibre and stops fat absorption at a far more convincing rate than any obesity treatment presently available. Alginate is odour-less and colourless and so it would make a perfect food additive.

Seaweed derived alginates are already used in small quantities in the food industry as thickeners and stabilizers and are also in a range of things from paint to cosmetics. Trials have begun as a result of the findings from Newcastle University using it as an additive in bread and so far results have been positive with people stating that the bread had a better texture, a big plus is the fact that fibre content of the bread is increased four-fold.

Alginates are a high fiber, low-calorie and zero fat organic product. Their performance with fat molecules would make it a massive contributor to the weight loss industry where obesity is now a major world-wide problem.

There is yet more evidence looming of the fat loss possibilities of seaweed. This is due to a compound called fucoxanthin. This is found in seaweed and seems to have the quality of stopping people from gaining weight. It is found in the highest amounts in wakame, which is a brown seaweed that is often used to flavour soups. So far, tests have only been carried out on animals, but in all cases, rats and mice lost abdominal fat and up to 10% of body weight. How it functions is still unclear but it seems to stimulate a protein called UCP1, which then increases the fat-burning rates of adipose tissue, which is found in the abdomen and is closely linked to diabetes and heart disease.

You would need to eat a very large amount of wakame to obtain enough fucoxanthin to have an effect, but if the tests prove effective it could make a very impressive,and natural, supplement or weight loss pill.

Seaweed also has other great health benefits. It is a great source of complex carbohydrates and protein, supplying a list of vitamins and minerals that includes: vitamins A,B,C,D,E and K, amino acids and essential fatty acids, it also contains: Potassium and Zinc, Magnesium, Iron, Calcium and Copper.

The supply of trace elements and minerals in earth-grown food is becoming depleted year upon year due to over-farming and the use of pesticides and various other chemicals. Sea grown greens can supply ten to twenty times more minerals and trace elements than land plants.Iodine has been distilled from seaweed since the 1800’s. Iodine is the main mineral responsible for helping the thyroid to create thyroxine, which in turn helps the thyroid gland to regulate metabolism and cholesterol. Healthy thyroid function helps weight loss and boosts energy levels, libido is boosted too. If iodine is in too little supply the result can be fatigue, weight gain and goitre which is a swelling of the thyroid gland.

Seaweed has been used as a food source in the east for centuries. It is most commonly used in China who supply 60% of the world's production. It is believed that seaweed is a key reason for the low incidence of cancer and obesity in the east.

Seaweeds are brown, green and red. Red and brown are only found in sea water but kelp is found in fresh water too. All are safe to eat providing they come from unpolluted water.

There are 5 well-known seaweeds:
Nori usually comes in flat sheets which are dried. It has become popular with the increase in sushi consumption across the globe as it is nori seaweed that wraps the rice for sushi.

Credit: pakorn at freedigitalphotography.net
Wakame is full of goodness and can be used for healthy snacks and salads. It is often used for soups and particularly Miso soup, which is a traditional eastern soup.
Dulce is found off the coast of Ireland, Scotland and Wales and Canada. It is rather salty tasting and can be used as a salt substitute.
Kombu is a kelp and good for healthy thyroid function and for lowering blood-pressure and cholesterol.
Hijike is mild flavoured and high in Calcium and Iron. It will swell to 3 or 4 times its size when added to water and is used commercially as a thickening agent. It also has potential in the weight loss industry as an appetite suppressant.
Seaweeds and kelps are high in Omega-3 and Omega-6, vitamins, minerals and amino acids. They are a great healthy food that can be added to many recipes. It is a simple matter to add dried seaweed to stews and casseroles, they can be eaten as vegetables and mixed with salads.

Credit: chokphoto
There are many ways of including seaweed in your diet, combined with other healthy foods you will have a tasty and highly nutritious snack or meal.
With the astounding weight loss and health benefits of seaweed it seems destined to become a more common addition to our diets. 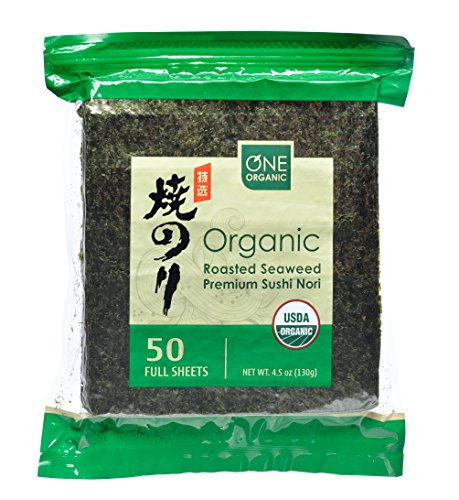